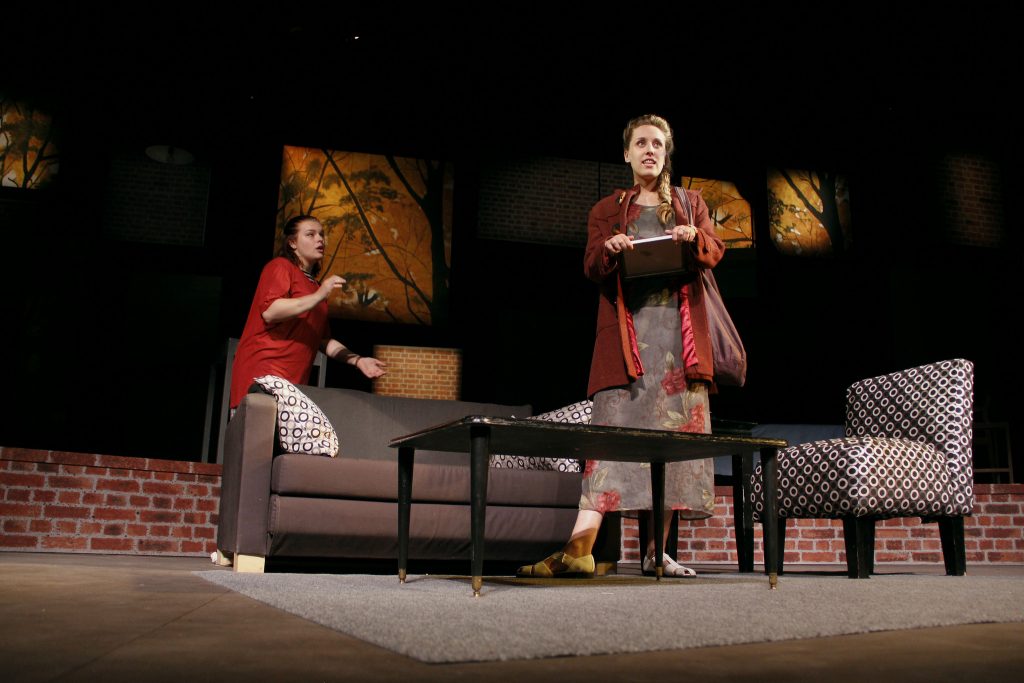 The familiar sound of popcorn kernels firing away in the microwave signals the beginning of movie night at the home of SF State theatre majors Lauren “Lo” Prentiss and Rosie Anderson. While the two share giggles from the comfort of their living room on weekend nights, the roommates’ prose is far different during the week as they prepare onstage for their lead roles in “Stop Kiss,” debuting at the Little Theatre Friday, Oct. 9.

“In each story line of ‘Stop Kiss,’ the playwright Diana Son traces the history of their romance,” said Roy Conboy, director of “Stop Kiss.” “In the ‘before,’ we follow the ups and downs of their attempts to get together. In the ‘after,’ we follow the ups and downs of whether they can ever be together while the forces of the outside world bear down on their relationship.”

Much like their roles on stage, the duo said their friendship also shares a special meaning.

“The whole play is about evolving friendship, and I think anyone who has a best friend can relate to the situations these characters are put in,” Anderson said. “Both Lauren’s and my characters realize how special their friendship is, and that is why they fall in love.”

Prentiss and Anderson met during the Spring 2013 semester in an acting class their freshman year and later found a house to rent in the summer of 2013 in the Sunset District with two more roommates.

“Lo and I decided to live together because we had grown to be great friends, and she needed a new place to live, and I wanted to change my living situation, so we got together with two other girls and found a house,” Anderson said.

The two friends have had experience in other shows at SF State, but “Stop Kiss” will be their first time on stage together.

“We have both been cast as lead roles in the past at SF State, but this is the first time we’ve gotten cast as leads in the same show and worked on anything together,” Prentiss said.

“Stop Kiss” follows the journey of two women who develop a friendship unlike anything they’ve ever had before, according to the play’s director Roy Conboy.

Conboy said he did not know about Prentiss and Anderson’s friendship off stage, but said he can see how it translates to their chemistry on stage.

“The trust that actors who are friends bring into the room can be an asset if it helps create a safe space to explore difficult emotions and I do feel like that’s how things are going for these two,” Conboy said.

The theatre majors said they can both relate to their stage characters, but also said they found differences between themselves and the person they portray on stage.

“I definitely relate to my character, and I believe Lauren does too,” Anderson said. “Lauren’s and my relationship off stage has never gotten romantic, so it’s different in that way, but we can both relate to the friendship.”

Prentiss also said she relates most to the characters’ friendship in “Stop Kiss” and appreciates Anderson’s support both on and off stage.

“I relate completely to the friendship my character has with her best friend. Rosie and I have a great dynamic both on and off stage,” Prentiss said.”It’s awesome doing this emotionally taxing show, because when we’re up there, she’s my partner and I know she’s got my back and I have hers.”

As the director of “Stop Kiss,” Conboy said he personally identifies with the challenges the two main female characters face, which is why he chose to showcase this production at SF State.

“The play tells a very human story of struggle for many people who have been marginalized in their lives because of their sexuality,” Conboy said. “As a Chicano artist, I identify with their struggle. I’m doing it for them.”