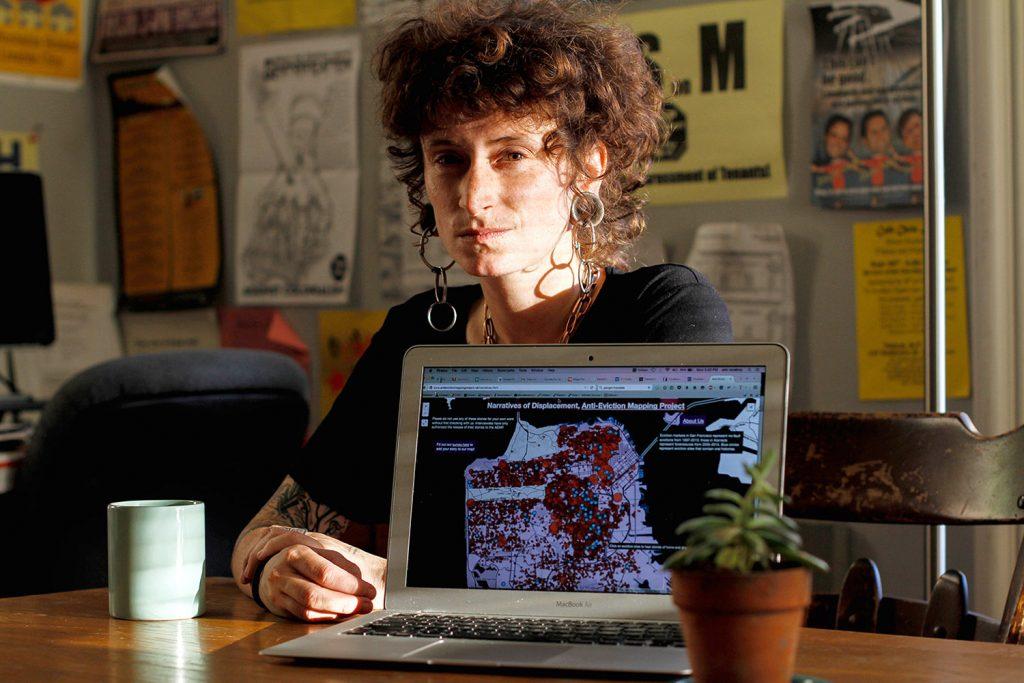 As San Francisco’s housing crisis continues to snowball, the Anti-Eviction Mapping Project has set out to illustrate the effect of eviction through visual storytelling.

The mapping project was featured at the Incline Gallery in the Mission earlier this year as part of “The Dissidents, the Displaced, and the Outliers” exhibit. The exhibit featured five other artists, and each showcased their work critiquing the surrounding gentrification and digital surveillance within the Bay Area, according to exhibit curator Dorothy Santos.

Erin McElroy, director and co-founder of the mapping project, which started in 2013, presented an interactive time-lapse map in the exhibit that showed the accumulation of Ellis Act evictions that have been happening in San Francisco since 1997.

“I know more people than I can name who have been evicted, just over the last few years,” McElroy said. “Not only are people being pushed out, but cultural formations and social worlds are also being evicted left and right. It’s heartbreaking, really.”

McElroy said that the project staff is currently working on expanding their oral history project to Alameda County to further capture stories of people who have suffered evictions in the greater Bay Area.

The Incline Gallery has hosted many exhibits centered around the housing crisis, including the recent exhibition, which ran from May 16 to June 19.

Christo Oropeza, co-founder and co-director of the Incline Gallery as well as an SF State fine arts alumnus, said that the gallery is located in what he identified as a post-gentrified location. He said that, because of that, they must recognize the impact that they have as a gallery in the Mission.

“Nobody had done a show like that ever (before), and I feel like galleries are a little hesitant to participate in contemporary conversations that are not related to aesthetics,” Oropeza said. “But why have fear? Art is one of the most challenging but transformative things, and if it’s one of the last things we have in our arsenal to combat ignorance with knowledge, then present it.”

The exhibition illuminated the impact of digital surveillance technology, as well as how privacy is not free and rather secured by wealth, according to Santos.

Dorothy Santos poses for a portrait in her home in Park Merced behind an art piece by Elizabeth Travelslight featured in the Housing Exhibition at Incline Gallery Oct. 7 2015. (Angelica Ekeke / Xpress)

Santos, who also said she has experienced struggles with the high cost of living in the city, said that she wanted viewers to see the exhibit as a conduit to discussing the issue and as a means to make change happen.

“The more vulnerable you are, the less privacy you have, and you’re almost beholden to the government and your community,” Santos said. “When you’re affluent and rich, you can buy your privacy, and you can get the things that you want to feel comfort, but a lot of the population doesn’t have that luxury.”

Eliza Barrios, an SF State alumna of 1992 who graduated with a bachelor’s degree in photography, was another artist featured in the exhibit. Barrios said that she created a site-specific installation using video projection as her medium. Barrios wanted to use technology in all its forms to highlight the increasing gentrification issue that the tech boom and policy makers have helped grow, she said in an email.

Santos said art is used as a major vehicle to showcase the struggles posed by the housing crisis that has consumed San Francisco.

“The really touchy, sensitive issues that people are kind of skirting around are actually the very issues that people should be making art about,” Santos said. “Art has the power to actually draw out and engage a lot of the things that bother us or cause discomfort.”