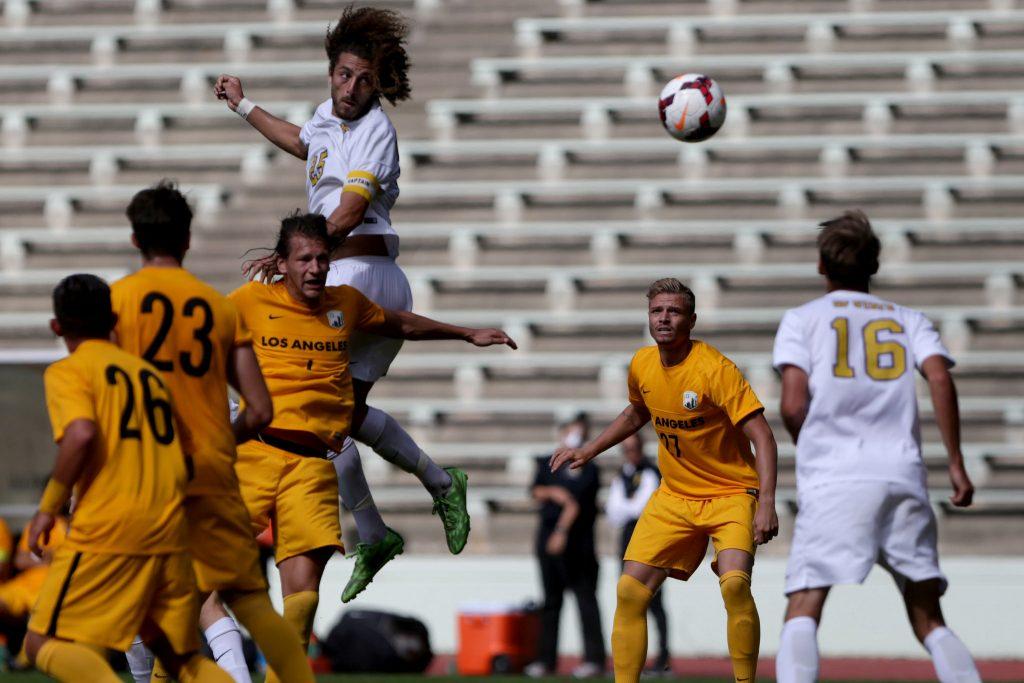 The SF State men’s soccer team continued to be plagued by offensive inefficiency today, failing to score a goal in their fifth consecutive game. The Gators lost to the Cal State Los Angeles University Golden Eagles 0-1, which is their first loss at home this season.

The game-winner for the Golden Eagles came in the 79th minute, when CSULA midfielder Jose Bucio fired a shot on goal that was blocked by SF State goalkeeper Emmanuel Jimenez. The ball ricocheted off Jimenez’s hands, and CSULA forward Troy Dumlao was able to easily kick the ball past Jimenez on the rebound because Jimenez was sprawled on the ground after the initial save.

“We were out of position on a dead ball,” said head coach Matt Barnes. “The ball rebounded; we didn’t get pressure and they came in and finished.”

The Gators were able to muster 16 shots on offense, but were unable to capitalize on multiple scoring opportunities.

In the 29th minute, forward Ashley Watson crossed a beautiful ball into the box to Daniel Totays. Totays was unable to finish the play, as the ball slid off his right foot and went wide-right of the net.

The Gators came within inches of a goal in the 67th minute, when center back Max Talbert headed a ball that bounced off the inner part of the upper right corner of the goal. The ball was inches away from going in, but popped back into the field of play.

“I thought that ball was going in for sure,” Talbert said. “It went right off the goal. I was ready to start celebrating with my parents in the stands watching me. It’s just unlucky.”

After Talbert’s shot careened off the goal, Jakob Velega had a chance to shoot the ball in the net. Velega slid on the shot though, and the ball sailed high, harmlessly over the head of the Golden Eagle’s goal keeper.

Gator midfielder Robert Kelly led SF State with three shots, one of which was on goal.

“Some of the teams we’re playing just have great defenses,” Kelly said. “They put their bodies on the line and put effort into every save.”

The loss is a huge blow for the Gators, who have a 1-4-3 conference record on the year, putting them near the bottom of the standings.

“We outplayed LA in almost every aspect of the game,” Barnes said. “We outshot them 7-1 in corner kicks, and we applied more pressure during the game. It’s just been the story of our season, we outplay teams but we don’t finish.”

The Gators will look to keep their playoff hopes alive this Sunday, against sixth ranked Cal State Dominguez Hills University.