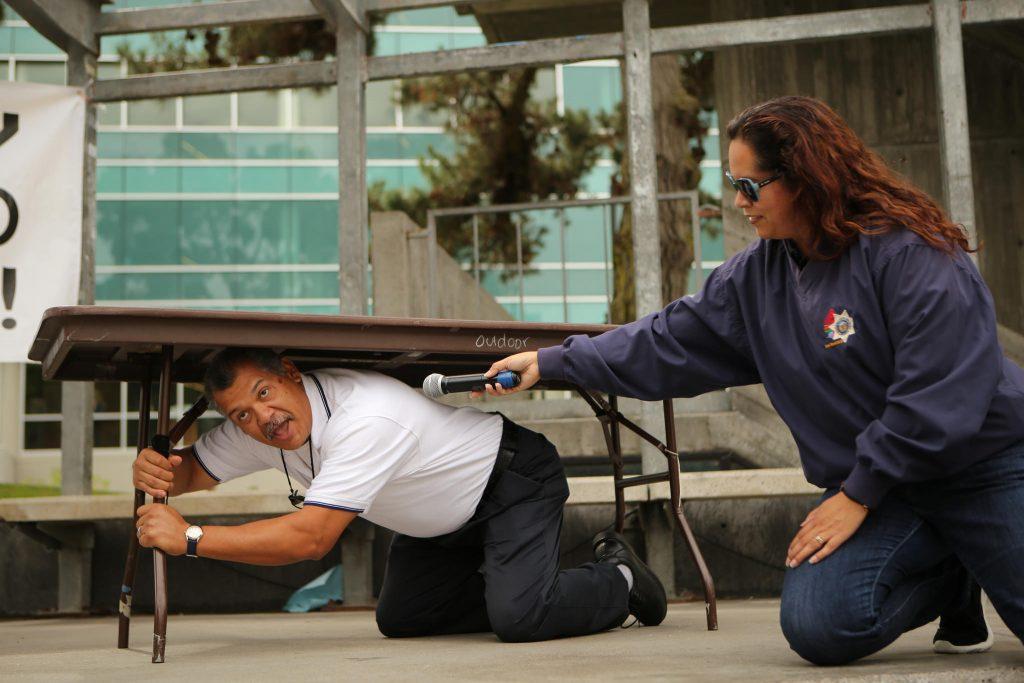 To prepare students, faculty and staff in the event of a disaster, SF State conducted the Great California Shakeout Oct. 15, which tested the emergency notification system and all the University’s modes of communication.

A recorded tape of an earthquake rumbling was played in the quad while Sgt. Abraham Leal, interim coordinator for the University Police Department’s office of emergency preparedness, spoke through a microphone instructing students to duck, cover and hold on. Only a few people participated in the “Quake the Quad” event by kneeling on the ground and covering their head with their hands, while many watched.

The University sent out a memo and an electronic message to inform the campus of the event, according to Leal. Students received an automated phone call, email and text message notifying them of the drill and telling them to drop to the ground, take cover under somewhere sturdy and hold on to it until the shaking stops, according to the email.

Peter Mansour, a BECA major, said he doesn’t feel prepared in the event of an emergency, but said the University should prepare students for it much earlier.

“Everyone has to do the orientation program before coming here, so that would be the best way for students to learn about earthquake preparedness,” Mansour said.

Nadim Bolous, a civil engineering major, said he did not know that the “Quake the Quad” event was taking place, but thinks the event could be very helpful to students.

“I wish I had known before about the event, but I think it’s a great idea for students to be educated on safety, because you never know when an earthquake is going to hit — they just happen,” Bolous said.

The Great California Shakeout started as a state-wide effort by scientists and emergency managers in 2008 to prepare California citizens for earthquakes, according to the event’s website. The drill requires people to drop, cover and hold on for a full minute wherever they are, unless they are driving. No power outages or freeway shutdowns are administered unless individual cities or counties choose to.

“Every year this drill is done because, back during Loma Prieta in 1989, people were injured from things falling onto them, and so we are trying to inform students of ways to prevent injuries,” Leal said.

Leal said he recommends people plan an emergency pack that will be able to sustain them for 72 hours, which is the amount of time it could take to reach medical assistance. The website 72hours.org can inform people of what they would need in an emergency pack, according to Leal.

While SF State has procedures in place, Leal said the school relies heavily on making sure students, faculty and staff are prepared and aware of how to react in the case of an emergency.

“Our most important resource is the campus community — informed, prepared students, faculty and staff greatly enhance our ability to survive any major disaster,” Leal said.

Preparations have also been made for students who live on campus in the event of an emergency, according to Leal.

“The SF State residential life department, along with University Property Management, have robust plans to provide food and shelter for campus residents in case of a major disaster,” Leal said. “Our student health services also has contingent plans for the provision of medical triage and treatment that will be enacted not only during a natural disaster, but also in response to a public health emergency.”

SF State will start training Oct. 19 on what to do in the event of a disaster for those who have signed up for the event.

The training, in collaboration with the San Francisco Fire Department, will teach people how to be better prepared in the case of an emergency and how to become more self-sufficient, according to Leal, who said SF State has backpacks and duffel bags ready with emergency equipment such as vests, helmets, food, water, first aid kits, lights and more.

SF State has taken steps toward preparing for other emergencies, according to Leal, who said faculty will go through an active shooter training in November to help prepare the campus for the possibility of an shooter. There have been 47 school shootings so far this year, according to ABC News, so faculty at SF State will go through a training to be better prepared to protect the students, Leal said.