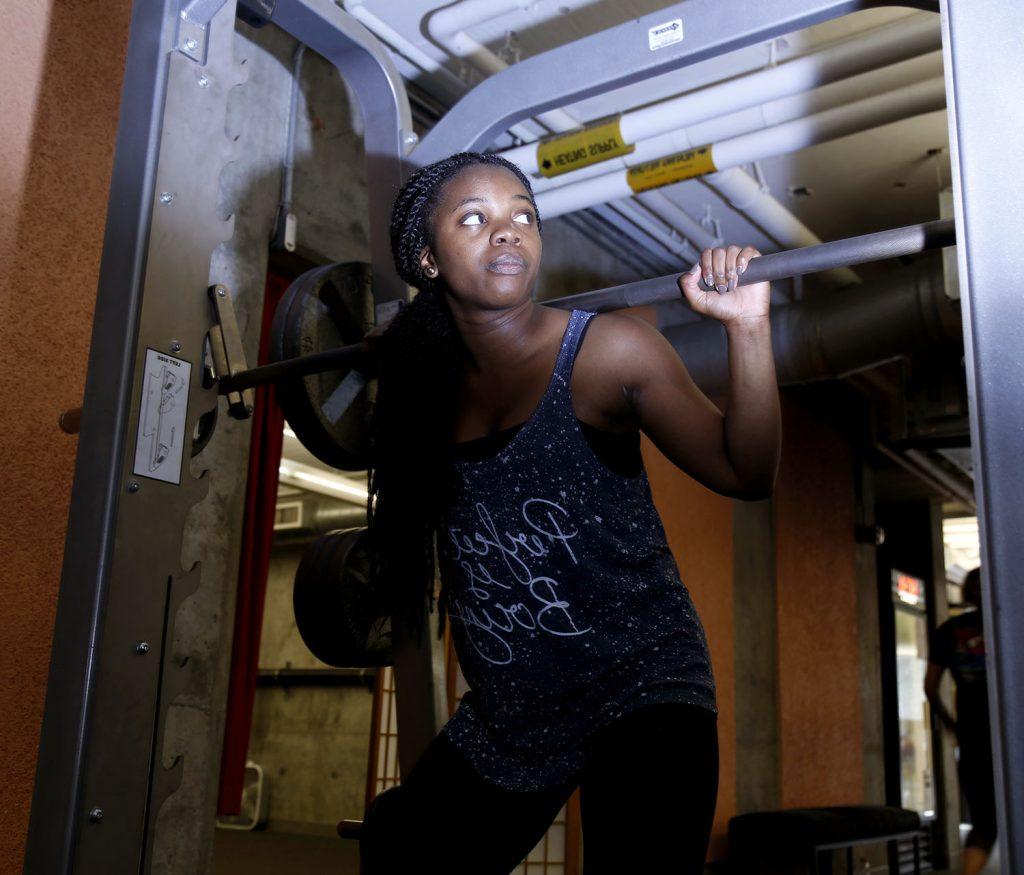 Small beads of sweat gather on the forehead of sophomore Uwaila Aigbovo as she works on her weighted squats. Even though she is uncomfortable, Aigbovo said she would rather bear the heat of restricting attire than the uncomfortable male gaze while working out at the gym.

“I don’t wear shorts at the gym,” Aigbovo said. “I wear capris because I don’t want people staring at my butt. I always feel like eyes are on me.”

Many SF State students who frequent the gym said they need to carefully plan their exercise attire and modify their workouts to avoid unwanted attention. Sophomore Cecelia Hetnick, 19, said she was working out in her hometown gym in Fremont when she experienced harassment that changed her forever.

“I was at my gym asking a trainer to help me with my back squats, because the barbell always hurts my shoulders,” Hetnick said. “The whole time he was helping, he was being super touchy and was staring at me during my whole workout. Later, he asked me for my number.”

Hetnick said she changed her workout attire to include longer pants and modest shirts to avoid receiving unwanted attention. She would never feel comfortable wearing shorts and a sports bra alone, unless it was for an all-women’s gym, she said.

The Village Fitness Center at SF State has drafted ways to keep students secure from harassment into its contract. Their policy states that members who exhibit harassment to other students lose their membership privileges.

According to Penacerrada, the fitness center has remained incident-free the last three years due to the strict policy and the younger demographic of clients, who he said tend to keep to themselves while working out.

SF State alumni Jeremy Dutra, 23, studied criminal justice and now is a personal trainer at the VFC. Last month Dutra won second place at the Paradise Cup in Hawaii. He said he deals with unwanted attention as a professional body builder.

“When I practice my posing for shows, a lot of guys at my gym in Fremont will stare,” Dutra said. “I am happy to explain anything as long as people ask. But there’s always that older guy that stares and doesn’t care that you see him.”

“I feel like the employees definitely have my back,” Cobb said. “Since I am a regular there they honestly make the gym feel like it’s my second home.”