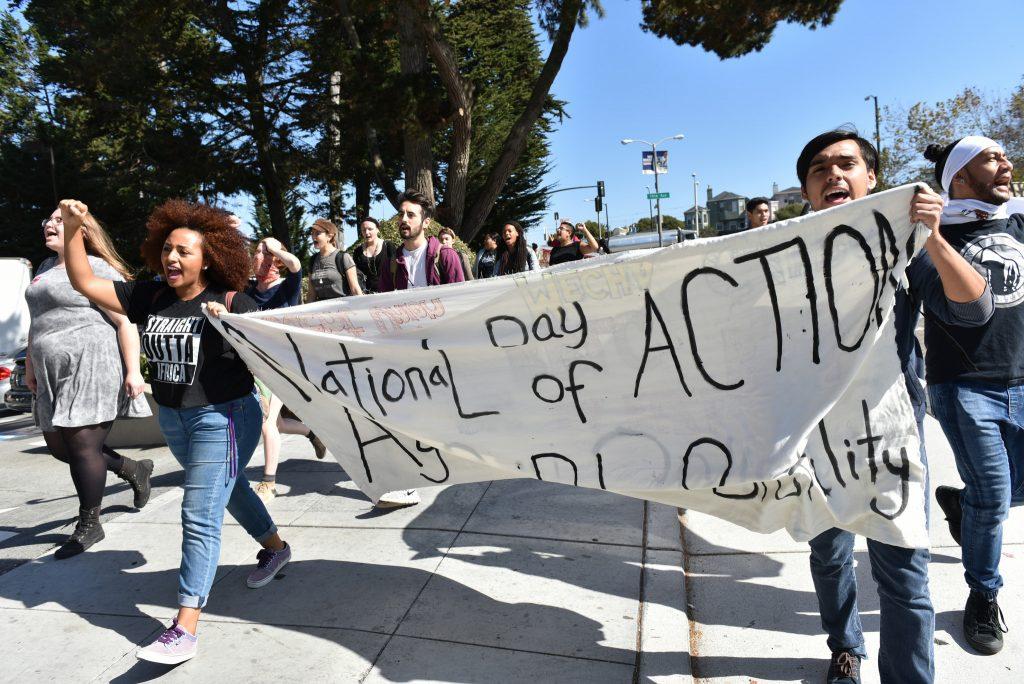 SF State historic organizations voiced their opposition to the California State University mandate that equipped all campus police with Tasers during the National Day of Action to Stop Police Brutality Thursday.

The CSU and the State University Police Association agreed to allow campus police to arm themselves with new equipment, including Tasers and pepper spray, Aug. 27.

“It is our duty to protect and love each other, and that is exactly what we are doing today,” Moore said.

The nation-wide event was established in 1996 to bring attention to police brutality, according to the Oct. 22 Coalition, a group of social activists, students, protest organizers and religious-based organizations who organize the annual protest in different cities. The coalition describes the event as an annual protest against subjugation and criminalization.

Organizers of the campus protest said they were against police brutality. Protesters included members from the BBLC, the League of Filipino Students, the Pacific Islanders Club, the Black Student Union, La Raza and the General Union of Palestine Students, who held up signs with phrases like “Students unite,” and “No tasers, no guns,” as they chanted the phrase “Black and brown lives matter.”

With megaphones in hand, more than 50 students students marched through the library to the front of the quad and did a call and response, shouting phrases like “No justice, no peace.”

Malissa Bilbrey, a communications sophomore and BSU member, said she chose to attend the rally to show the administration that students on campus have a voice.

“UPD should not be allowed to carry Tasers,” Bilbrey said. “It’s not only an unnecessary expense, but it is also an unnecessary weapon. Police brutality will continue to become more talked about in America, because the people who are mainly victims of police violence will no longer let their voice be marginalized.”

Members from the student organizations handed out a list of eight demands, which included prohibiting campus police from carrying Tasers, requiring additional training for campus police and increasing transparency into the decision to equip campus police with the electroshock weapon.

Africana studies professor Serie McDougal said he supports the National Day of Action to Stop Police Brutality and believes it has larger implications beyond police brutality.

“There needs to be a connection of police brutality to the larger issue of white supremacy and institutionalized racism,” McDougal said. “There needs to be more training into how to de-escalate a situation, rather than introducing more tools of violence. If you ask for peace without justice, then you are essentially asking oppressed people to be comfortable with inequality.”