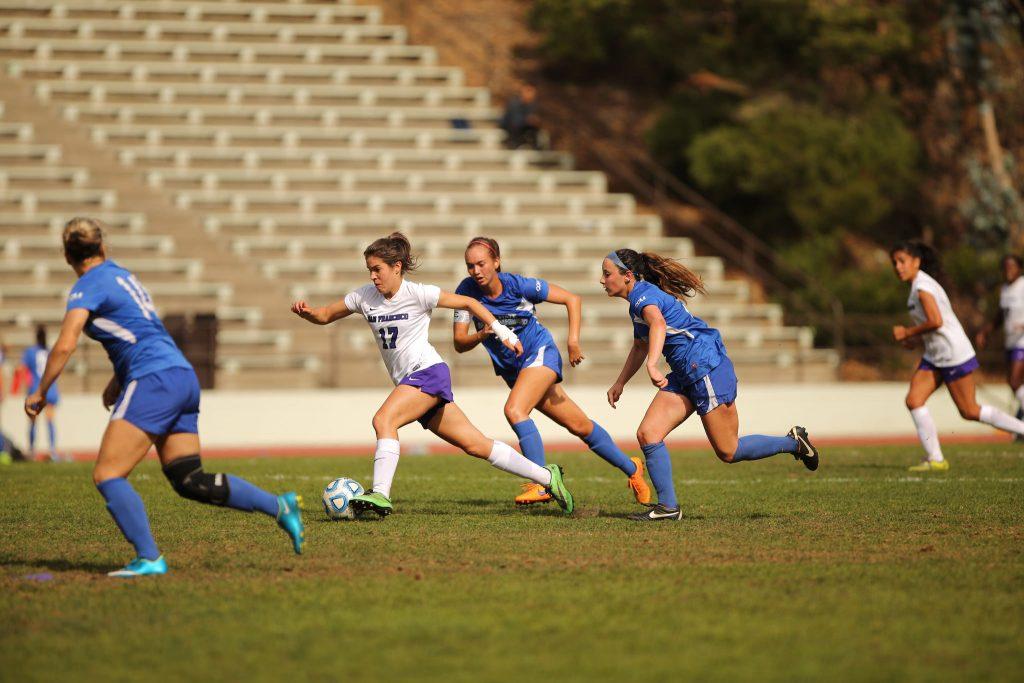 Thanks to arguably the goal of the season late in the game from Vanessa Penuna, the SF State women’s soccer team defeated Cal State San Bernardino on Friday by a score of 1-0

“It was awesome, one of the most beautiful goals of the season,” said defender Jada Williams. “Just perfect placement. When we saw it go in, we were all so ecstatic.”

One of the most exciting games at Cox Stadium this year got off to a entertaining start thanks to the pace and attacking from both teams that led to seven shots a piece in the first half. It was a faster start for the Gators than in past games.

“We just kinda kept building and creating chances and a lot of corners,” said head coach Tracy Hamm. “This was finally a game where I felt like we had more success.”

The second half the game slowed down as it looked like both teams began to feel the effects of the first half. CSUSB had the upper hand having more shots and corners, but would end up on the wrong side of the score board.

“We came out really slow in the second half,” Hamm said. “It looked a little different, but I’ll take a poor second half and a win any day.”

That winner would came late in the game thanks to a sheer stroke of brilliance from Penuna who was able to play a pass from Molly Schuster and connect on a shot from 20 yards out to place it perfectly into the top right corner.

“Molly was able to get the ball up and look at me,” Penuna said. “I was open so settled the ball, down looked up, saw the back post was open and just hit it.”

Finally gaining a lead, the Gators were able to play more relaxed and got back to playing the style of defense they had played at the start of the season. The shutout marks their third of the season and first since a scoreless tie on Sept. 18.

“I think we stepped up after the goal–it kind of woke us up,” Hamm said. “In the last 15 minutes we finally got back to how we’ve been playing the beginning of the season.

The win comes at the perfect time for the Gators snapping a three game losing streak and their first victory in six matches. With only one game left at home before the season finale at Chico State on Halloween, the Gators want to ride this feeling for their final home game.

“Our focus for the next game is going to be extremely high,” Penuna said. “It’s going to be senior night, so were all pumped and ready to go.”

The Gators hope to carry the momentum of this game for their home finale and senior night on Sunday against Cal Poly Pomona.