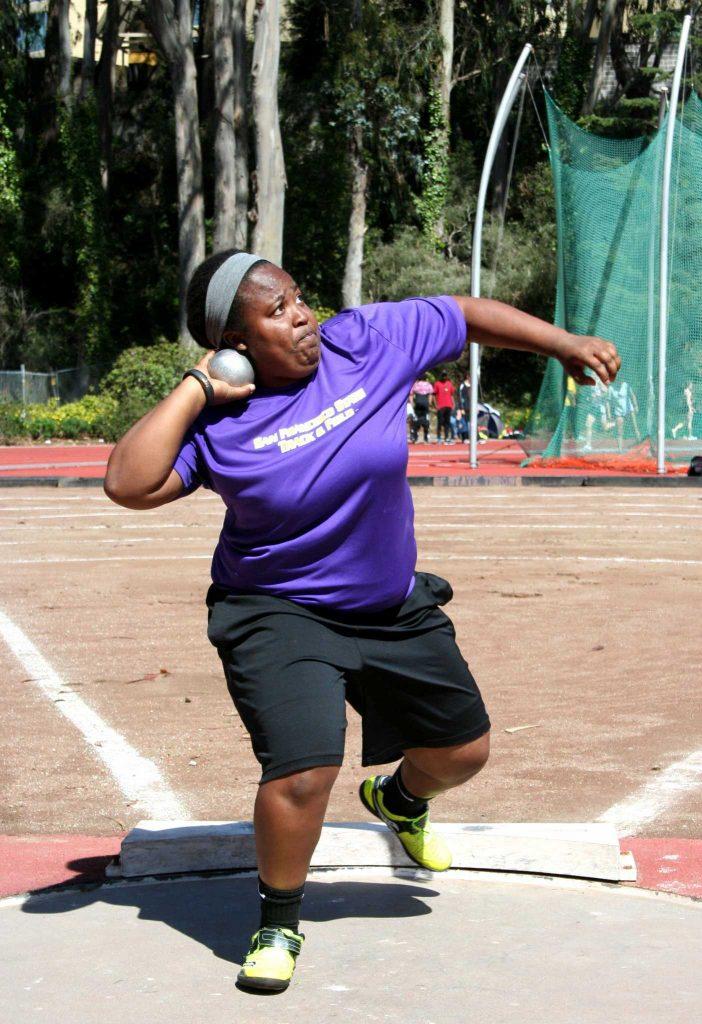 Ariana Luster, an SF State student and track and field athlete, died Wednesday, Oct. 21 after battling cancer. She was a member of the Gator's track and field team in 2013-2014. Luster prepares to throw a weight during a regular tack and field practice at the SF State track on Cox Stadium February 10, 2014. (Photo Courtesy of SF State Athletic Department)

Despite undergoing grueling chemotherapy treatments that made it difficult to breathe, SF State graduate student Ariana Luster made school and athletics her top priority until the very end.

“She came to every class while going through chemotherapy, no matter how bad she felt, because her education was that important to her,” said Marty Martinson, her professor for community health education theory last spring.

The cellular and molecular studies graduate student with a passion for track and field died Oct. 21 after a year-and-a-half-long battle with stage 4 neuroendocrine pancreatic cancer.

SF State was a big inspiration for Luster, who remained independent and passionate while living with her disease, according to Luster’s track and field coach Kendra Reimer.

“She was having a really hard time breathing, and just seeing her wake up and walk to class – she was truly an inspiration for so many girls,” Reimer said.

Luster was involved with the team, despite being unable to compete, by working as a manager, according to Reimer.

“If you were having a bad day, she was always the first one to come and cheer you up,” said Marina Tucker, a sophomore on Luster’s team. “She was one of the most positive people I ever met. Even on her worst days, she had her chin up.”

The track and field coaches said they saw a selfless nature in Luster. Luster demonstrated her love for her teammates, even offering her home to a freshman thrower who had no other place to stay.

“(Luster) went the extra mile to make it happen,” Reimer said. “Taking in someone that you don’t know that well, and through everything she was going through, to do that was a very cool thing for her throws group.”

Luster was enrolled at SF State as a student between 2010 and 2015, having received her bachelor’s degree in 2014, according to her professors.

“She was deeply committed to her education, and she came to class until her final days,” Martinson said.

While not in school, Reimer said that Luster was actively involved in extracurricular life. Outside of school, she was officer and vice president of A Step Against Heart Disease Organization, according to her LinkedIn profile. Luster also belonged to the Pre-Health Honors Society and the Black Student Union on campus.

Before her death, Luster had plans to remain involved with the SF State community and athletic programs, according to Reimer.

“She always talked about coming back to throw after her treatments,” Reimer said. “She came back to visit the campus in the fall, and it was really big for her to come see the team and come be around everyone. I felt like that was such a huge part of her life.”

Family and friends will commemorate Luster’s life Saturday, Oct. 31 at 10:30 a.m. in Inglewood.

Members of the SF State community said Luster made a lasting impact on campus.

“I clearly remember her story, and she will be greatly missed,” said Lisa Moore, Luster’s health education professor. “The one thing I will never forget about her was the strength she always showed and her smile.”