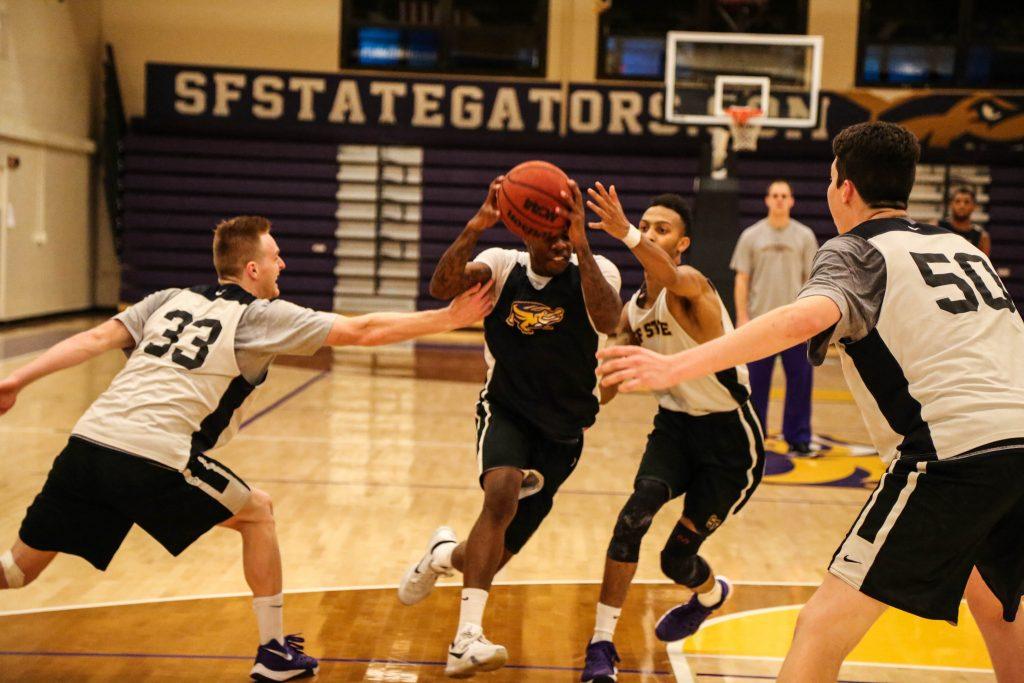 After a disappointing 11-15 record last year, the SF State men’s basketball team said it is determined to make a name for itself this season.

“I would like to hang a banner,” said head coach Paul Trevor.

Trevor said he has high hopes for this year’s team and is confident that it can make a statement.

“Our first goal is to win the (California College Athletic Association conference),” Trevor said. “It’s our goal no matter what. We set our bar high.”

The last few seasons didn’t go as planned for the Gators, according to returning forward Jon McMurry, but the team is hoping this year will be different. McMurry said a season without the CCAA championship would be a disappointment.

“We’re here to win and we want to win,” McMurry said. “Some people might be like, ‘We did well this year — we got fit — we won more game than we lost,’ but that’s not the situation for us.”

Trevor and McMurry both said their upcoming exhibition games against Division I teams would be a great assessment of their abilities.

“Playing Division I exhibition is exciting and a good test,” McMurry said. “We think we should play at that level, so it’s a nice little preparation.”

Trevor said the reason they were unsuccessful last season was their lack of anticipation.

“One thing we weren’t doing a good job on was making reads,” Trevor said. “We spend a lot of time playing two on two just to know where the read is, spacing, when you hit a gap where the open guy is, how to push and pull or how to dump the ball in the post and play off the post.”

Although two of last season’s captains didn’t return, the team added depth to its roster, including three all-state players, according to Trevor.

“Bynum is probably the best athlete we’ve ever had here,” Trevor said. “When you want to talk about highlight reels, you can throw a lob to him; it can be anywhere and he’ll catch it. He’ll make an immediate impact as a low post scorer for us.”

Jackson, a sophomore point guard and transfer from Cabrillo College, said he looks forward to competing with his new teammates and help guide the team.

“I’m looking forward to competing with them and adding my defense, being able to penetrate and get guys open because we have a lot of good shooters,” Jackson said. “Trying to add my game to their game and do whatever they need me to do.”

Rance, a freshman from Melbourne, Australia, is another player Trevor said he expects to have a big impact on the team.

“(Rance) is super skilled,” Trevor said. “He can handle the ball, shoot the threes, and he’s probably the most physical player we have.”

The deep roster this year makes it challenging for the coaching staffs to project who its starters will be, according to Trevor.

“It’s going to be very competitive among them for the minutes,” Trevor said. “Some guys play better with other guys, so we’re still trying to figure that out right now.”

The Gators will begin their season with three exhibition games against Division I opponents. The team will play their first regular season game at home versus Pacific Union College Nov. 14.