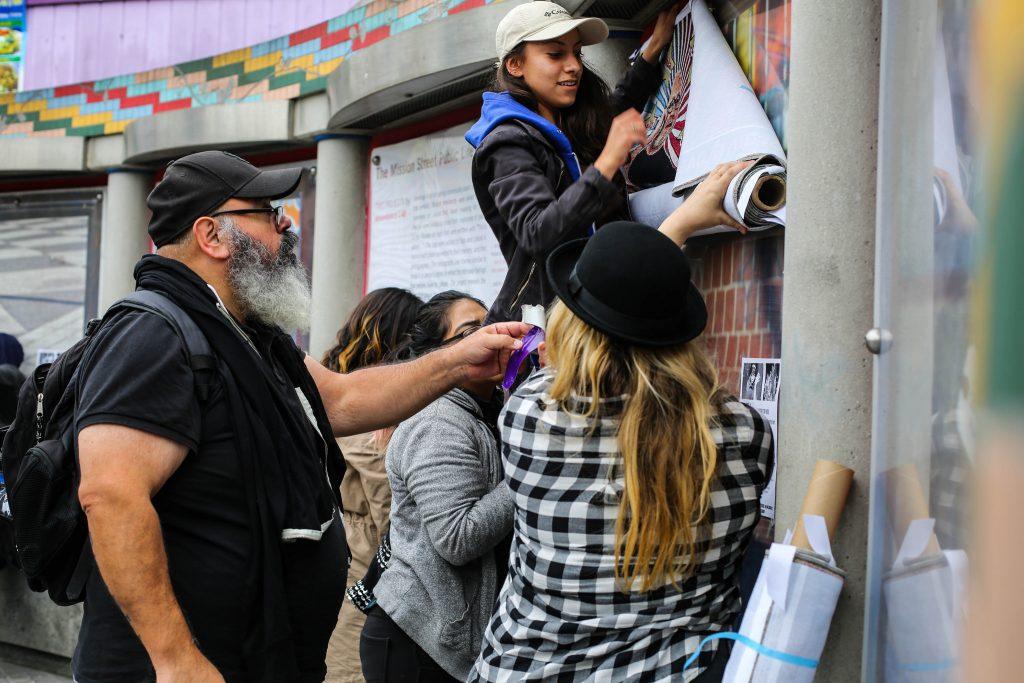 Bustling commuters escalated out of the underground BART station at 16th and Mission streets to come face to face with four intricately woven tapestries taped to the plaza’s walls. Some continued walking, while others paused, entranced by the artwork.

Victor De La Rosa, associate professor in the school of art at SF State, is the creator of the tapestries for his collection “La Gente De Tu Barrio/The People of Your Neighborhood.”  He is taking a stance against what he said was BART’s recent censorship of his art.

It started when he entered a competition held by San Francisco Planning’s Mission Street Public Life Plan and was selected to create four woven portraits to be featured at the BART station, De La Rosa said. The series of posters depicts four people from the Mission District standing next to words and phrases that range from positive feelings about the Mission to more controversial topics like gentrification. De La Rosa’s final piece featured Mission local Mickey Martinez, who stands next to a large star saying, “Bitch you’re not from here!”

De La Rosa put his collection up for commuters to see Oct. 27 from 5 to 6 p.m. at the BART station after a nearly two-month delay of his work being displayed because of BART’s hesitance to allow his fourth tapestry be shown, he said.

“If BART is going to make sure that every project is 100 percent OK with them in terms of safety of the message or the ability of their riders to not be upset by the message, then that’s just going to leave hearts and flowers, because the Bay Area is not like that,” De La Rosa said. “We have a tradition of looking at tough subjects and discussing them out loud and in public.”

Five other artists were chosen, and all of their projects are either under way or on display, according to De La Rosa. He said that San Francisco Planning Department had already obtained the permit for the location to display his pieces. When BART, which owns the space, saw the artwork, the last poster in particular, it put his installation on hold.

De La Rosa said that San Francisco Planning Department had been trying to work with BART to find a solution. He said he waited almost a month for BART to respond to San Francisco Planning Department’s proposal that they blur out the word “bitch” on the fourth poster. However, De La Rosa said after weeks of delay, BART ultimately decided Oct. 22 that only the first three pieces could be put up, or none at all, because of the conflict.

“If I left out that one piece, that would only be 75 percent of my message,” De La Rosa said. “That’s not the full dialogue; that’s not the full art conversation happening in the Mission, and I didn’t want it to look like a one-sided, almost approval on my part, because that’s not what I proposed.”

Jim Allison, BART media relations manager, said that BART worked to find a solution that was acceptable to De La Rosa, BART and the city.

“Because BART’s art policy had not been finalized, BART used existing advertising standards in the permit approval process for the art installation,” Allison said.

He said that the phrase on the last poster was profane, which standards prohibit.

“Blurring out the word ‘bitch’ would not address the overall demeaning tone of the message in that panel,” Allison said. “BART did issue a permit for the installation of the other panels. Those panels could be installed if the artist wishes.”

Martinez, who said she has lived in the same apartment her whole life, said that she’s seen the Mission transform from families to techies.

“I told Vic BART will never put up this piece of me, and they’re too afraid and don’t want to offend the white people that have moved to Mission,” Martinez said.  “It is important because old school people from the Missions should know that they’re not the only ones thinking ‘what happened to my home, what happened to my neighborhood, why do I feel like an outsider now?’  That is scary true.”

Jessica Sabogal, one of the other artists chosen to have her work showcased on Muni buses, said that she didn’t receive any restrictions. She said that public art is always a negotiation between what the artist wants and what the city thinks is appropriate.

“The censoring of Victor is a disservice to all the people that need to hear the message of so many of us that rarely get a platform to speak,” Sabogal said.

Paul Gibbons, who has lived in the Mission since 2009, was another one of the subjects featured in the tapestries, and has known De La Rosa for more than 20 years. Gibbons said that with the election nearing, the collection illustrates a controversial topic.

“It’s ridiculous. I think its censorship,” Gibbons said. “I think discussing these issues is essential. This is the type of art we need to be having in the city to facilitate this type of discussion.”