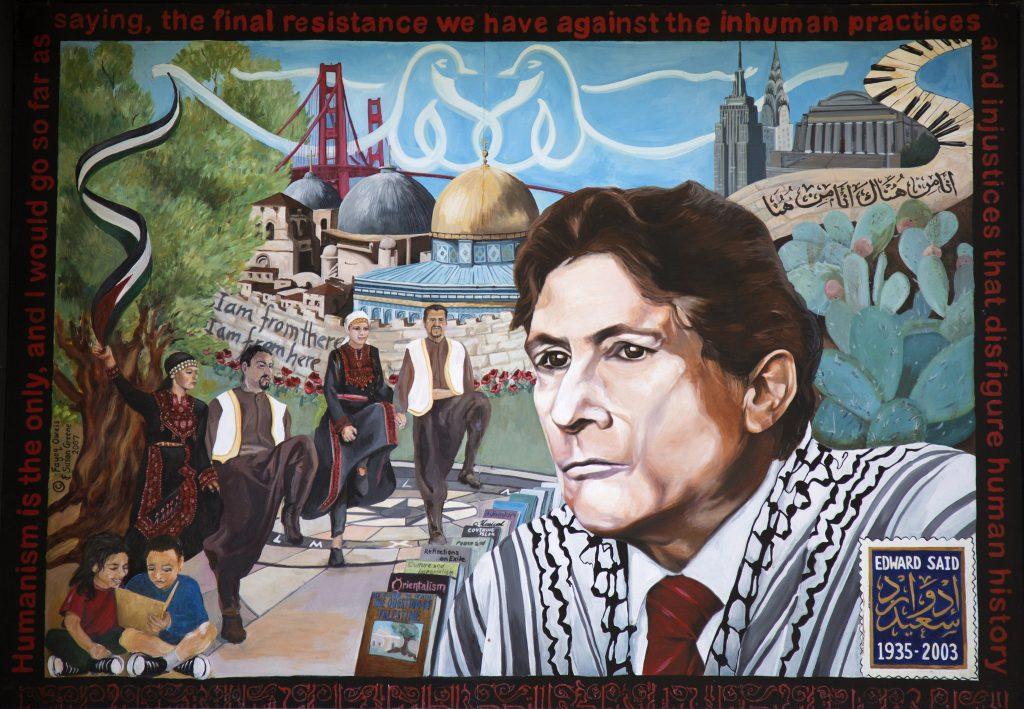 “Edward Said is a genius, essentially,” said GUPS general member Lubna Morrar. “I view him on the same level as Martin Luther King Jr., Malcolm X and Angela Davis, as a person who was fighting for Palestinian people.”

The eighth-annual Edward Said Mural Celebration, co-sponsored by SF State’s Arab and Muslim Ethnicities and Diasporas Studies and the Richard Oakes Multicultural Center, was held at noon in the Malcolm X Plaza and continued with a ceremonial banquet in Jack Adams Hall at 6 p.m.

The mural has been the center of controversy and criticism since its inception, with some arguing that it promotes anti-Semitism, according to a 2013 story from the Golden Gate Xpress.

After a yearlong debate, the mural was unveiled in 2007 to honor Said’s impact on the Palestinian community and homeland, according to Xpress.

Said, who died in 2003, was born in Palestine and moved to the U.S. in 1951, according to the Encyclopaedia Britannica. He became a professor at Columbia University in 1963 and published multiple books criticizing Western cultural misconceptions regarding the Middle East. His well-known book “Orientalism,” published in 1978, examines the issues of modern imperialism and analyzes the Western study influencing cultural errors that misrepresent the Eastern world, according to the Colonial and Postcolonial Literary Dialogues website.

“(Said) was a poet, an artist and eloquent in his being,” Morrar said. “He gave a sense of pride to the Arab nation and Palestine people. It’s important to honor and celebrate him and to know it’s not just a mural for art, but a mural for the road of liberation.”

The celebration opened with GUPS welcoming SF State’s Student Kouncil of Intertribal Nations member, Metzali Andrade, 21, to the stage as she gave their “blessing of the land and space.”

Morrar said GUPS recognizes that the University is sitting on stolen indigenous land; they allowed members from S.K.I.N.S to come and bless the space during the ceremony. She said they recognize that the universal struggles faced by both Palestinian and indigenous people are interconnected.

GUPS provided dinner for everyone in attendance as Morrar spoke briefly about her personal experience and the importance of resistance and standing in solidarity.

Attendees were treated to a special performance by Said’s daughter Najla Said, who performed her one-woman play “Palestine” in honor of her father’s mural and the Palestinian community. Najla Said is the author of the memoir “Looking for Palestine: Growing up Confused in an Arab-American Family,” which discusses the challenges she faced finding her own Arab identity in America.

SF State professor of both ethnic studies and race and resistance studies Rabab Abdulhadi spoke about the history of the Palestinian community and expressed the importance of learning the Arab and Muslim Ethnicities and Diasporas Studies, while introducing Najla Said.

“Najla Said represents the power of culture and what we stand for in AMED (Arab and Muslim Ethnicities and Diasporas Studies),” Abdulhadi said. “She is representing everything we are educating and speaking about, the place of culture in people’s struggle.”

Emotions were high as Najla Said described her time in Gaza and her experience during and after Sept. 11. The audience stood and applauded as she teared up near the end of her performance and the celebration came to a close.

“A good portion of my childhood was spent avoiding the fact that I might be Arabic,” Said said. “Since, I have felt my love for the Arab culture grow. Although I have never returned to Palestine, Palestine returns to me.”