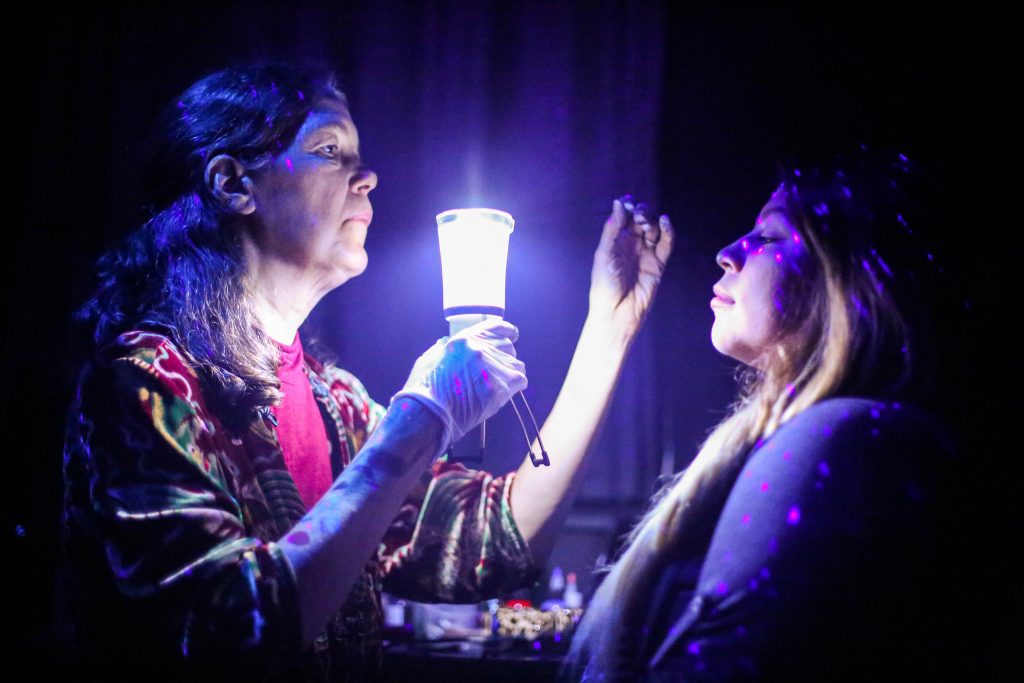 The top 90’s hits bumped through a dimly lit bar as a face painter skillfully traced over student’s faces. The Day-of-the-Dead-themed All Hands fundraiser dedicated the event to victims of Hurricane Katrina that devastated the Gulf Coast.

Loretta Lowe has been a lecturer at SF State teaching event management for the last 17 years. She regularly volunteers for All Hands, which is a non-profit relief organization specializing in rebuilding homes destroyed by natural disasters. All Hands hosts events at local bars twice a year to spread awareness of their charity and to raise funds toward their cause.

“I wanted to do something to help but didn’t have the money to donate to Red Cross,” Lowe said. “However, I had time to volunteer.”

Lowe has her passport full of stamps after traveling as far as Peru and Japan to help rebuild homes. She said she volunteers every two years to do her part helping communities that have been destroyed by nature.

“For me there’s an emotional impact,” Lowe said. “I remember how it felt to be in a natural disaster with the earthquake of 1989 in San Francisco and the post traumatic stress. It’s not just the disaster or rebuilding homes that need fixing– it’s the healing connections with people. I would talk to homeowners from Hurricane Katrina and they would tell me stories of people clinging to trees or people watching water rise from the top of their roof.”

SF State parks and recreation major Jeffrey Masubuchi helped to coordinate the event. The 21-year-old said he was devastated after the tsunami and earthquake that struck Japan in 2011.

“I was so worried about my family over there and it was a huge relief to hear that they were okay,” Masubuchi said. “Many people have been victimized by something they can’t control so it’s up to us to help them out.”

Another student directly impacted by natural disasters was Madai Carreno. Carreno said many of her family members in El Salvador were affected by the earthquakes that have struck the area.

“I come from a country with a lot of earthquakes, and 12 years ago there was a big one in El Salvador,” Carreno said. “It was a 7.6 earthquake and there were a lot of landslides. Five hundred people died and I knew many of these people from school. The city is still in ruins, but I would definitely go back to help rebuild it. This fundraiser means a lot to me.”

Lowe said she encouraged her class to help volunteer any way that they could. She has also sponsored students who couldn’t afford the flight to devastated countries and said she has high hopes for the charity.