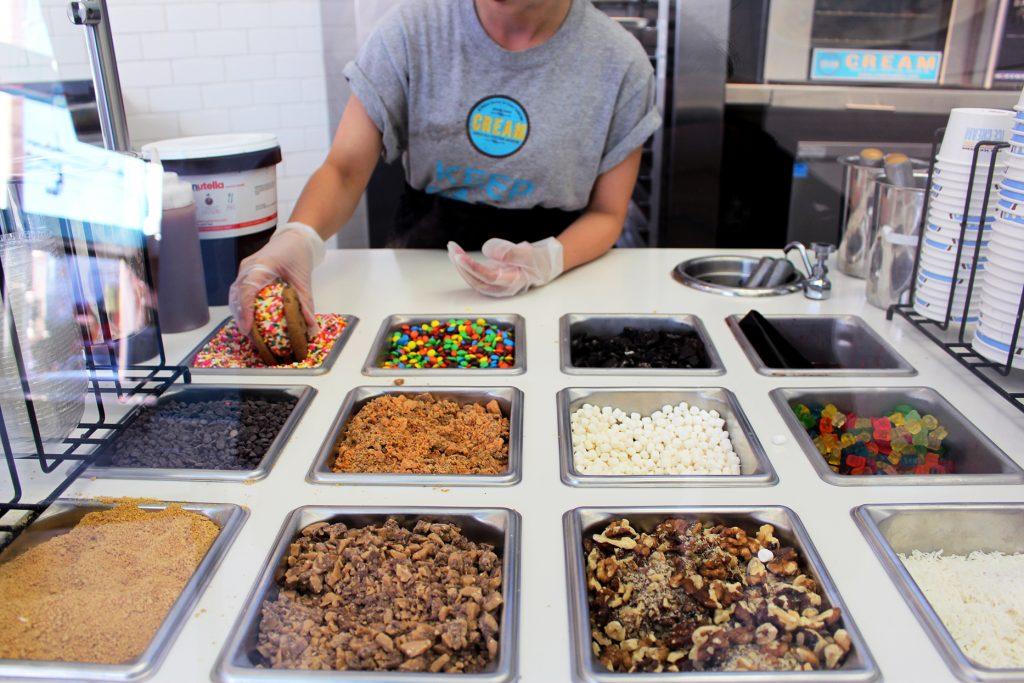 A CREAM employee makes an ice-cream sandwich for a customer Thursday, Oct 29 on 16th Street in San Francisco. CREAM will be opening a new shop at Stonestown Galleria shopping center. (James Chan / Xpress)

CREAM’s make-it-yourself model makes it possible to assemble hundreds of ice cream and cookie combinations to satisfy any sweet tooth. With a kiosk soon to open in the center of Stonestown Galleria, the dessert franchise will join the ranks of Stonestown’s many fast food restaurants that allow customers to personalize their meal.

“I myself am a huge fan of Chipotle, and I think it’s great that you can customize your items,” said Alexis Garcia, CREAM store owner. “It makes it easier, because you are going to get exactly what you want and exactly what you paid for.”

The steps are simple: choose a cookie, flavor of ice cream and optional toppings. According to Garcia, CREAM, which stands for Cookies Rule Everything Around Me, has cultivated their brand to branch out from ice cream scoops on a cone

Associate professor of hospitality and tourism Bo Ferns said fast-food chains opt for an interactive relationship with consumers to engage them in customized mass production. The make-it-yourself model involves less labor to put out the product than a sit-down restaurant as well as less training for the front-line workers.

“It allows consumers to engage in the production process,” Ferns said. “Our overall culture, and especially this generation of consumers, are looking for an experience, uniqueness and ability to personalize a product that’s just for them.”

Garcia, who first opened the CREAM in the Mission District in August 2014, said the franchise made the decision to open a store in Stonestown Galleria about a year ago because of the mall’s constant foot traffic and the prime location the mall gave her. The shop will be centered right in between the two escalators in front of the main entrance and is the first business to occupy the location, according to Garcia. Garcia said she plans to open Nov. 21, but may be delayed to Dec. 5 depending on approval from contractors and health inspectors. She also said this CREAM will be the first one ever located in a mall as a kiosk.

“I think having it at a mall, a block away from a university, is good for our brand and for people to actually experience what we have to offer,” Garcia said. “Nutrition-wise for us, you have the option to get toppings or no toppings, more sugar or less sugar. In addition to that, we have gluten-free options and vegan options, so we do cater to most people.”

Rochelle Anicete, a fourth-year microbiology major at SF State, has worked as a crewmember at the Chipotle in Stonestown Galleria for over a year. She said after she got hired, she started to notice different food joints of the “make-it-yourself style” popping up, such as Blaze Pizza and Built Custom Burgers. She said that although customer-service wise, it can get hectic, the trending personable way to order food is more valuable than traditional food services.

“When people are in line, you get to actually interact, whereas, with McDonald’s, it’s just robotic in handing over the food,” Anicete said. “I just want customers to know that just because we’re wearing a hat doesn’t mean we’re different. We’re the same people, just trying to make money.”

Jaime Anderson, an independent marketing contractor for the Stonestown CREAM, said that previous CREAM openings have been extremely busy. She said their crew expects nothing less than pandemonium for this grand opening.

For each of the franchise’s openings, CREAM has offered free ice cream sandwiches to the first 3,500 patrons. The promo has drawn huge crowds of people who’ve waited in line for up to three hours, according to Anderson. She said they won’t be doing the same elaborate grand opening for the Stonestown franchise.

“Sometimes, people like knowing what’s going into their food, and they feel like they know better if they are choosing the toppings and ingredients,” Anderson said. “CREAM isn’t your typical Baskin Robbins and instead allows you to be your own chef, and their combinations are endless.”