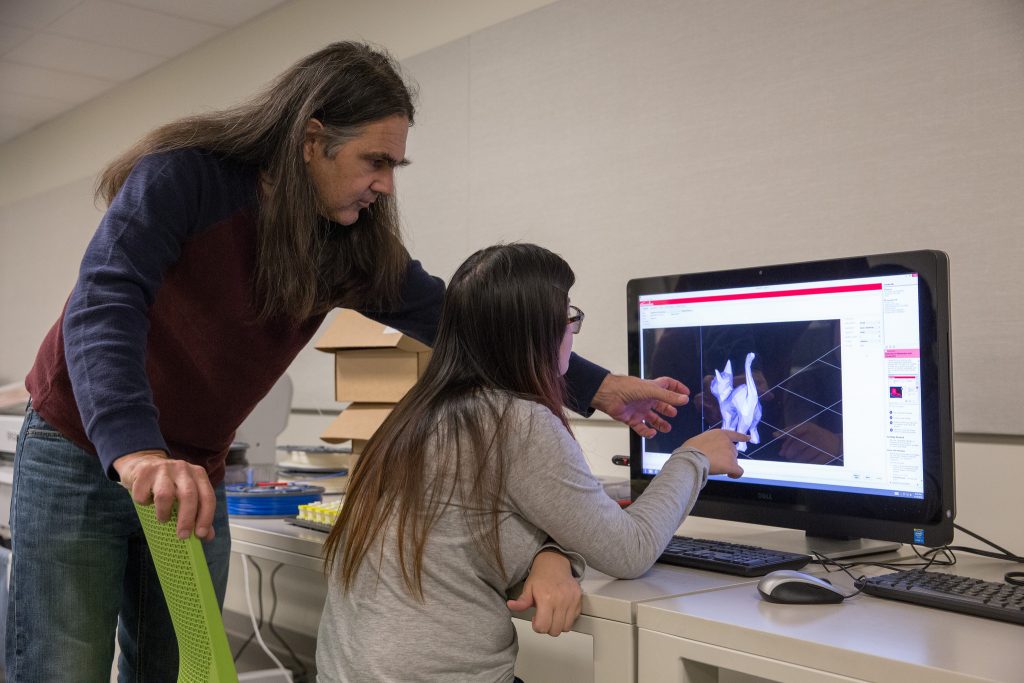 A 3-D printer, scanners and modeling equipment are just a few of the new tools students can find at MakerSpace, a digital media studio, designed to encourage student collaboration, that opened in the J. Paul Leonard Library Nov. 6.

MakerSpace is an environment aimed toward facilitating design projects for students by providing space for teamwork and necessary equipment, according to information technology consultant Chris Novak, who helped set up the new space. In addition to the 3-D equipment, tools provided at MakerSpace include poster printers, video production equipment, art materials and tools for working on electronics, Novak said.

“People can come in and brainstorm,” Novak said. “They can check out tools, caliper rulers, video equipment and (use the) 3-D scanner. As long as they’re a student currently enrolled (at SF State) and don’t owe the library too many fees, they can use the lab and the equipment.”

Richard Ortiz, the instructional support technician at SF State’s department of design and industry, said six 3-D printers have been available to the department for the past few years.

“(For students in the department, 3-D printing) has become second nature,” Richard Ortiz said. “It’s how we do things here. Students can make everything from cases that house electrical equipment to full models of objects. It allows students to see how (their designs) are going to feel in their hands.”

While other departments on campus have had the same technology for a couple years, the creation of the new MakerSpace in Room 260 of the library aims to make the equipment available to all students, according to Novak.

“By making (the equipment) universally accessible through the library it opens it up for everybody,” Novak said. “It opens up the chance of someone who never thought they would work with 3-D software say, ‘Wow, this is available to me,’ or, ‘I can make this work for my discipline.’ It opens it up so it is not just for designers or engineers – it is cross-disciplinary.”

Library staff is available to help students learn how to use the 3-D design software and acquire the necessary skills for 3-D printing, according to Novak. Students not interested in learning how to use the software can still utilize the services offered by the MakerSpace, Novak said.

“We get engineering students, (but also) people who just want to print an iPhone case with a design on it. It varies,” Novak said. “Sometimes someone comes in and wants to print something, but doesn’t want to spend time to learn the software. You can search online for a design, and we’ll print it for you.”

Access to the MakerSpace is free, but students must pay for the materials needed for 3-D printing, which at the moment is about $7 per cubic inch, according to Novak. The 3-D printer uses spools of plastic similar to what’s used for LEGOs, according to Novak, who said that the user creates a design that is programed into the printer, which then layers plastic to create shapes.

Alex Ortiz, a computer engineering major said he used the equipment at MakerSpace to complete a personal project. He just finished a prototype of CubeSat, which is a nano satellite that will be used for environmental imaging for climate research. Ortiz said prototypes are an important stage in the design process.

“It’s most useful for prototyping,” Ortiz said. “You can print something really quick, and it can tell if you need to make any changes later.”

“We 3-D printed a prototype within a week,” Alex Ortiz, a computer engineering major said. “(It) would have taken months without a -3D printer to prototype our design.”

“From my experience, it’s actually pretty cheap,” Ortiz said. “For printing, it’s around $7 per cubic inch. (I) only spent $28 dollars (for the prototype), which is three times cheaper than sending it to a manufacturer. It’s going to be cheaper once they get another (printer) up and running. The other printer is going to be $4 per cubic inch.”

Ortiz said that MakerSpace can be used by anyone.

“You can prototype any design you want,” Ortiz said. “It is good for non-technical people – people in a non-technical field like art or English that want to 3-D print a sculpture. I would say the MakerSpace is a good idea. We didn’t really have this up until this year.”

Students interested in using the software and equipment at MakerSpace do not need to have any prior training or knowledge, according to Novak.

“What we’re hoping to facilitate in the library is to have people come in say, ‘I have an idea and heard about 3-D printing, but don’t know where to start,’” Novak said. “We encourage people to come in with a project and learn. I have seen a lot of people come in that are interested, but don’t know how to do anything.”