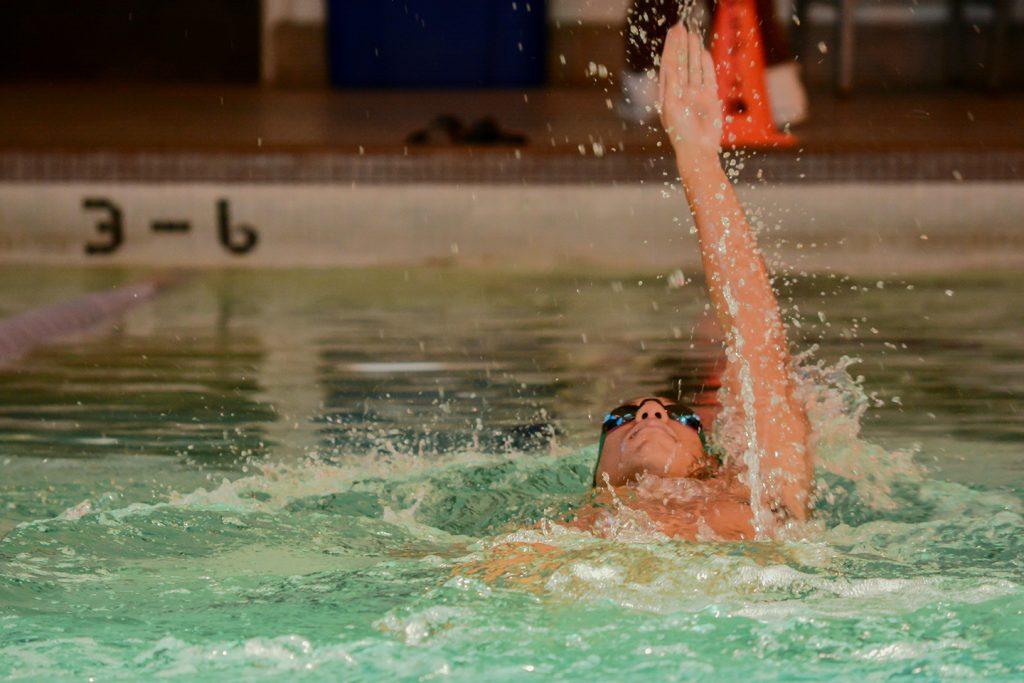 Dedrick Boyington, business marketing major and president of the SF State swim club, does a back stroke in the pool at the gymnasium Friday, Nov. 6, 2015. (Aaron Levy-Wolins / Special to Xpress)

Hidden in the back of the Gymnasium is a swimming facility, where SF State swimmers dive into the water and complete laps, hoping for a new swim club in the upcoming spring semester.

Dedrick Boyington, a junior at SF State, said progress is being made and the swim club is almost official.

“I’ve been working with the sports club managers, filling out the required paperwork to become officially established,” Boyington said. “We aren’t there yet, but we are making great progress.”

Boyington is the main organizer of the club and has been dedicated to turning it into a reality. He came up with the idea of starting a swim club since the beginning of the year and said he has been working meticulously to establish it.

If the swim club is established, Boyington will become the president of the club. He has already assembled five individuals who are committed to being part of the club’s leadership team and said he has has more than 50 interested club members.

“To start the swim club, we had to establish five positions – a club president, vice president, treasurer, safety officer and advisor,” Boyington said.

All of the progress might not have been possible if it wasn’t for the support of Aquatics Student Manager Malia James and Aquatics and Safety Programs Coordinator Ben Forchini, Boyington said.

“Dedrick (talked to) me about starting a swim club, and I was like, ‘Let’s go. I’ll help you out – let’s do it,’” James said. “This semester, we’ve been working on collecting names, putting in the paperwork, finding the officers and getting everything done, so I’ve just been really helping him facilitate the process.”

James said he believes having a swim club would be very beneficial for students.

“I just really want students to have a team to come out and swim with,” James said. “It’s not just an individual sport, but it’s such a good team sport as well, so it would just be really awesome to have a swim community on campus.”

“I was petitioning at the theatre department – I was telling the drama club that we should get the word out there, and I know a lot of theatre students who’d like to join too,” Moody said. “I think a really good way is to get some marketing going – get some posters or maybe shoot a short commercial.”

Boyington, James and Moody all said they agreed that having a swim club would encourage more students to consider attending SF State.

“It would be nice to have a competitive team too,” Moody said. “There’s teams like basketball, wrestling and soccer, but we don’t have a swim team, and I know a lot of my friends check out SF State and say ‘Well, there’s not a swim team, so I might just go somewhere else.’”

Boyington also said he believes the swim club will help foster a sense of community at SF State.

“I want people to have fun and see them proud of being a swimming Gator,” he said. “We’re creating a community on campus through the swim club for making new friends and improving our swimming techniques.”

Boyington added that by getting involved, club members will have the chance to do fundraising, public relations, organization, administration, fiscal management and program scheduling.

“I would love to leave a footprint on the San Francisco State campus and create a club that has a positive impact on student life,” Boyington said.