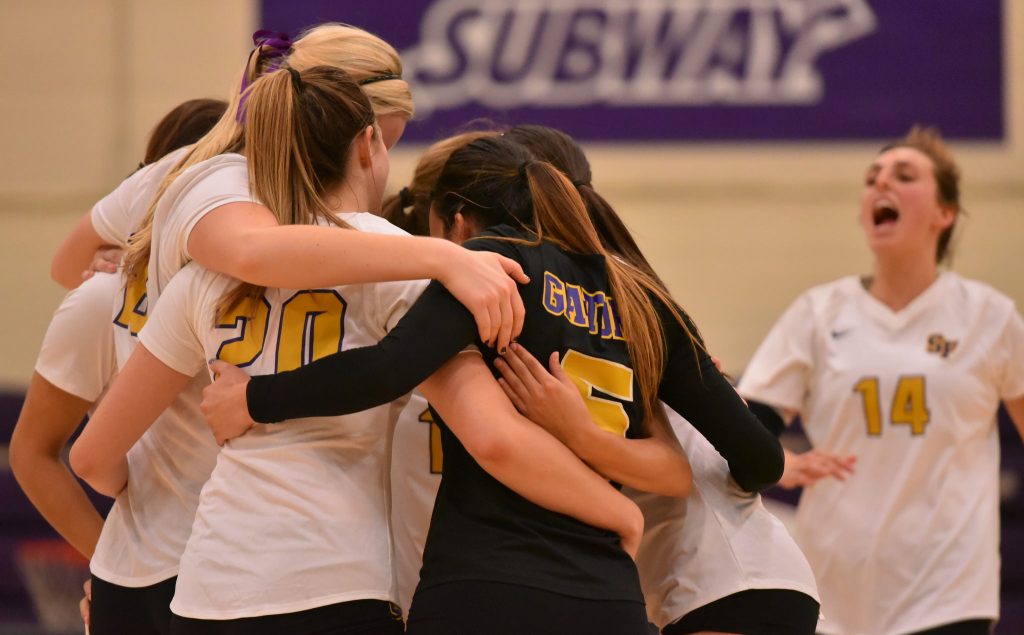 SF State Gators celebrate at the end of the last home game of the season against Cal State San Marcos Cougars at the Swamp Friday, Nov. 13, 2015. (Qing Huang / Xpress)

With bouquets in hand and tears streaming down their faces, three graduating seniors on SF State’s volleyball team took to the Swamp Gymnasium for their final home game last week.

“I was very emotional – I didn’t really know what my feelings were going to be going into this game,” said Clark, one of SF State’s three team captains. “Tonight was just really exciting, and when I walked out it was all tears, but it was tears of joy.”

Nicerio and Clark posted impressive stats, tallying 22 digs and 18 kills between them. The win added to the Gators’ momentum, as they now carry a streak of nine straight set wins over three games, heading into their first round playoff match up against the California State Polytechnic University, Pomona Broncos in San Diego Thursday.

“A lot of our goals this year were to communicate well as a team,” Clark said. “We work on that everyday, and I think it shows when we play.”

For fifth-year senior Nicerio, SF State’s all-time leader in career digs, the season’s final game served as a reminder that her 15-year love affair with volleyball will soon come to an end.

“I’ve been playing volleyball since I was in third grade, and it’s crazy that I’m going to be done now,” Nicerio said. “I don’t think it’s hit me yet, since we have playoffs, but I’ve been here for five years, and it’s going to be different not playing next season.”

Kim Mansfield, Nicerio’s mother, said it was surreal to see her daughter play in one of the last games of her volleyball career.

“I’m so sad that it’s ending, but I’m just so happy for them for all the things they’ve accomplished,” Mansfield said. “It’s been great to see Jessica develop as both a player and teammate and as a leader.”

Head coach Jill Muhe said what stood out to her the most about the players’ final home performance was the team’s all-around solid play and the contributions from a wide range of players.

“It’s really difficult to beat a quality opponent in three, so I’m really glad we were able to do that,” Muhe said. “It was really nice to send our seniors out on a win. We’re going to miss them, and I know they’re going to be fantastic in whatever they choose to do.”