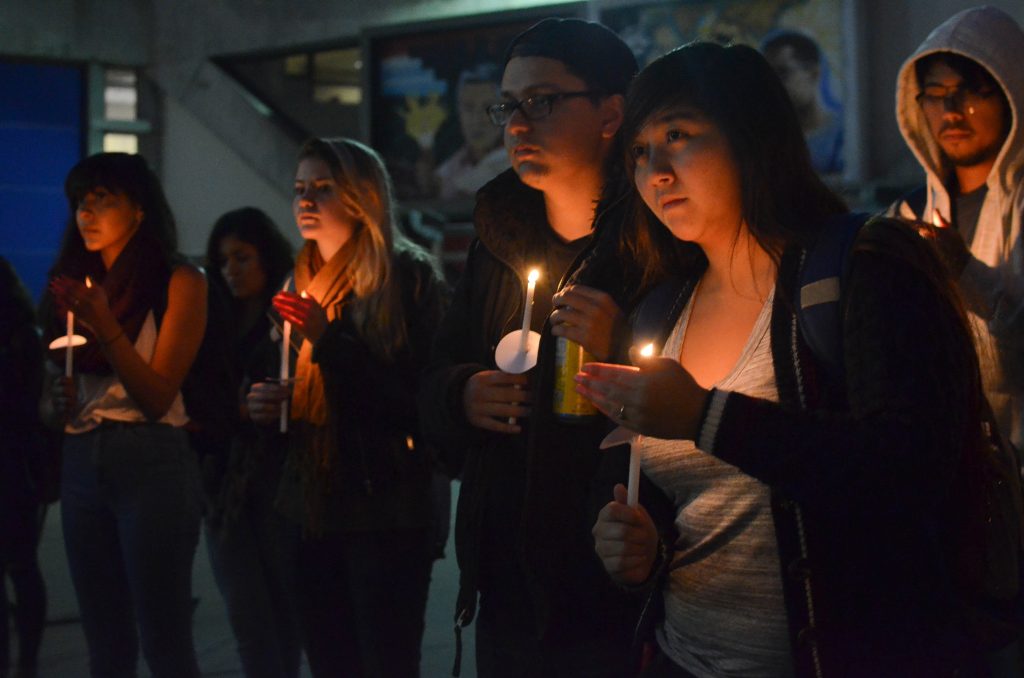 Students gather for the SF State Vigil Against Violence in Malcolm X Plaza Tuesday, Nov. 17, 2015. The vigil is in honor of death of Cal State Long Beach student Nohemi Gonzalez and many others during the attacks in Paris Friday, Nov. 13, 2015. (Melissa Minton / Xpress)

SF State senior Kareezia Younger said she was in her home, 20 minutes away from the Bataclan concert hall in Paris, when she received an alarmed phone call from her mother Friday evening.

What Younger didn’t know was that Paris was besiege by the deadliest terror attack France has ever seen.

“I was trying not be overly emotional, but when I saw how many people lost their lives, I cried,” Younger said. “Knowing it’s so close to me and happening now.”

The Nov. 13 attacks on Paris, carried out by seven militants, killed at least 129 people and injured 352 over the course of only 30 minutes, according to a report from The Guardian. Attackers launched a coordinated series of shootings and explosions at six different locations across the French capital, the report states.

While countries around the world mourned the victims, SF State held a Vigil Against Violence Tuesday for the 129 people killed in Paris, including California State University, Long Beach student Nohemi Gonzalez.

President Leslie E. Wong sent out an email to the SF State community Monday to acknowledge the attacks and account for the safety of the 35 SF State students currently in France.

“It will be a time when we can come together as one community and celebrate the values we share, in direct opposition to those of the perpetrators of these attacks: tolerance, understanding and peace,” Wong said in an email before the event.

Younger, who is currently studying business marketing in Paris, said she and her roommate locked the doors and windows and decided to stay in for the weekend as they watched the horrific attacks unfold. That night, ambulances and helicopters could be heard for about two hours, she said.

“Panic started to settle in while (I was) watching the live updates,” Younger said.

The next day there was complete silence and the streets were empty, Younger said.

In response to the attacks, French President Francois Hollande declared a war on terror, according to the Wall Street Journal. President Barack Obama issued a statement the day of the attacks that offered America’s services and pledged solidarity to France, which he called the country’s oldest ally.

The vigil took place outside the Cesar Chavez Student Center, where candles were handed out to attendees. Mary Ann Begley, the Dean of Students, spoke about the tragedy before asking for a moment of silence. She then opened up the stage and invited attendees to share their thoughts.

Joseph Miesch, a marketing major, said he felt that the message “Pray for Paris” is counterproductive because he believes that the attack was religiously motivated.

“I feel so many times people are showing their support by saying ‘Pray for Paris,’ and that’s the wrong thing to do, because this was done by religious extremists, but it was religion that caused it,” Miesch said. “(The religious extremists) want to create rifts between the people in our country.”

Sebastien Goigoux, a French exchange student and international business major currently studying at SF State, said he attended the vigil to honor those who died in the attacks. He is concerned about his family and friends in Paris, he said.

“I was upset that I couldn’t be there, and I felt like I was on the other side of the world and unable to be there to support my family and friends,” Goigoux said. “(The French) just all want to show to those people who did these attacks that we’re still not afraid and we’re still going to live our lives.”

The Office of International Programs contacted French exchange students at SF State to make sure they were okay and to ensure their family members in France were safe, according to Begley.

Students taking part in the CSU International Program are eligible for emergency medical services and security evacuation services in times of danger, such as natural disasters, kidnappings or political conflict, according to the CSU.

Although the attacks have sparked questions regarding the safety of international travel, SF State currently does not have plans to change their study abroad policies, according to SF State Director of International Programs Hildy Heath.

“Right now I think it’s too early to make a new policy – the incident is still very new and premature – but we do know all of our students are safe and accounted for,” Heath said.

In spite of the tragedy, Marion Abonnenc, an international relations major whose home is five minutes away from the site of one of the attacks, said that the message of solidarity and unity could not be shared enough.

“The main thing is to not be afraid,” Abonnenc said. “The Charlie Hebdo slogan was ‘We are not afraid,’ because that’s exactly what they want. We want unity and solidarity and love now and not violence.”