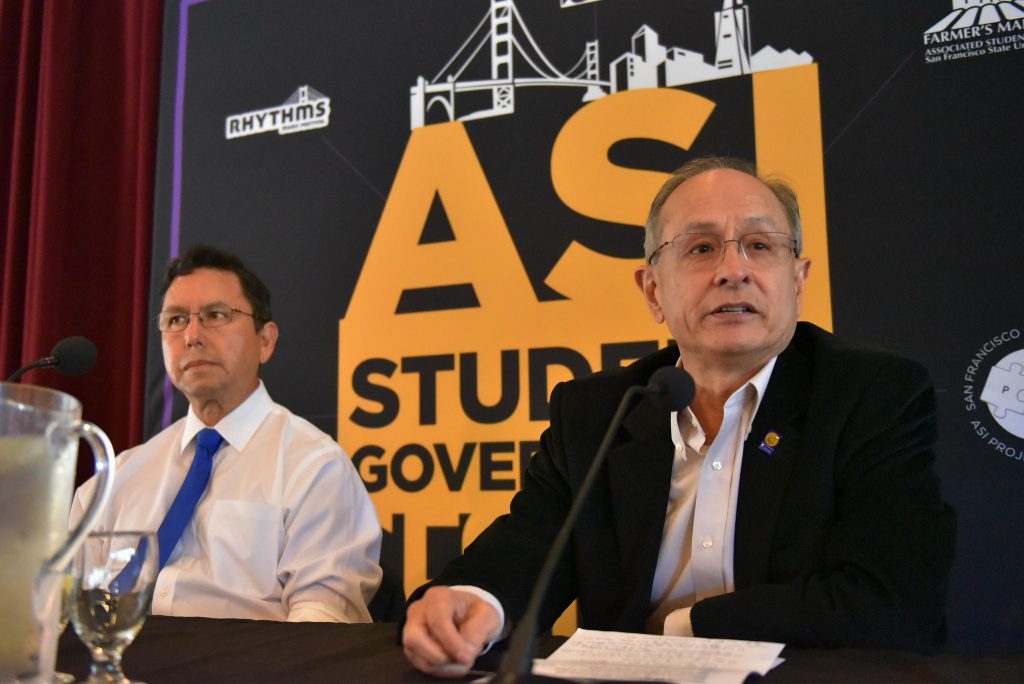 SF State President Leslie E. Wong announced he will not sign a pouring rights agreement with a major soda brand during a town hall meeting Thursday at the Seven Hills Conference Center.

“I have to tell you, I have not touched a sugary drink in three decades,” Wong said. “After careful review of the concerns and information I received from students – particularly students and other members of our community – I have decided not to move forward with the process for establishing a formal agreement with a beverage company.”

After months of debate, protests and rallies against the issue, Wong agreed to meet with students to discuss the agreement.

David Melville, a business administration major at SF State, said although he is pleased with the final decision made by Wong, he is still disappointed in the University for almost signing a pouring rights deal without student input.

“Behind my back, an action was about to be taken,” Melville, 32, said. “(The University was) about to make a deal with a Coke company for exclusive pouring rights on my campus. Why were we not involved?”

SF State is the only school in the California State University system to not have a pouring rights contract in place, according to the Real Food Challenge group, which has been vocal about its opposition to the deal.

The room at Seven Hills Conference Center, which hosts up to 300 people, was filled with about 150 attendees during the meeting.

Among the attendees was An Bui, president of the Real Food Challenge at SF State. Bui said he was thankful that Wong decided not to sign a pouring rights contract, since he thinks that SF State, much like the city of San Francisco, should be environmentally conscious.

“SF State is the only CSU without a pouring rights contract for a reason,” Bui said. “San Francisco is a leader in the field of environment and nutrition, and (SF State) should (and) can also be a leader in that field.”

Liana Derus, treasurer of the Environmentally Concerned Organization of Students, said that Wong made the right decision today, but in the future she and other students want the president to work more openly with the campus community.

“Thank you for your decision not to move forward with a pouring rights contract, but I hope that you are more transparent in your procedure when working with the Office of Procurement for future endeavors,” Derus said to Wong.

As President Wong entered the Seven Hills Conference Center, more than 90 student protesters waited for him chanting, “Where is Wong?” The students, many of whom were members of the Black Student Union on campus, demanded that, moving forward, Wong publicly acknowledge injustices everywhere, much like he did in the recent terror attacks in Paris.

“I hope you will support me if I propose to you that I would like to install watering stations, much like in the airports, where students for free can fill water bottles and not have to pay for water on campus,” Wong said.

Samantha Wooton, a senior geography student, said that the town hall meeting with Wong was long overdue. Wooton said the meeting should have happened months ago, before PepsiCo Inc. and Coca-Cola Co. were invited to speak on campus.

“I went to the Coca Cola and Pepsi meetings, and I was witnessing a lot of students who I knew skip classes to voice their opinions at soda companies who were manipulating us,” Wooton, 22, said. “They were invited onto our campus to advertise themselves. Unfortunately, I was kind of offended that President Wong wasn’t there personally. Obviously, thank you so much for not signing the pouring rights agreement — that meant a lot to me and a lot of other people — but yeah, I think that this town hall meeting should have been held confidently and very openly before Coca Cola or Pepsi were invited onto our campus.”

Vice President of Administration and Finance Ronald Cortez, who sat next to Wong during the meeting, said that students’ comments about improving shared governance and transparency on campus will be taken into account by the administration moving forward.

“I would like to thank everyone for coming and voicing their opinion in such a productive and positive manner,’” Cortez said. “I tried to listen and write down some of the comments I heard during this presentation, and I heard things like, ‘This is an amazing university.’ I also heard lots of comments about transparency, and I think those are things that we definitely need to listen to, and as far as process improvement and making things better for the University; that message was definitely loud and clear from a number of speakers.”