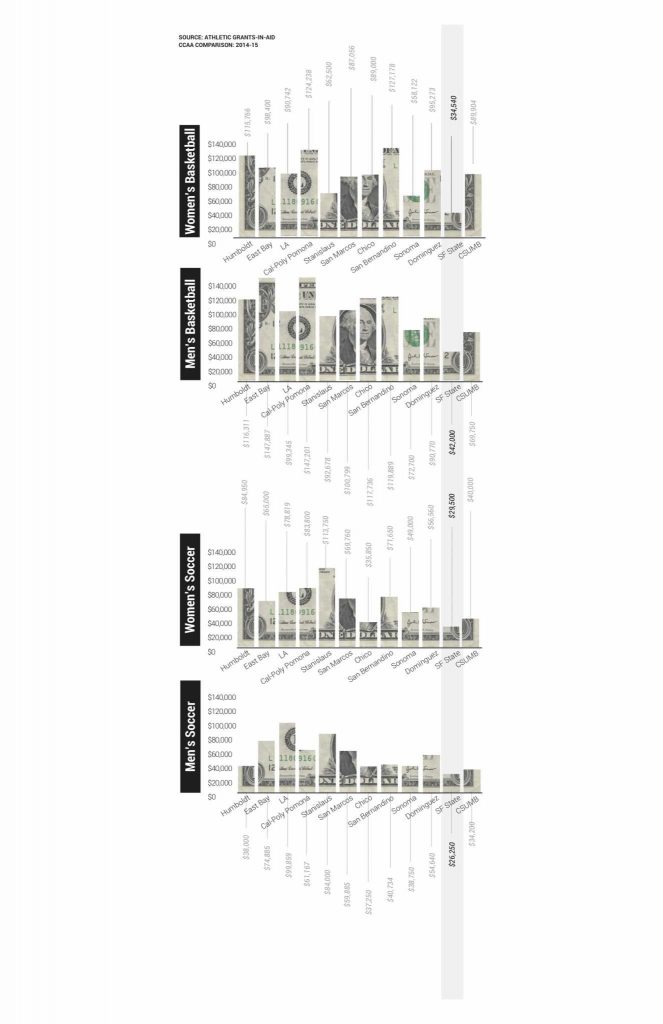 [/media-credit]Successful programs in the fiercely competitive California Collegiate Athletic Association depend on talented scholarship athletes to take them to the top. With the lowest scholarship funding in the conference, SF State faces the challenge of competing in the CCAA every season.

“In Division II, scholarships is the great equalizer,” Guthrie said in an email. “If you look at most of the competitive Division II programs in the country, there is a clear correlation between funding and performance.”

SF State has more than 280 student athletes, according to Guthrie, but only 150 are on any type of scholarship, which can range from small grants to full rides. Having limited monetary resources makes it difficult to entice star athletes to come to SF State, Guthrie said.

“Scholarship aid is the key to recruiting talent,” Guthrie said. “And because SF State has limited scholarships, our coaches often cannot secure more than one or two elite athletes per team or add depth required to overcome injuries and compete over a long, grueling season.”

Each SF State coach decides the amount of aid and which players on their roster will receive money. Women’s soccer head coach Tracy Hamm said skill level is not the only factor on which she bases her decision.

“I don’t equate the level of talent to what (the athlete’s) scholarship offer is; I actually try to look at their need,” Hamm said. “I really spend time trying to get to know (the players) and their families and their situation, where it’s more-so based on that, as opposed to awarding them for being good athletes.”

Men’s basketball head coach Paul Trevor said it can be a struggle to build a Division II championship program at SF State because of the high cost of living in San Francisco.

“It hurts your recruiting pool,” Trevor said. “You’re focusing on kids who can either afford it or get a lot of financial aid. You have to find a unique kid who really wants to be there, because they might have to sacrifice some money to be part of our program.”

The men’s basketball team received $42,000 this year to use for scholarships, which was the lowest total in the CCAA by a little less than $28,000.

Despite working with less money than competing conference schools, Trevor said he never uses money as an excuse for poor performances by his team.

“We work as hard as everybody else, if not harder,” Trevor said. “We might have to do things better to achieve our goals because we’re not quite as talented, but it’s never a crutch. You’ll never hear us say, ‘Oh, we’re just not good enough.’ No, we’re going to fight. I’m going to fight. Even without money, we never stop fighting.”

President Leslie E. Wong announced in an email Nov. 19 that the University will not be partnering with PepsiCo Inc. or Coca Cola Co., a decision that he said would impact the state of scholarship funding.

“This decision will mean the loss of potential funding for student programs, scholarships and athletics,” Wong said, who stressed that he is looking for alternative methods of funding those programs.

SF State managed to succeed in athletics this fall, despite having the lowest amount of money to spend on scholarships. The women’s volleyball team qualified for the CCAA playoff tournament, and the men’s soccer team finished with their first back-to-back winning seasons in 35 years. Guthrie said he is pleased with the improvement of the SF State athletics program but added that additional funding could be the key to taking the next step to being an elite school.

“With a small investment in the grand scheme of things we can turn this program into one of the dominant programs in Division II, quickly,” Guthrie said. “This is not a 10-year process. Overnight it could generate another level of excellence, excitement, put us on the map and let the region see our great academic programs.”