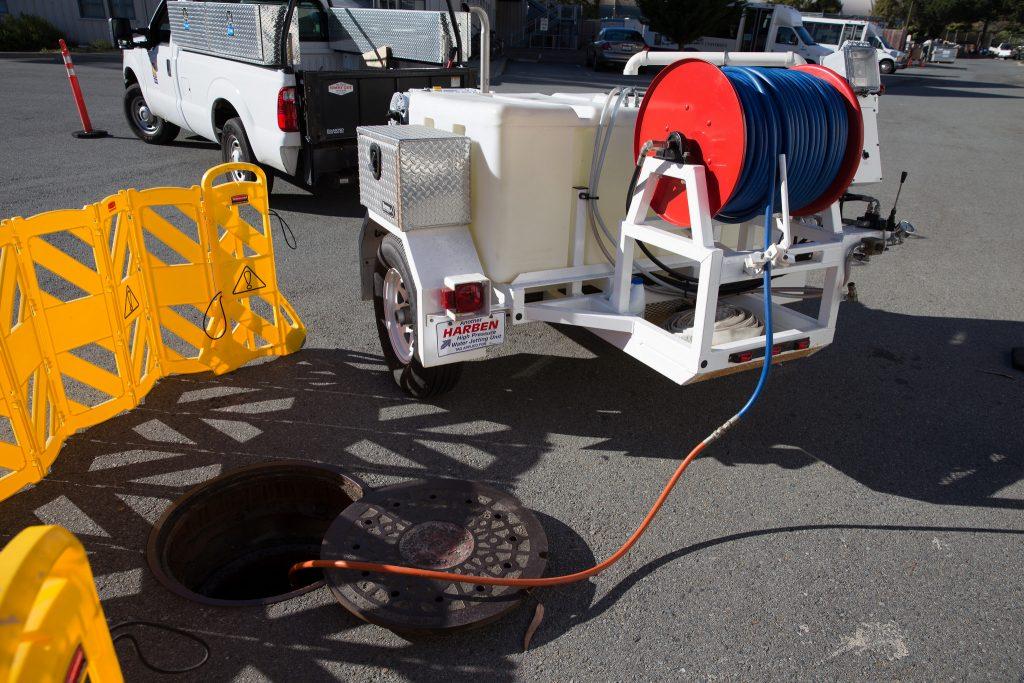 SF State utilizes a high pressure pipe jetting system, shown in the Corporation Yard on Monday, Nov. 16, 2015, to clear clogs in storm and sewer drains. The system uses a diesel engine to pressurize water to 4,000 pounds per square inch, which drives the hose and head into the pipe and breaks up the blockage. (Brian Churchwell / Xpress)

With El Niño rapidly approaching, California is predicted to have one of the most intense and wettest winters in the past 100 years, according to Frank Fasano, interim associate vice president of facilities and service enterprises at SF State.

“The main El Niño impacts will come during late December through March,” said David Reynolds, the lead meteorologist at the National Weather Service Forecast Office in the San Francisco Bay Area. “I am not saying we could not get a few strong storms with high winds, down trees and power outages, as in any winter. It is just that you should expect more rainy days than normal. Especially since we have had four dry winters in a row.”

The National Weather Service’s Climate Prediction Center reported that some conditions of El Niño are currently present; including continuous sea surface temperature anomalies in the Pacific Ocean, according to a report released Nov. 12.

El Niño is not a storm, but a rapid warming in ocean temperatures in the eastern tropical Pacific that interacts with the atmosphere to produce an abnormally strong jet stream, causing several storms to hit consecutively, according to John P. Monteverdi, professor of meteorology at SF State.

“El Niño-influenced storms usually produce moderate-to-heavy daily rainfall totals but nothing extraordinary,” Monteverdi said in an email. “What becomes ‘extraordinary’ is that we get repetitive storm events – many days with rain – because the jet stream, aka storm tracks, becomes fixed over central and Southern California.”

Both Fasano and Monteverdi advise students that the heavy storms may lead to blackouts, flooding and leaking on campus.

“We’re expecting a very harsh rain situation this year – it could be one of the 50 or 100-year rains,” Fasano said, explaining that rain this year may be the heaviest up to 100 years ago. “They’re expecting possibly even more than that, according to some of the different reports and people that are trying to gauge this.”

Environmental studies major Rachel DeLuca said she is preparing for the inevitable transportation delays the approaching storms may cause.

“Students who live on campus in (University Park North) and (University Park South) have to walk to school and they might be discouraged to go to class during winter months because of the long walks,” DeLuca said. “People just need to be prepared that transportation will take longer and to also secure (their) homes to ensure protection from water as well as power outages.”

SF State facilities and service enterprises have been removing dead trees that could fall during a storm and regularly assessing roofs around campus as preemptive measures, Fasano said. The department has also been conducting weekly and monthly checks around campus to make sure that storm drains remain free of debris, according to Fasano.

“I think it was last year, there was quite a flood that happened because of some of the configurations of the drainage system (on campus),” Fasano said. “We’re trying to be proactive and manage the water rather than letting it build up and overflow onto our campus.”

Due to the flooding last year from flash floods and strong winds that shut down the campus, the department has been working with the San Francisco Public Utilities Commission and Cal Trans to install additional storm drains and associate piping to help relieve potential flooding on 19th Avenue near Hensill Hall, Fasano said.

The campus recently acquired a high-powered “jetter,” which Fasano called a “last-line of defense.” The machine can unclog storm drains and drainage pipes when there is serious clogging due to high-impact storms, he said.

“We own that (machine), and we have that on site. It’s been inspected and is ready to go in case we have any storm drain clogging,” Fasano said.

The heavy rains may also result in the campus having to shut down for ‘rain days,’ Fasano said, reassuring students/faculty and staff that in the event of unsafe conditions that may cause damage or put anyone in danger, SF State administration would make decisions accordingly.

Facilities and service enterprises would like to remind students, faculty and staff during rainstorms to close doors and windows after leaving any room on campus in order to prevent flooding.

“I can’t give any better advice than that,” Fasano said. “People just don’t think about it. If we have one of these vicious rainstorms, it could cause major flooding damage inside the buildings on something that could have been avoided.”

The light rainfall that hit the Bay Area earlier this semester, around Halloween, was a good test to help the campus prepare for the storms expected this winter, according to Fasano.

”We had a little minor leaking but nothing major. We know some areas that are potential leaking areas, and we’re trying to mitigate that before the rains starts, but you never know,” Fasano said. “It depends on the condition of a roof and a lot of things – new leaks can develop.”