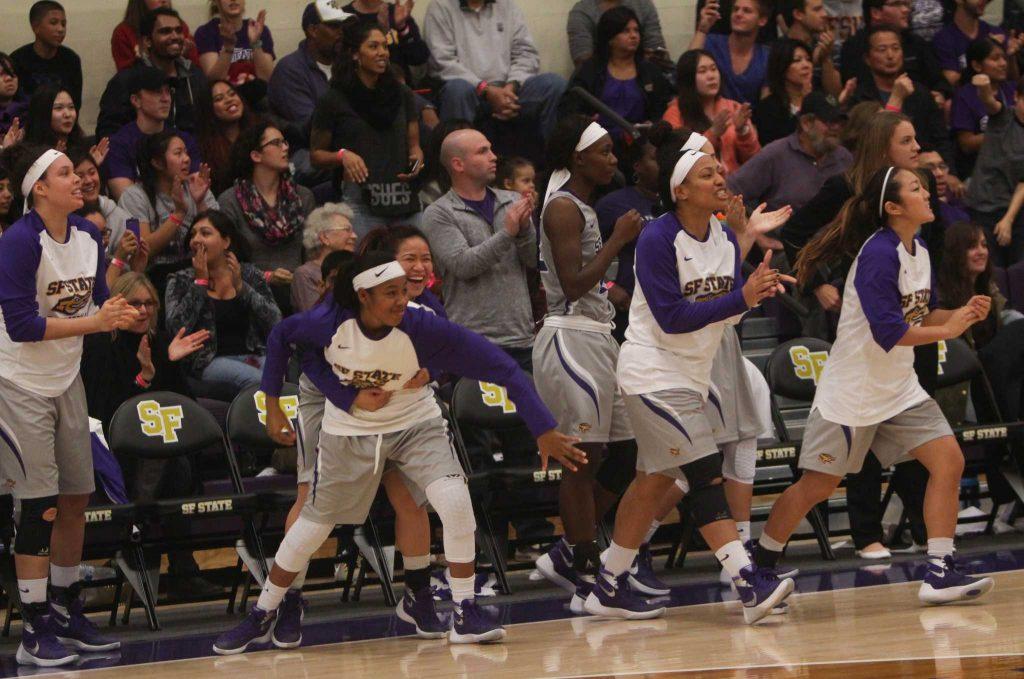 Team members of the SF State Gators women's basketball team run to the court after defeating the Chico State Wildcats in the Gymnasium Friday, Dec. 4, 2015. (Xpress/Kofman)

Trailing 46-47 to California State University, Chico with six seconds left, SF State’s Tatsiana Dashkevich had three free throws to take the lead after being fouled on a 3-point attempt.

During a televised game, in front of the largest home crowd of the year, Dashkevich made all three free throws to help seal a 49-47 Gator victory.

“You have to make those shots — there’s no way you can miss them,” Dashkevich said. “I was focused on my shots; I was trying to isolate myself from all the fans.”

The Wildcats attempted one last 3-pointer as time expired, but Gator guard Naila Washington blocked the shot to secure the win.

The turning point in the game came late in the third quarter. After the Gators tied the game at 25, the Wildcats went on a 9-2 run while the Gators missed six straight shots.

In four consecutive possessions, the Gators fed the ball to forward Laura Lawson in the post, and she delivered all four times. Lawson scored all eight of her points in a span of three minutes from the end of the third period to the beginning of the fourth.

“Laura Lawson carried us for a stretch there,” said head coach Dennis Cox.

On the next possession, after getting an offensive rebound, the ball found its way back to Lawson. She passed to Naila Washington, who hit a wide open jumper to cut the lead to one.

Late in the fourth, after Gator Felicia Villarruel tied the game again at 42 with a huge 3-pointer, the Wildcats hit a quick 3-pointer and layup on consecutive plays to go up 47-42. On the next possession with only 1:40 remaining, SF State guard Tiana Henry hit a last-second jumper while the shot clock expired.

Washington again cut the lead down to one with a layup. On the Wildcats’ ensuing possession, Washington was called for a shooting foul against Wildcat forward Natalie Valenzuela. Valenzuela missed both free throws.

Dashkevich’s three clutch free throws came on the next possession to seal the victory. She finished with seven points.

Freshman Kiara Ginwright had a standout performance, blocking a season high nine shots and grabbing eight rebounds. Ginwright blocked five shots in the first half, contributing to the Wildcats poor 23-percent shooting rate in the first half.

The Gators bench had another strong performance with 22 points scored, led by Tiana Henry and Trayona Thomas, who both scored seven.

“Coach told me to be ready today, so all day today I was thinking about this game,” Henry said. “We stepped up tonight on the bench.”