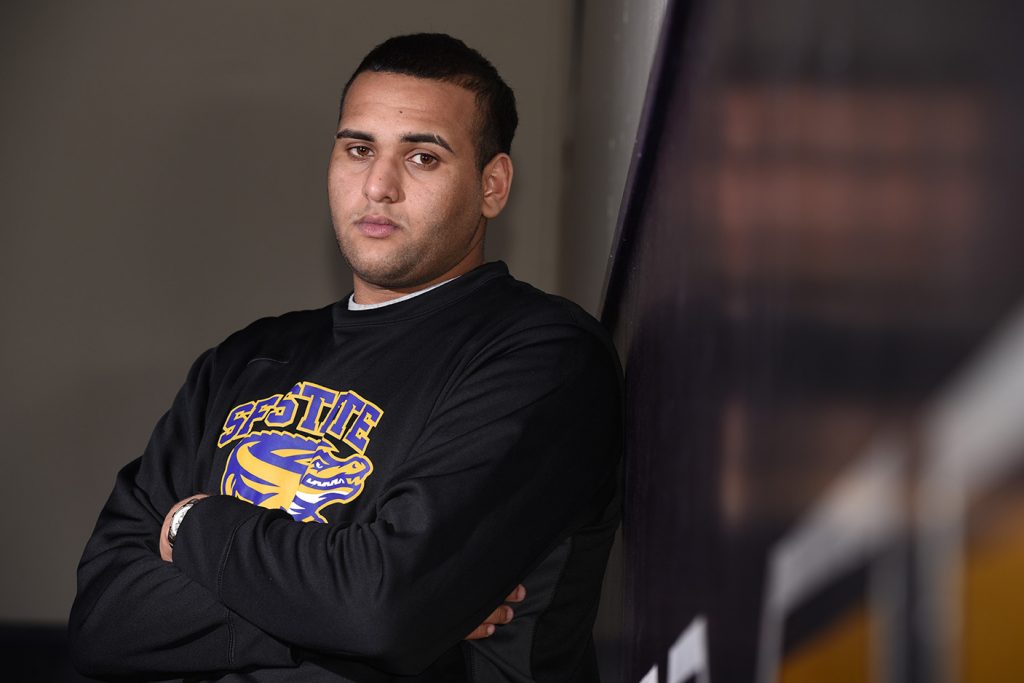 The sound of wrestlers being thrown to the mat and the rabid crowd bounced off the pale green trees during SF State’s outdoor wrestling meet against Division I California Polytechnic State University, San Luis Obispo Nov. 7. Mixed with the cries of the spectators were shouts of encouragement from 6-foot-4, 285-pound SF State heavyweight Sam Alnassiri.

Alnassiri paced back and forth outside the ring, clapping his hands together, saying, “Come on guys, let’s go! Wrestle! Wrestle!”

“I like to be pumped all the time,” Alnassiri said. “I feel like me cheering just makes (my teammates) want to go harder. That’s why I’m always the loudest one on the sideline, yelling and always just pumped and trying to motivate everyone around me.”

When it was finally time for Alnassiri’s match in the ring, the Sacramento product said he used his frustration and anger to beat his opponent, fueling him to a major decision over Cal Poly’s Cortes Morales 14-5.

“I see it as ‘I bleed, he bleeds, we all bleed the same blood,’” Alnassiri said. “They may be at a bigger program, and they may be top-ranked coming out of their high school, but it’s whatever.”

The junior heavyweight was ranked No. 1 in his weight class in the first 2015-16 regular season ranking of the Division II Wrestling Coaches’ Poll-Super Region IV. Prior to the Cliff Keen Las Vegas Invitational Dec. 4, Alnassiri had a 6-2 record, with one of those wins being a major decision. Nov. 15, at the Roadrunner Open, he placed fifth and had four victories, all of which were against Division I opponents.

“(Sam) is the team’s emotional leader,” SF State wrestling coach Lars Jensen said via email. “He is always motivating his fellow student athletes, whether it be in practice or competition. Sam responds well to verbal cues and is very coachable.”

Alnassiri has been wrestling since middle school, following in the footsteps of his older brothers, who wrestled as well. He said wrestling has helped keep him on a straight path.

“Wrestling kept me out of trouble,” Alnassiri said. “It made me keep a good grade point average. I had to go to school, get good grades and go to practice, which kept me away from other kids trying to get me in trouble.”

While in high school, tragedy struck for Alnassiri when his best friend Jimmy Doan passed away.

“He was trying to cut weight to try to get to 103, but his natural weight was higher than that and he was just too skinny,” Alnassiri said. “One day he was boxing with one of my other friends, and he just collapsed in the ring. It was a hot day in Sacramento and his heart just stopped working.”

Alnassiri said his friend’s passing was hard, but he uses it as fuel to continue to improve as a wrestler.

“Ever since then, I’ve always been striving for greatness, because he was so motivated to make the state tournament, so I just had the mindset that I had to make it for him,” Alnassiri said. “He’s always in the back of my mind. I’m grateful and blessed that he was a part of my life, and he’s the reason that I’m where I’m at today.”

“Sam’s always yelling,” Giron said with a smile. “During the Road Runner Open, I could hear him yelling from the side, and it definitely helps. You hear his voice, and it either makes you mad and makes you go harder, or it pumps you up to get that extra takedown or get off bottom.”

Besides wrestling, Alnassiri said he is also interested in pursuing a career in his major, criminal justice.

“I’ve always been the nosey type and always wanted to know everything,” Alnassiri said.  “I’ve always watched the FBI shows and the criminal shows, and ever since then, I’ve just wanted to do what those guys are doing.”

Once Alnassiri is done wrestling at SF State and is chasing down criminals in alleyways, he said he’s always going to come back to the program.

“This program has had such an impact on me,” Alnassiri said. “I’m always going to be around this program in the future. I’m going to come in and wrestle with the new kids and be a proud (alumnus).”