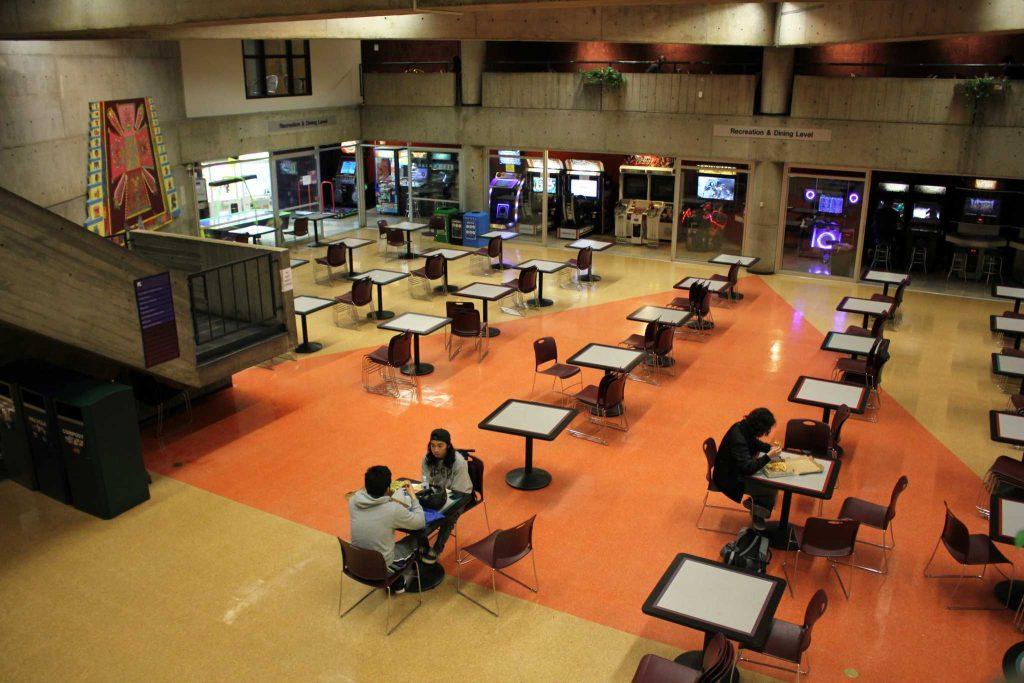 Students sit and eat in the near empty basement of the Cesar Chavez Student Center at SF State on Tuesday, Jan. 26, 2016.

Students have settled back onto campus after the long hiatus of winter break as reuniting smiles, crowded walkways and lingering lines in the bookstore signify the beginning of the spring semester. However, just a few weeks before, SF State was a barren ghost town for those who decided to call campus home for the more than five-week-long break.

“I work and I had no desire to go home, and I have a lot of friends in the city,” said Zeneve Diaz, a junior majoring in dietetics who lived in the Towers at Centennial Square for the break. “Everyone was gone, it was super-dead, really quiet, and it was honestly really boring.”

License agreements for the Towers at Centennial Square, Village at Centennial Square, University Park North and University Park South allow students to stay for winter breaks, according to the SF State Residential Life website. In the agreements for the residence hall and the science and technology theme community, students must sign an addendum to the agreement and make an added payment in order to live there between the semesters.

Lauren Diez, a junior majoring in physiology, works as a University Property Management service desk student Assistant, which required her to stay for three weeks during the break. While working in the housing communities, she described that the overall atmosphere of the campus was desolate.

“The campus was pretty dead after finals ended, and the only students that came onto campus were those who were still living in the dorms or those who were taking a winter session class,” Diez said. “I think the reason some students stay on campus is because they either have to work and can’t get time off, they’re on a sports team and have to stay for practice or games, or they live out of state and aren’t able to afford to go home.”

Jasmine Johnson-Bowles, a freshman majoring in psychology who stayed in the Towers, said she and her roommate came back two weeks early for work in the city.

“It was really empty, and it sucked because the Village Market and Subway were closed,” Johnson-Bowles said. “We couldn’t get food from campus, so we had to grocery shop. Also, when we closed at work late at night, walking back was really creepy since no one was around.”

The month off from school did provide many students who chose to stay with a long-awaited opportunity to relax after the strenuous semester.

Odalis Samano, an undeclared sophomore, lived in the Village for the entire break because her mother, who resides in Richmond, recently moved into a smaller space. She said that one of her roommates had also stayed the whole time, and that she noticed there were more students who remained on campus than she had expected.

“I mostly stayed inside, and the Internet was super fast without all the people using it, so I watched movies and TV shows,” Samano said. “I also slept in a lot. I did go outside sometimes, to walk around or go downtown. I mostly went to Stonestown and went shopping or just looked around.”

Several resident assistants joined students and lived on campus over break, including Kinsey Thomas, a sophomore majoring in pre-apparel design and merchandising. Thomas said she had to come back early since she was enrolled in fashion illustration during the winter session.

“A lot of people left, and it was kind of relaxing, since, yes, you’re still in a school setting, but there weren’t as many people and as much commotion,” Thomas said.

Crystal Sepez, an American Indian studies major who lived in University Park South for nearly the entire time, except for a week around the holidays, said she worked in retail to keep her busy.

“Those [students] without jobs keeping them here went home, and most people were gone the last week of December, at least,” Sepez said. “As much as I enjoy peace and quiet, I’m excited for the new semester.”