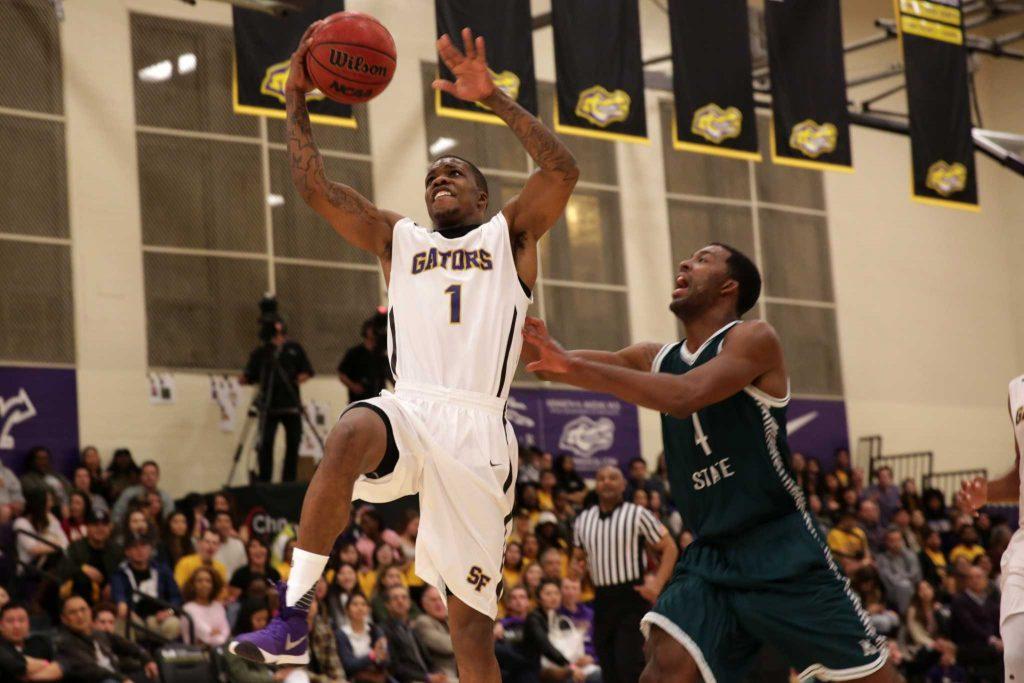 SF State Gators’ guard Warren Jackson (1) makes a charge towards the basket in the first half of a game against the Humboldt State Lumberjacks at The Swamp at SF State on Friday, Feb. 5, 2016. The Gators won 85-59.( Ryan McNulty / Xpress )

It was a packed, noisy house at The Swamp as SF State had one of their best games of the season at home when they defeated Humboldt State 85-59.

The Gators had a great game on both ends of the floor. They were playing aggressively and with a high-energy level. It was true team effort, according to head coach Paul trevor

“Guys came out and defended with great passion,” Trevor said. “It helped us offensively.”

Both teams were off to a fast start, swapping buckets, but the Gators continued to knock down their shots as the Lumberjacks went cold. The Gators never took the foot of the gas pedal after a 13-0 run late in the first half. Four players scored in double-figures.

It was a tale of two halves for Jon McMurry. He struggled in the first half, putting up only two points, and shooting 1-for-7 from the field in 11 minutes. Coming off the bench, the team needed his scoring abilities, but he was unable to get shots to fall down.

“I don’t know if I ever shot that bad in the first half,” McMurry said. “Whenever I have a bad half like that, I know I put way too much work. I’ll never have two halves like that in a row.”

SF State Gators’ guard Treaven Duffy (32) goes for a lay up in the first half of a game against the Humboldt State Lumberjacks at The Swamp at SF State on Friday, Feb. 5, 2016. The Gators won 85-59. ( Ryan McNulty / Xpress )

McMurry’s teammates were able to find him at the right spot at the right time. McMurry came out firing with confidence, making all five of his shots in the second half. He went 4-for-4 from 3-point range after missing all four of his attempts in the first half. He finished with a game-high 16 points and also had three rebounds.

Floyd Wormley and Brantley Bynum had efficient first halves that helped the Gators take the lead. Wormley finished with 14 points, eight rebounds, and one steal, block and assist. He was perfect on all three of his shots from downtown.

The Gators shot 47.5 percent from the field, and held the Lumberjacks offense to 34 percent shooting. The largest lead of the game for the Gators was 32 points. SF State had nine steals to Humboldt’s one, which shows how aggressive the defense was.

To beat a team that’s top in conference standings is a good sign.

“It’s only one win, but it means we’re starting to play better,” Trevor said.

Before the game, The Swamp was filled with an energetic atmosphere that surely had an impact on the game. The Gators’ players were dunking during shoot around, receiving cheers from the crowd.

“It’s amazing,” Bynum said. “We all want to go out there and dunk and show out, so it makes the energy that much higher.”

It was an atmosphere that every team craves when playing on television, McMurry said.

“Guys got pretty excited for that and we jumped on (Humboldt State) early and we never looked back,” Trevor said.

The Gators face Cal Poly, Pomona tomorrow at The Swamp at 7:30 p.m.