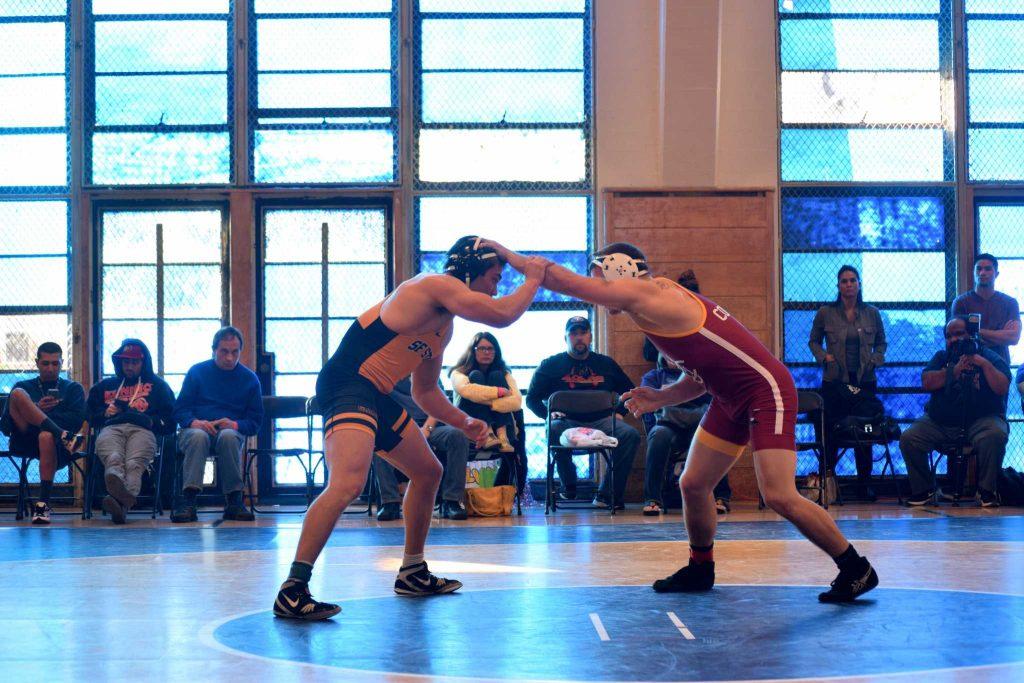 The Gators won one of their two meets during their last home matches of the season. SF State defeated Simon Fraser University, 33-14 and lost to Colorado Mesa University, 23-14.

Before the first match of the day against SFU, three Gator seniors were honored on senior day. Calvin Nicholls, Travis Ino and Gabe Fuentes were all give large commemorative posters and had family and friends in attendance to watch them wrestle.

None of the graduating seniors were able to win a match, but Gabe Fuentes came close in his two matches. He lost his first against SFU wrestler Morgan Smith, 13-5. In his second match, Fuentes lost to CMU wrestler Zak Slotten, 5-3. Despite the losses, Fuentes said he still enjoyed the day.

“Today was emotional,” Fuentes said.  “I love wrestling and I love the battle. I’m really happy that I get the privilege to go out there and wrestle and battle.”

Head coach Lars Jensen said the day was a great way to pay tribute to the three very hardworking seniors.

“We want to honor them,” Jensen said. “It was a pretty tight dual meet and they wrestled really hard. I’m pretty happy they’ve gone through the program, and hopefully they live a successful life and give back to the program as well.”

The best performer for the Gators on the day was Sam Alnassiri, who won both of his matches. He won his first match in overtime, and he won his second by defeating CMU heavyweight Colter Bentley, 11-2. Alnassiri said he was pleased with the wins, but said it certainly wasn’t easy.

“(The matches) went kind of rough today,” Alnassiri said. “First match went into overtime, and then I ended up getting a pin. Second match, I came into it more focused, more ready. I got that first match out of the way, and then I was able to wrestle a tough match.”

Jensen said Alnassiri performed great, and overall it was a solid performance from his team.

“I thought we competed pretty hard,” Jensen said. “Against Mesa, I thought we could have wrestled better. We lost a couple of close matches.”