Freshman is flourishing into star-caliber track and field athlete 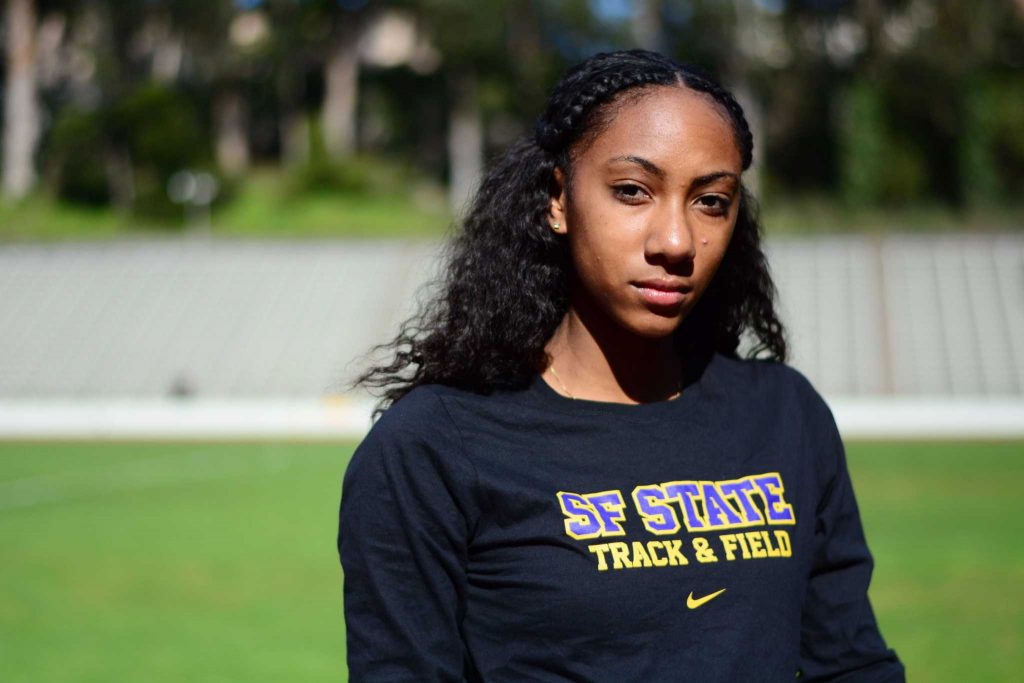 Devanique Brown a freshman on the San Francisco State University track and field team poses for a portrait on February 4 2015. (Xpress/Connor Hunt)

Sauntering down the crowded, athlete-filled, purple-and-yellow hall of The Swamp in a grey hoodie and black track pants is Devanique Brown, an 18-year-old freshman in the midst of her first college track and field season.

Brown is one of SF State’s newest additions to an already talented track and field team. At the University of Washington Preview on Jan. 16, Nicole Uikilifi, Kayla Philips and NyErin Buckley each placed eighth or better in their respective heats of the weight throw, triple jump and 200-meter dash.

Brown, a rap and freestyle dance enthusiast, improved her times in each of the first two track meets of the season. In her very first race at the University of Washington, Brown advanced to the second round of 60-meter hurdles with a time of 9.28 seconds. She missed the finals after placing fourth (9.31) in preliminaries.

In her next meet, at the Boise State University Invitational, she advanced to the 60-meter hurdles final with a personal-best time of 9.19, which was third in the heat. In the finals, Brown ran a similar time of 9.20 that placed her seventh. Brown attributes her improvement to working on her technique.

“In practice, (head coach Kendra Reimer) pushes us a lot, especially on speed work and technique,” Brown said. “No matter what we’re doing, we always go back to technique because there’s things that can be fixed.”

Brown comes from a family of athletes. Her mom was in track and field and her dad played basketball and football. Brown was on the volleyball and basketball team during her freshman and sophomore years at Vallejo High School.

Second-year head coach Reimer said the first time she saw Brown run was at a track meet in Sacramento that qualified runners for state. Brown ran the 300-meter hurdles and was beating the other girls, who were extremely fast, by 200 meters, according to Reimer. Brown’s natural speed and build were enough to entice Reimer to recruit her.

Reimer said she contacted Brown’s high school coach and the two spoke about her talent, but most importantly, academics and work ethic.

Reimer’s plan for Brown coming into the season was to work on technique while developing her physical traits. Despite being new to college-level training, Brown has been able to react and adapt to coaching cues.

“I thought it would take her a bit of time to hit these points,” Reimer said. “We’re pleased with her progression.”

Brown has exceeded expectations so soon that Reimer and her staff have been working with Brown on the high jump. In Brown’s last meet, she joined the team’s 4×400-meter relay team.

“Her potential is endless,” Reimer said. “We’re excited with where she’s at.”

Kayla Phillips, Brown’s friend and teammate, said Brown is a talented athlete who enjoys competing in other events.

Reimer and staff believe Brown can develop into an All-Conference player.

“We don’t know where she’s going to be four years from now,” Reimer said. “She’s still growing into her body. The person she is now could be way different three years from now.”