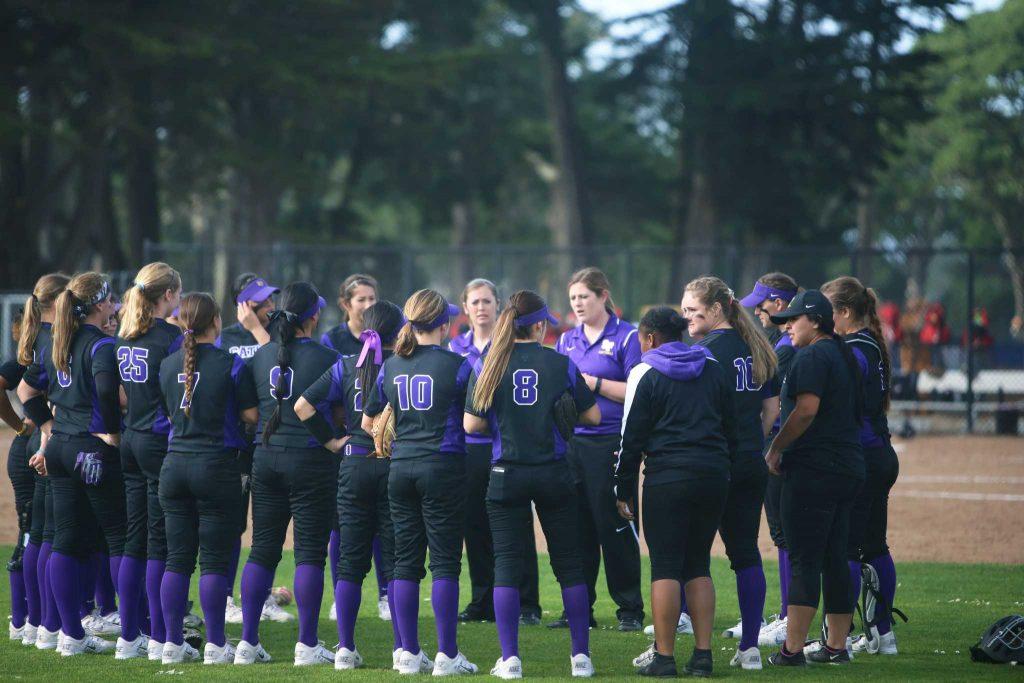 Junior pitcher Megan Clark and a strong defense led the Gators to win the first game 4-0. A fourth-inning rally spurred the Gators to finish off the Crusaders 7-5 in the second game of the double-header.

Clark got the start for the first game and threw a three-hit complete game shutout. Clark looked like an experienced pitcher stepping up to the mound cool and calmly. Clark earned her first win of the season behind a Gators’ four-run

“Today my curve was really working, which helped, and a fantastic defense,” Clark said.

The Gators’ offense came alive in the bottom of the fourth inning after a couple of wild pitches from Crusaders starting pitcher Kendall Goodwin. With runners on first and second, the wild pitch allowed for the runners to advance. Marisa Andrade, who plays first base, hit a sacrifice fly for the first run of the season that gave the Gators a lead they wouldn’t relinquish. Right fielder Mallory Cleveland and Kayli Shaw, who plays second base, each had one RBI.

The defense held its ground against the Crusaders, ensuring Clark got her first win.

A run was saved in the seventh inning by center fielder Alexis Mattos’ throw to home after the Crusaders had a base hit.

It was a cool and breezy afternoon for the second game of the double-header.

Just like the first game, a fourth-inning offensive eruption propelled the Gators to victory over the Crusaders.

Allen said going through the Crusaders’ lineup twice allowed the Gators to make adjustments and get comfortable in the box.

“Going through the lineup the first time, we’re all coming back to the dugout telling each other what we see,” Cleveland said. “We made the adjustments, just communicating with each other so that next time around we can just smash it like we just did.”

Guzman gave up a run in the first but continued to pitch behind a solid defense. Guzman was pitching well until she faced trouble in the sixth inning. She gave up a hit by pitch and a single before giving up a three-run home run that cut the Gators’ lead from five to two runs.

Allen called for a pitching change, bringing in senior pitcher Jennifer Obbema. Obbema threw two scoreless innings to get her first save of the season. She received defensive support as the Gators turned a 6-4-3 double play to end the sixth inning.

Sara Higa’s single ignited a five-run fourth inning that helped the Gators take the lead. With the bases loaded, catcher Angelica Terrel had an RBI-single. A couple of errors from the Crusaders also helped the Gators score.

Higa, who plays third base, and Andradre, provided insurance runs behind Cleveland’s and Shaw’s RBI-single, respectively.

Cleveland had a great season opener going a combined 3-4 with 2 RBI and runs scored.

The Gators travel to Belmont to take on Notre Dame De Namur in another non-conference game Feb. 13, at 12 p.m.