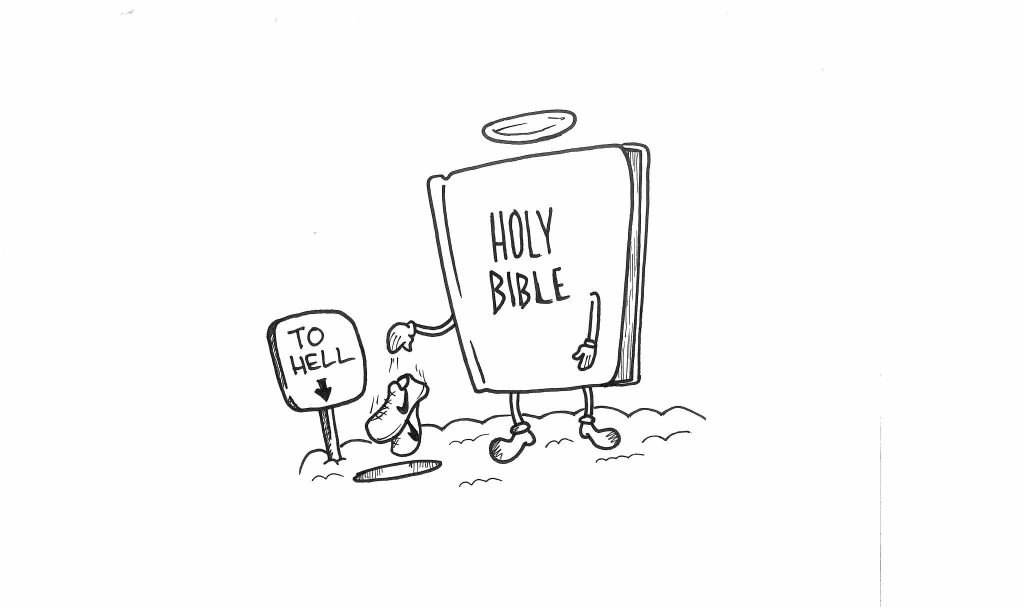 I’ve always had a strong, “you-do-you” policy when it comes to religion. You do you, and you believe in what you want, as long as you aren’t harming anyone.

Growing up, I remember sitting in my Sunday school class and thinking, “Hey guys, this isn’t for me. You all look ridiculous with your hands in the air. But you do you. It’s not harming anyone.” It wasn’t until I started attending more adult services that I saw how ignorant some people can be.

My mom’s church had sermons that slut shamed my mid-2000s queen Fergie, my step-mom’s church handed out “Yes on Prop 8” signs like they were candy, and my dad’s church featured a testimonial from a sobbing mother who struggled with living with her lesbian daughter.

The one thing all these people had in common, from the slut-shaming sexists to the homophobes, was they backed up all their opinions with the Bible. All those people need to realize, that even if you have an ancient book to back up your claims, that doesn’t make you right. Religion can be used for good, but spreading hate isn’t helping anyone.

When Manny Pacquiao was dropped by Nike this week for homophobic comments in which he compared gays to animals, I went to his Facebook profile hoping to see hoards of people dragging him through rainbow-colored mud. Instead what I saw were hoards of people encouraging him to keep following God and writing open letters to the gays that let them know God loved them, He just hated their lifestyle choices. Bible verse after Bible verse was quoted to back up Pacquiao’s claims.

I understand there are Bible verses that can be interpreted to be anti-gay, but that doesn’t mean you have to listen to them or interpret them in a way that makes you vehemently homophobic. The words in the bible were written by a bunch of men who didn’t clean their own balls on a regular basis, so why are we still taking them at face value thousands of years later?

I’m honestly tired of reading and reiterating why the Bible shouldn’t be taken literally. If we’re taking the Bible literally, you shouldn’t boycott Nike because they accept queer people – boycott them because their standard shoe model features an average of 30-plus materials, according to Nike. Leviticus 19:19 clearly states that you shouldn’t “wear clothing woven of two kinds of material.”

If we’re going to listen to a bunch of dead, dirty-balled men, we should at least listen to all their insightful words. Stop getting tattoos, getting divorced, shaving your face, eating shellfish and wearing jewelry. I understand that it will be hard for conservatives to clutch their pearls when they see a gay couple in public if they can’t wear jewelry, but I’m sure they’ll manage somehow.

The only fond memories I have of going to church when I was younger were when I engaged in community service and actually helped people. I’m sure I would have had a lot more time to do those things if I spent less time hearing about how Fergie was channeling Satan in the video for “I Gotta Feeling.”

If people spent more time focusing on doing good than hating people because an old book kinda told you to, we would live in a better world. And if Pacquiao spent less time hating gay people, maybe he would have more time to focus on actually winning big Vegas fights.