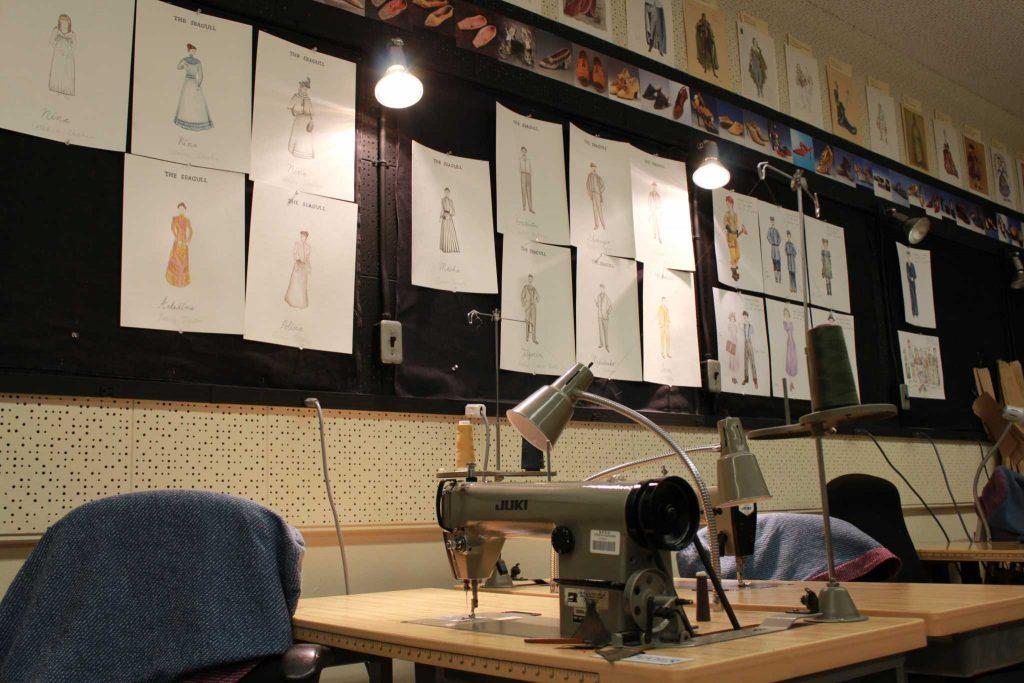 Seagull costume designs displayed on the wall at The Costume Shop inside the department of theater arts on Monday, Fed. 29, 2016. (Ryan Zaragoza / Xpress).

“10 minutes to curtain!” the stage manager enthusiastically shouts into a backstage dressing room where an array of theatre students hurriedly rush to apply their make-up and rehearse lines before the show begins. “Thank you 10!” the student actors reply, and immediately there is a noticeable energy shift across the room.

“The Seagull,” a play by Anton Chekhov, premieres Thursday at the Little Theatre on campus. The production is described as a “slice-of-life” drama that focuses on a family of artists living on a Russian farm in the 1800s. Every character featured in the show is challenged to live life to it’s fullest extent, despite any pitfalls or shortcomings that they face.

Director Bill Peters said he chose to do the show over a year ago.

“I’ve worked on other Chekhov plays, and this was one I’ve always wanted to do,” Peters said. “It provides a wonderful range of opportunities for our acting students.”

Senior theatre arts major Aaron Moses plays Yevgeny Dorn, an obstetrician and a close friend of the family whom the play follows.

“The show is about love, art and the subtle events and experiences that can affect, change, ruin, save and overall change one’s life,” Moses said.

According to Peters, theatre students auditioned for the production last fall and continued to rehearse throughout winter break in order to prepare for the show’s premiere.

“Chekhov isn’t easy to rehearse – his work doesn’t break down easily into small scenes,” Peters said. “You’re pretty (much) rehearsing a society; (there are) a lot of people on stage at the same time, and they all have to be their own individual, each with their own traits and personality.”

Taylor Wuthrich, a senior theatre arts major, had studied Chekhov in the past, and ended up being cast in Peter’s production.

“I was actually in a Chekhov scene study class last spring, and coincidentally, our teacher has us working on scenes from ‘The Seagull,'” Wuthrich said. “When I heard Bill was directing Chekhov on the main stage, I knew it was an opportunity I couldn’t pass up.”

Rachel Antone, a senior theatre arts major, is in charge of designing costumes for the show. According to Antone, the costumes are old-style pieces that draw upon a bohemian aesthetic.

“It’s a pretty extensive process for the designers,” Antone said. “I started last semester right when it started in September and we had a collaboration class with the set, lighting and sound designers,”

Antone said she is most looking forward to seeing how the costumes she envisioned and created come together on stage.

“I think one of the most important things about the show costume-wise is the relation it has to nature,” Antone said. “I’m ready to see how their costumes play off of each other”

Throughout the show, each character continues to make decisions regarding his or her future without any hesitation, and in the process, takes the audience along to witness the consequences. Moses said he hopes those in attendance will leave the show having witnessed something that they can relate to their own lives.

“I hope the audience leaves with the understanding that everything that these characters go through, each audience member has, will, or is capable of experiencing,” Moses said.