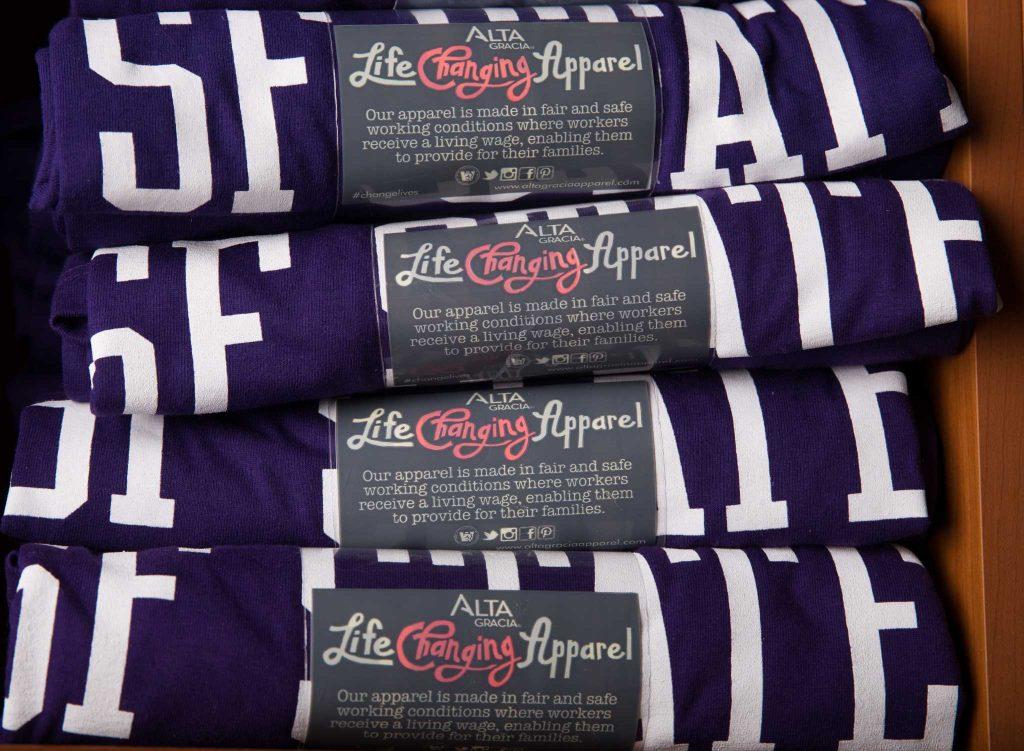 At the SF State bookstore, a rack of white hoodies and a few stacks of colorful, college-branded tops are indistinguishable from the rest of the store’s clothing, except for a small sign that reads “Life Changing Apparel.” The factory workers who made these Alta Gracia products earned a living wage.

SF State first offered Alta Gracia’s fair-trade apparel three and a half years ago, but the brand has never been a big seller, according to bookstore director Husam Erciyes.

“I don’t think a really big range of people know what it’s all about,” Erciyes said.

Alta Gracia apparel is produced at a factory in La Altagracia, a province in the Dominican Republic. The company seeks to improve living conditions for its 150 garment workers and their families by paying a living wage. That wage is three times the minimum and includes free healthcare, according to company president and CEO Donnie Hodge. SF State is one of about 350 campuses to promote the label.

“There had been a lot of conversation on campus about the conditions under which collegiate apparel was made, and also the wages,” Hodge said. “What I personally want to prove is that you can pay people a living wage, and you can sell your product at normal retail without asking (customers) to pay more, and you can still be a profitable company.”

Hodge founded Alta Gracia in 2010 as a branch of Knights Apparel, the largest supplier of university threads in the nation. He sold Knights Apparel in April 2015 and kept Alta Gracia as a stand-alone business, focusing on improving conditions in the Dominican province.

Apparel imports remain on the rise in the United States despite ongoing investigations of transnational sweatshops and tragedies like the 2013 collapse of Rana Plaza, a factory in Bangladesh that killed 1,138 workers and injured thousands more. A report released Friday by the United States Department of Commerce showed a 6.5 percent increase in apparel imports in January 2016 compared to January 2015.

“If Nike were to open a factory in Indonesia, of course everyone would try to work for Nike,” said Tjokro, who was born in Indonesia. “(These corporations) need to live up to expectations by paying standard, normal wages. Not just what they think (workers) deserve based on the location.”

Alta Gracia’s marketing materials, like the lone flyer in the bookstore, showcase photos and stories from individual workers and explain how each purchase changes lives. Connie Ulasewicz, sustainable design expert and bookstore advisory committee member, said this brand is one the campus community should stand behind.

“Ninety-nine percent of the population doesn’t think about who makes their clothing,” Ulasewicz said. “But (the workers) have a face on the website. It’s fabulous. It makes them feel proud that they’re so important, and they are important. All factory workers are important, but we tend to not see them, not hear from them. That’s why this is revolutionary.”

Many students were apathetic about the need for transparency and accountability in the garment industry due to a general lack of knowledge about present-day factory conditions.

“I usually just don’t think about it,” said Shelby Barnett, first-year broadcast and electronic communication arts student. “If I were to research it more (maybe I would).”

Onesimus Baughton, a physics and astronomy major, said he might be inclined to choose a brand that pays its workers a living wage if that were advertised, but he’s more concerned about personal aesthetic than where a product is made.

“I look for (pieces that) go with my style,” Baughton said. “I probably would support (a living-wage factory). But if it looks nice, that’s when I would get it.”

Erciyes said the bookstore is waiting on more marketing materials to promote Alta Gracia, noting that bigger signs should increase student awareness of the brand and help to improve sales. Right now, Erciyes said Champion is the biggest seller and gets the most display space.

“If you have merchandise and it continues to sell, you continue to bring more,” Erciyes said.

Ulasewicz encourages students to support Alta Gracia’s workers in the Dominican Republic by buying up available products so SF State can expand its stock.

“Buy up!” Ulasewicz said. “Make a demand for more. If people are looking for gifts, buy this – give it to people, educate people. The hope is that we can raise people’s consciousness so they do start thinking about (factory conditions) and they do start asking questions so we will get answers.”