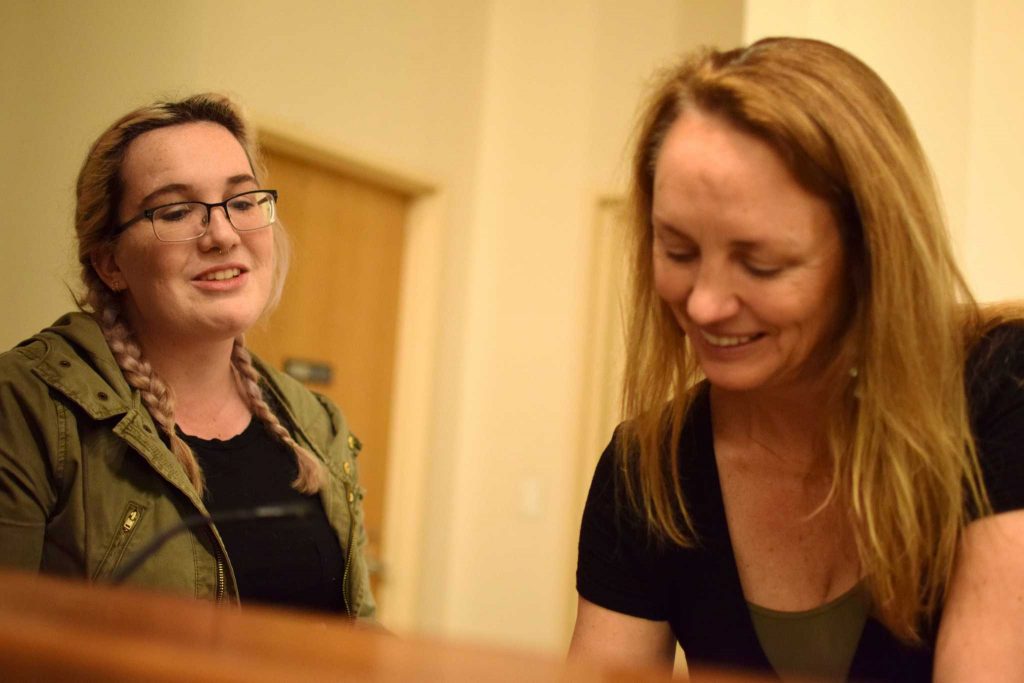 When critically acclaimed, bestselling author Jan Ellison was a student at SF State, her professor gave her a piece of advice she said she still remembers today.

“The job is not to get published,” Ellison said her professor told her. “The job is to collect one hundred rejection letters.”

The road to writing and publishing a novel is, Ellison said, ”long and winding,” and requires a lot of persistence, discipline and hard work.

Ellison touched on this Feb. 29 during an evening lecture she gave as a part of the Writers on Writing course in the Humanities Building at SF State. The course invites published authors, poets and playwrights to showcase their work. Ellison provided insight into her work and creative process, as well as good tips for aspiring authors.

Ellison’s short stories have been published in The New York Times, Writer’s Digest and The Wall Street Journal, and her debut novel, “A Small Indiscretion,” was named one of the best books of 2015 by the San Francisco Chronicle.

Ellison said SF State played a key role in her road to becoming an author.

”It was really critical in my development as a writer and on my path to publishing,” Ellison said. ”Essentially everything I have published had its beginnings in the MFA program here.”

At SF State, Ellison said she had friends who understood the process of writing. She said she also learned the value of deadlines and structure in her writing process.

”When you are out there writing on your own, if you are not in a habit of some discipline, you can be writing in a vacuum forever and never finish anything,” Ellison said.

It was also during her time at SF State that Ellison said she was encouraged by her teachers to continue writing and try to get published, even though she had never envisioned herself being a writer.

”The last thing I wanted to do was to be a writer,” Ellison said. “It is really hard, it is really lonely, and you can’t make any money.”

However, Ellison noted that she could not stay away from the profession.

“It was not because I believed in myself as a writer,” Ellison said. “I think it is important to make the distinct between belief and compulsion – and I wrote because I was compelled to write. I kept at it because I was unhappy not writing.”

When she writes, Ellison said she gets inspired by small details or experiences from her own life and feels there are always stories everywhere we turn.

Before the event, Ellison said there was a potential story idea, when she arrived to the lecture, and, by mistake, there was a note hanging on the door saying her lecture had been canceled.

”It was a very strange feeling,” Ellison said. “At first it was almost as if, unannounced to me, my existence had been canceled. And that gives me an idea for maybe a fantastical short story about someone whose existence has been erased without her knowing it.”

Farah Amezcua, a 23-year-old Master of Fine Arts student, said she noticed and appreciated Ellison’s honesty about her work process and how she lets herself be inspired by everyday incidents.

”She was very personable and talked a lot about her process and the story of her book, so it was very different,” Amezcua said. “But it was very compelling at the same time. Compelling, because it is not very often that you hear so much from an author.”

Writers on Writing professor Dodie Bellamy taught Ellison when she was a student at SF State, and remembers her for her persistence and dedication toward writing. She said she liked how Ellison talked openly about getting inspired by little episodes from her everyday life when she writes.

“She has a really wonderful attention to detail and a lyricism to her writing,” Bellamy said. “And her incredible persistence that she was talking about, in terms of submitting and publishing. She did not just send something in once, and then let a letter stop her. She just kept going.”