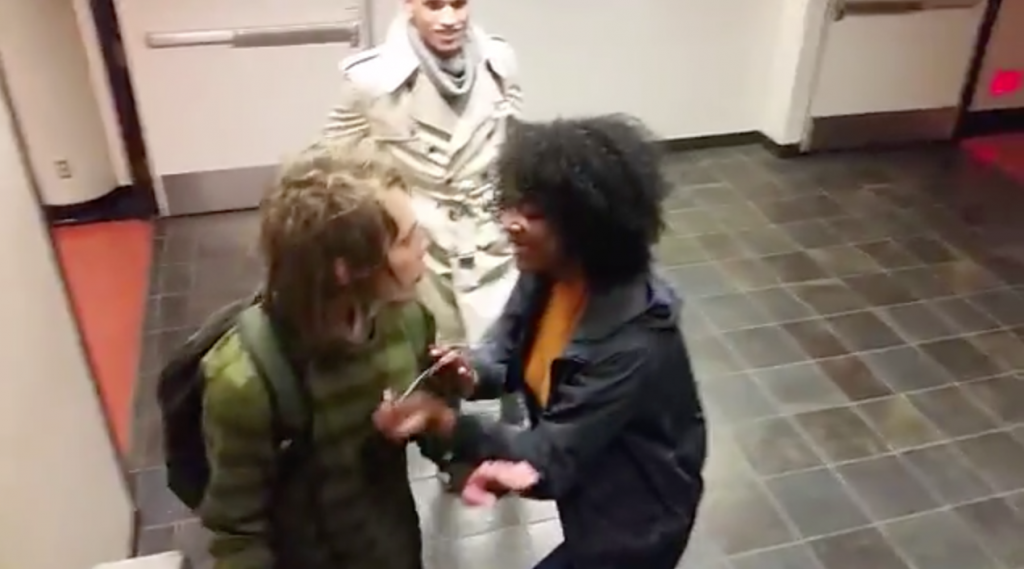 Around 4 p.m. in the SF State Student Center, Associated Students, Inc. intern and photography major Bonita Tindle allegedly assaulted environmental science major Cory Goldstein because of his hairstyle and race, according to a report by the SF State University Police Department.

Tindle followed him down two flights of stairs and threatened to cut his hair off with scissors, according to Goldstein.

“Someone within an activist group thought that she could attack me based on my locs and that’s not okay – it’s not even a part of the colored community’s culture,” Goldstein said. “I felt that I didn’t

need to explain myself. My hair, my rules, my body.”

Maddy Grey, a communications major at SF State, said she witnessed the incident and the video was taken halfway through the exchange. Grey posted about what led up to the recorded incident to her Facebook account on Tuesday, saying, “He called her a bitch after she tried to give him a flyer so she went to talk to him about his dreads and not to call her a bitch (naturally).”

Goldstein said this was the first time anyone had expressed negative views about his hairstyle and he sees dreadlocks as not solely the domain of Rastafarian or African culture.

The video, titled “SFSU 2016 – Campus employee assaults white student for ‘cultural appropriation’” had more than 260,000 views on YouTube at press time and was trending on Facebook Tuesday afternoon.

Jonathan Morales, director of news and new media at SF State, said Tindle is not employed by SF State and that the University and ASI have separate contacts and a separate board of directors.

“We are taking the matter seriously and will promptly and thoroughly investigate this incident through applicable University channels, including our campus student conduct procedures,” Morales said in a statement issued Tuesday.

“I do see it as cultural appropriation,” said Taylor Hunter, a psychology major who identifies as African American. “We are all so culturally intertwined this day and age, we are always borrowing from different cultures. But you need to know where you got it from and you need to be respectful of the people that created it for you.”

“For me, I don’t care if someone has dreads or has straight hair: I think everyone has freedom to do whatever they want,” said philosophy major Asha Hassan. “There is nothing wrong with him having dreads. I feel like she was in the wrong because you can’t tell someone how to live their lives or what to do to their hair.”

Goldstein declined to press charges, although he said the campus police considered the incident battery and a hate crime.

“I really am hoping that the campus is able to fully resolve this issue without any more issues basically,” Goldstein said. “I don’t feel that me getting attacked should cause more of an attack.”

Xpress was unable to reach Bonita Tindle for comment as of the posting of this article.

UPDATE: The video interview of Cory Goldstein was updated with a new video that corrected the error where part of the audio cut out. The new video features the audio that was previously muted.

UPDATE: The Golden Gate Xpress has been trying to reach out to Bonita Tindle since the video went viral on Tuesday. We are actively seeking communication with her and look forward to interviewing her and learning her side of the story.