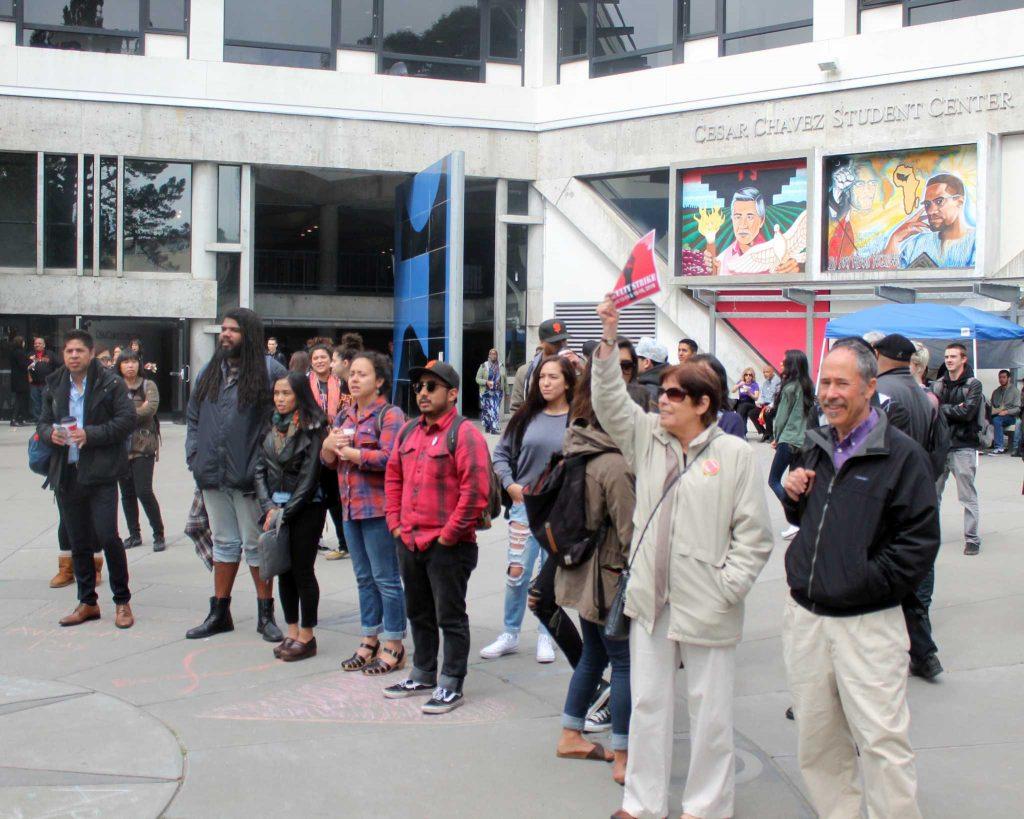 A jury of SF State students and faculty unanimously found Chancellor Timothy P. White guilty on all charges of his crimes against the California State University system during a mock trial  Wednesday at Malcolm X Plaza.

The trial, which was hosted by SF State California Faculty Association President Sheila Tully, came on the heels of a fact-finding report released Monday that sided with the union.

“(The fact finder) was 100 percent in favor with faculty, and is recommending a 5 percent salary increase,” Tully announced before the trial, drawing cheers from the small but eager crowd that lined up in the plaza.

“I just want to get the facts and find out where they’re at,” history major Maria Romero said. “I work for the school, so I feel their pain.”

Tully also announced a supposed change to White’s statewide tour. White is currently doing a listening tour where he visits all 23 CSU campuses throughout the state to listen to community concerns, and has been met with open opposition from students and faculty in attendance. According to Tully, White was previously scheduled to come to SF State on April 5, but after reviewing his calendar she discovered the date had been changed to “TBD.”

“We did not invite White to this trial,” CFA organizer Jenna Haywood said. “However, he’s supposed to meet with us April 5 and it looks like he cancelled that meeting.”

After Tully explained that the strike would proceed unless White met the CFA’s demands by midnight April 13, Asian American studies professor Daniel Gonzales, playing the role of the judge, started the trial. Gonzales, who was dressed in full judge regalia, complete with a powdered wig and a comically oversized gavel, listed off the many crimes White was charged with, including maintaining unfair hiring practices and workload distribution, creating a lack of affordable and accessible education for students, and replacing permanent tenure jobs with low-paying lecturer positions.

Two members of the CFA and two SF State students took the stage to testify against White, who was represented by a cardboard cut-out version of him.

“Class enrollment is up by 24 percent, but faculty (hired) is only up by 14 percent,” biology major Daniel Alvarez said. “Finding classes I need is difficult, class sizes are getting bigger, and the waiting lists are huge.”

Throughout the testifying process, the students emphasized their solidarity with the faculty.

“My professors are working within their means to make everything possible for students, and it is not their fault that we’re all struggling,” Latina/Latino studies major Kari Banuelos said. “I am (still able to learn) but I have to constantly choose between my academic and my mental health, and that is what I and a lot of students are struggling with.”

A strong theme of respect dominated all of the speeches given by faculty and students, who criticized White for failing to do his job and provide adequate pay and working conditions for his employees.

“Show your respect for faculty and students,” CFA organizer Mario Fernandez said. “It’s a form of cowardice and ineffective leadership for him to not show up to the prearranged tours he’s supposed to be doing, especially here at SF State.”

While the CFA members hosting the trial still stand behind their slogan of “I don’t want to strike but I will,” many were heartened by the crowd that came and were committed to continuing with the strike as planned.

“(White) can settle this today, and give us what the fact finder is recommending,” Tully said. “At midnight on April 13, the game is on. We’re on strike.”

Xpress reached out to White, who was unavailable for comment.