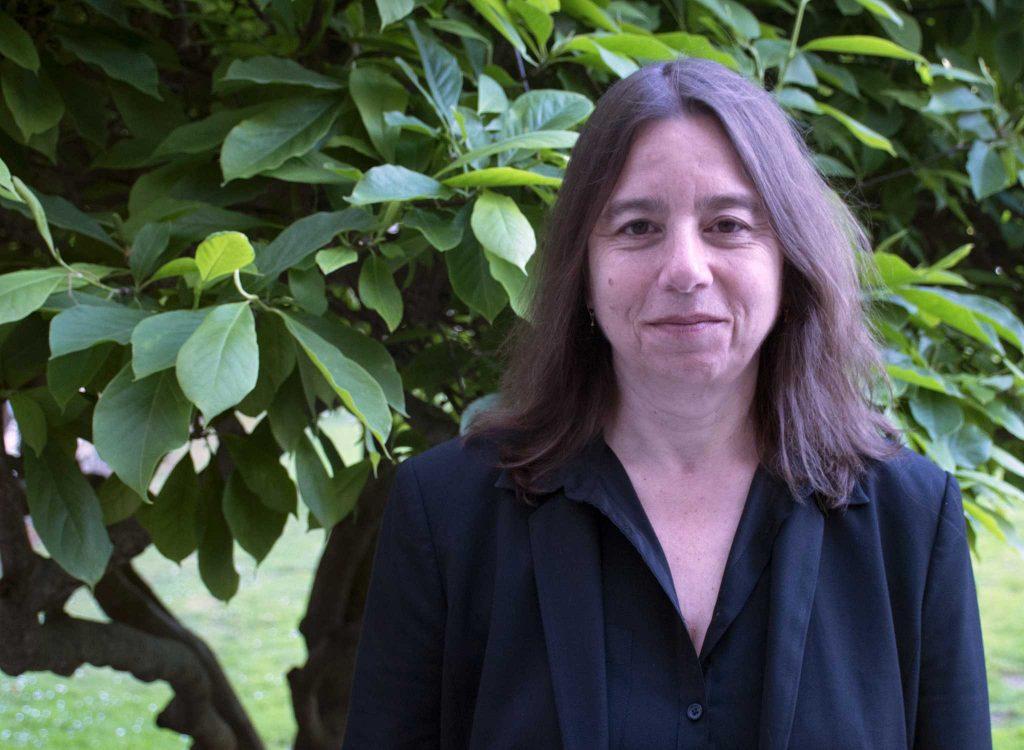 Author Sarah Schulman, a major writer in the LGBT community, poses for a portrait on Monday March 4, 2016. (Connor Hunt/ Xpress)

Sarah Schulman was six years old when she first started putting pen to paper, and has not stopped writing since.

At first it was a portrait of the history of baseball that she wrote without any sources and out of free imagination and plays that she made her siblings act out.

”Writing is very easy for me, and I consider myself to be a natural,” Schulman said. “When you see somebody who is an improv piano player, they sit down and they just start playing. That is like me at the keyboard.”

Schulman spoke at the Writers on Writing event, Monday at SF State and will visit The Poetry Center Thursday, April 30, to talk about her writing process, her new novel “The Cosmopolitans” and what occupies her in life. She is also a documentarist, a gay rights activist and a playwright, for which she has been awarded a Guggenheim Award.

Even though her authorship stretches over a wide range of genres, a commonality in many of Schulman’s stories is minorities and people from other demographic groups than her own.

“In my first novel I had an Asian, lesbian character,” Schulman said. “I wrote books from the point of view of people with HIV. I have always had black characters. This is something I have been interested in from the beginning.”

Steve Dickinson, director of the Poetry Center who invited Schulman to come speak on Thursday calls her a ”prominent novelist,” and a ”very influential writer.”

“Sarah is one of the most intelligent authors,” Dickinson said. “She is really brilliant at thinking about the urban environment and the life of gay and lesbian individuals. And she has been an activist and very much engaged in thinking about it and depicting and writing this new literature that has really come into flourishing in the past half century.”

Long-time friend, co-writer and literary professor, Dodie Bellamy, who teaches at SF State and invited Schulman to speak this past Monday, describes her as an “adventurous writer,” because of her ability to explore themes.

“From the beginning she was writing about lesbian content, which now we see so much of, that we kind of take it for granted,” Bellamy said.  “But that has been a struggle, it was a choice to do that. She has also been very much involved with the politics of AIDS and HIV, and then she writes about very difficult topics in general.  She does not shy away from anything, she really stays true to herself. I admire that.”

Schulman herself describes her writings as inspired by “her own and other peoples’ contradictions and the social dynamics that they produce.”

”Why people are afraid or cruel, why change is so difficult and then the joy that occurs when people take chances and trust each other,” Schulman said. “How transformative that is – not just for individuals but for the whole community.”

She said she does not believe in villains or heroes in life or in her writing, but instead that ”people are a lot more complicated than we are allowed to say.”

However, she said she does believe in the importance of reversals – an unexpected change in direction, both in writing and life.

Author Sarah Schulman, a major writer in the LGBT community, poses for a portrait on Monday March 4, 2016. (Connor Hunt/ Xpress)

”Surprises are very important,” Schulman said. “I am not religious so I believe that we only have one life, and heaven and hell take place on earth, and wasted potential is the tragedy of human existence. So we have to take those chances.”

Her newest novel, “The Cosmopolitans,” is about neighbors and odd duo Earl and Bette, who – as described by Schulman – are “a guy dealing with homophobia and his ethnicity” and a ”queer spinster”. The story is set in New York in the late 1950s in the building where Schulman herself grew up. That setting and time is no coincidence.

It was a time where the city was cheap to move to, Schulman argues.

Schulman, who calls these “refugees from uncomprehending backgrounds,” believes they are very important to society because they create new ideas.

She said she is sad to experience that cities like New York City and San Francisco today have become so expensive and homogenous to live in that they in a sense push this kind of people out of the city.

Alongside being an author, she works full-time as a professor in creative arts at the City University of New York, where she teaches young aspiring authors.

If she were to give a simple writing advice, it would be that if you write a paragraph a day, it will end up being a novel.

“It does not have to be good until the seventh draft,” Schulman said. “So the first sixth drafts can be really horrible. So don’t say: I have been working on it for five minutes, it is terrible. Wait five years before you say that.”