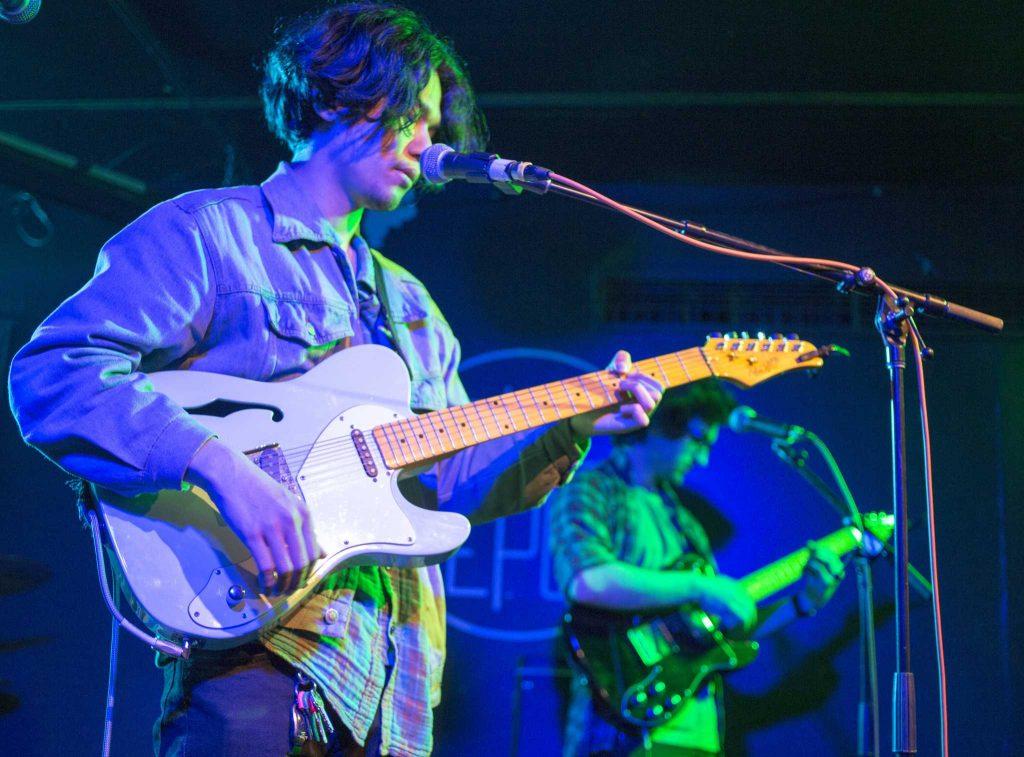 Faux Foe Fox guitarist and vocalist Leslie Ngo, and guitarist Nicholas Hoffman perform during the battle of the bands contest in The Depot at SF State on Tuesday April 12, 2016. (Ryan Zaragoza / Xpress).

Long lines stretched out to North State Drive. The crowd was dancing and cheering as the multicolored LED lights shimmered on the walls and stage. A giant banner read, “Rhythms Music Festival” as the 2016 “Battle of the Bands” winner Faux Foe Fox emerged from a veil of smoke to open for headliner Kehlani.

By winning the 2016 Battle of the Bands, Faux Foe Fox was awarded an opening act for Kehlani’s concert, where they performed three of their original songs: “Ball and Chains,” “Slow” and “Shook.”

“I really liked their performance,” said Sara Walker, a second-year kinesiology major. “It was nice to hear a different type of music than the headliner. Their sound really went well with the dim lights.”

Faux Foe Fox is a four-person math rock band, which is a genre of music that is a style of experimental rock and indie rock.

“We play a very funny genre called math rock,” Ngo said, chuckling. “And not many people out here (in San Francisco) play that kind of music and we all had that common ground, so we were like, ‘Oh wow!’ To meet a math rock musician at SF State, lets try this out.”

Battle of the Bands was one of the five events that took place during the weeklong “Rhythms Music Festival” April 11-15.

To apply for the competition, each band submitted tracks to the event organizers, and then five bands were selected to compete based on their sound quality, according to Horace Montgomery, the Associated Students, Inc. director of programs and services.

Faux Foe Fox didn’t have any SoundCloud tracks or a playlist to submit, so their application was approved based on phone footage of live performances.

“In terms of our application for Battle of the Bands, we didn’t have to play for anyone,” Hoffman said. “We submitted some YouTube videos we had of friends who shot a video of a house party we threw at Leslie’s house. That was the only recording of (our) music we had.”

The competition originally featured five bands, until one dropped out the day of the event. The remaining four included 3rd & Army, White Skies, My Evergreen Soul and Faux Foe Fox.

“What’s on my mind when I’m playing is making sure that the audience is having a good time,” Hughart said. “If they’re dancing and jamming out, then we’re having a better time too and it makes our music a lot easier to play.”

White Skies and 3rd & Army advanced along with Faux Foe Fox, who won $500 in prize money and the privilege of opening for Kehlani.

“I think it was a little weird playing with friends because we have homies in White Skies,” Ngo said. “We just have never been placed in a situation where we are competing with our music. But it all ended up real cool. We bonded over the experience and they did absolutely a great job.”