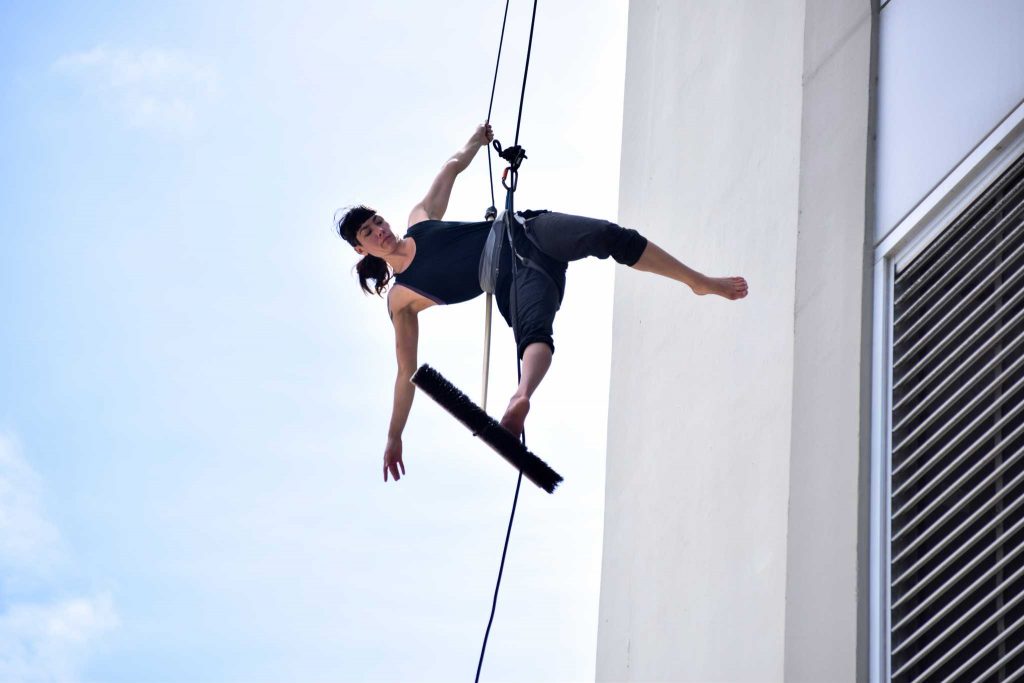 Alayna Stroud practices for the upcoming show, "Archives and Outcries: California's Unconventional Women Tell Their Stories", an aerial dance performance by Flyaway Productions. The show will be held on May 3, 2016 outside the J. Paul Leonard Library. (Eric Chan / Xpress)

Students stopped in their tracks, eyes fixated upward on the harnessed dancers cascading down the outside of J. Paul Leonard Library. The dancers moved as one with vintage dresses as they practiced for the upcoming performance titled, “Archives and Outcries: California’s Unconventional Women Tell their Stories,” expressing women’s journey in the workforce.

The performance, celebrating the 30th anniversary of the Labor Archives and Research Center, will take place Tuesday, May 3 at 2:15 p.m., 3:30 p.m. and then again at 5:45 p.m. The dance company, Flyaway Productions, was commissioned by the LARC to create a site-specific performance, choreographed by Jo Kreiter, to promote the archives being housed in the library.

“A lot of people on campus just didn’t know we were here – we thought, ‘We want to be visible; we want people to know we’re here,’” said Catherine Powell, director of the LARC. “That’s why we’re doing this – we wanted it to be big and for the campus to see us.”

According to Powell, Kreiter’s work focuses on women’s rights and social justice through the lens of dance. After sorting through the archives, the two decided the theme should be gender roles in the workplace.

“This led us to focus on women’s historic experience of working in male-dominated fields; to women working in the trades; and to women on the picket lines who have fought for better work standards for both women and men,” Kreiter said.

The dance will be set to music featuring several oral histories from women breaking gender roles in the workplace. One of the dancers, MaryStarr Hope, said the dance will be broken up into three sections. It opens with choreography about women trying to break into the job market, then moves to the second section covering the topic of women being confined to menial work, despite their qualifications, and the third portrays women working in the garment industry.

“My feeling is more about what these women have to say,” Hope said. “I’m 39, and in my life I remember how hard it was for women, for working parents, for divorced women, to have to try to go to work. I think this is an opportunity for young people to understand what a big deal it is that we’re in a situation today where women have so many more opportunities that they didn’t have before.”

The celebration will continue with an evening program featuring keynote speaker Myra Strober of Stanford University, who will discuss her upcoming publication, “Sharing the Work: What My Family and Career taught Me about Breaking Through (and Holding the Door Open for Others).”

“We do have a sort of traditional component for the program every year,” Powell said. “We have a guest speaker come and talk about some aspect of labor history, and we always have a cultural component.”

According to Powell, the LARC was created as a collaborative effort between the labor community and SF State, in recognition that the Bay Area has always had very strong labor movements, with the first recorded strike being in 1849 during the Gold Rush. Concerned that that history might be lost, the LARC opened its doors in 1986.

“The role of the archives is to both preserve and promote labor history in the Bay Area,” Powell said. “The promote part is really about letting people know about the history and the collections.”

While the purpose of the performance is to promote the archives in the library, Kreiter noted that there is still work to be done as far as women’s labor rights.

“If the problem were solved, we wouldn’t need to do this dance,” Kreiter said.