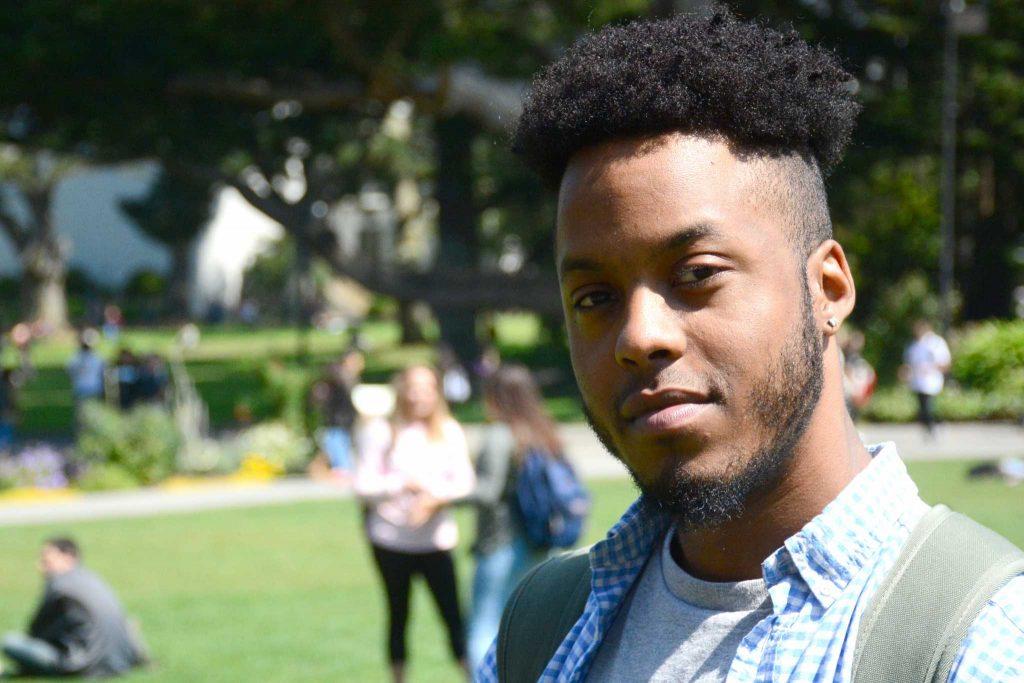 Timothy Walker, the only student on the Racial and Identity Profiling Advisory Board, poses for a portrait in the quad at SF State on Tuesday, September 6, 2016.

Timothy Walker, a 19-year-old SF State political science major, is the youngest member and only college student to be appointed to California’s newly established Racial and Identity Profiling Advisory Board.

Walker and the rest of the board will study collect data to help identify where racial and identity profiling stem from. Walker, alongside the board, will suggest solutions to prevent any type of prejudice within law enforcement, like implicit bias training for officers and conversation recording when pulling over citizens.

“The main thing we do is come up with recommendations to give to law enforcement on how they can use data, track data, how that data can be transparent and allow community members to see that data and see who is being targeted and who is not,” said Walker.

Walker was appointed by California Attorney General Kamala D. Harris to fill the position required for a representative between 16 and 24 years of age.

“When I met Timothy Walker, I was moved by his story and inspired by his commitment to serve as an agent of change to make California a more fair and compassionate place for all of us,” Harris said in an email. “This critical conversation is unfolding here in California and across the nation, and as a powerful young man who has witnessed the sting of profiling firsthand, Timothy is one of the leaders at the forefront.”

Walker works alongside leaders in education and religion, civil rights activists, teachers and professors and police officers to eliminate racial and identity profiling in law enforcement.

“Timothy is a natural leader and passionate advocate for justice,” said Alex Johnson, a member of the Racial and Identity Profiling Advisory board and the executive director for California’s Children’s Defense Fund. “He brings a unique perspective to the board and a strong desire to improve the quality of life for his community.”

Walker’s passion for social justice began when growing up in South Central, Los Angeles where he joined an after-school program called the Community Coalition. The coalition sparked his interest in enacting change and allowed him to get involved in social work on his campus and within his community.

“I didn’t really like it at first,” Walker chuckled. “I was the type of person that thought, ‘the way things are, that’s just how it is, and you can’t really change anything.’”

After spending four years in the program with opportunities to take the lead on campaigns to better education and his community, he wanted to continue to work toward positive change. When Attorney General Kamala D. Harris visited a meeting at the Community Coalition to discuss racial injustice, Walker stood out by speaking up about his personal experiences with racial profiling.

“The culture of the meeting was passive,” said Walker. “And that was a time where everyone was frustrated with police tension in my community. I knew I had to speak up,” Walker said as he pounded his hand on the table.

“It was very emotional, and I think she could tell that was something I was serious about and I would be honored to serve on the board and I would do it the right way, Walker said.

The Community Coalition brought Walker and his colleagues on annual Bay Area college campus tours, where he said he fell in love with SF State and the City for its social-justice oriented and progressive culture. Other than studying political science, Walker is involved with the Black Student Union on campus.

“Being appointed to the racial profiling advisory board is just a mere example of his potential,” said Ismail Muhammad, President of the Black Student Union. “The energy he brings to BSU is great, similar to any revolutionary such as Kwame Toure or even Huey Newton.”

Walker’s long-term goal is to become mayor of Los Angeles but says he will be satisfied as long as he finds a way to go back to his community and make a change.

Walker explained a message he has for the world with more poise and conviction than the majority of 19-year-olds:

“No matter what you’re doing in your life, whether or not it’s big in other people’s eyes, continue to do that and create change that way. Along the spectrum of whatever it is continue to do that and always feel proud about whatever it is. Like if you’re driving a bus, keep driving the bus, make sure that the people you drive are safe and continue doing what you’re doing. It creates change in a way that you might not see,” Walker said.