Poetry center kicks off first event of the semester 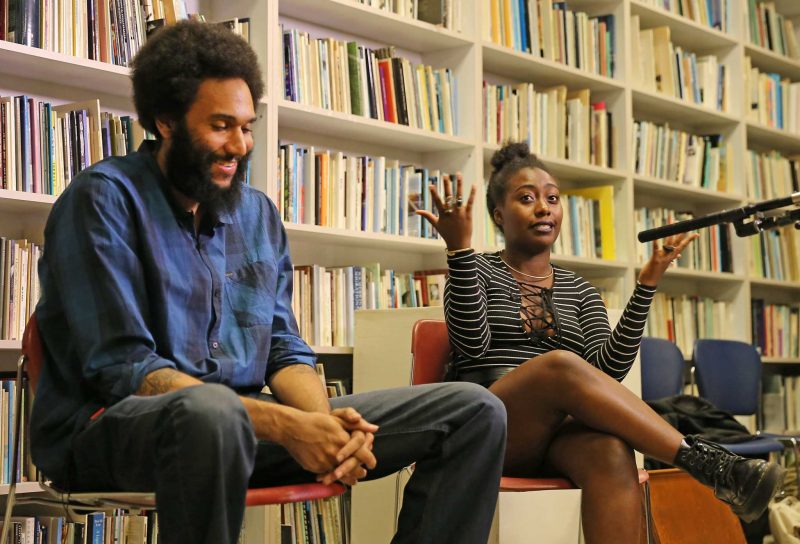 Tongo Eisen-Martin’s powerful voice captivated students and faculty Thursday Night at the poetry center’s first event of the semester. Attentive faces listened and nodded along to his expressions of life, love and frustrations against an unjust criminal justice system.

“One of my goals in programming poets for the poetry center is to bring to the school what the school doesn’t have,” said Steve Dickison, director of the poetry center at SF State. “I’m not so interested in presenting people just because they’re well known. These two people are activists and are aware of what’s going on in the world at this time.”

In 2015, Eisen-Martin released his book of poetry, “Someone’s Dead Already.” His poem “We Charge Genocide Again” lists the names of Black people who have been killed by police. Their names are placed directly between the words “28 hours,” a reference to a study by Operation Ghetto Storm that found that every 28 hours a Black person is killed by police in the U.S.

Eisen-Martin describes his poetry as “a dance between observing reality and the grooming of its presentation.”

“Why do we get quiet when we experience good art? Why do we go into a trance? Because our discoursed thoughts get put on hold,” Eisen-Martin said. “It’s an expanding experience. An experience that can’t be duplicated.”

Jasmine Gibson, the second featured poet of the evening, described her poetry as either “American gothic or riot erotica.” Her book of poetry “Draptemonia” was named after a psychiatric disorder given to runaway slaves.

“For a slave to want to run away there had to be something mentally wrong with them,” Gibson explained.

Gibson said her time spent working as a case manager in a mental health facility was an influence of her poetry.

“When you work in that kind of environment, you definitely see how there’s a different way of interpreting reality,” Gibson said.

Steve Weber, an attendee of the event and creative writing major, was impacted by the poetry he heard from the speakers.

“I thought it was really powerful and that they showed a lot of heart,” Weber said. “I bought Tongo’s book.”

During the Q&A session, Eisen-Martin gave some advice on his writing process and emphasized “the art of noticing poetry in life.”

He had some advice for aspiring writers: “keep that conversation running with yourself. Whatever you do to get to an image, that should eventually become a parlor trick.”

Both Eisen-Martin and Gibson were excited to share their work with SF State.

“(I get to) hear how my own internal thoughts affect other people.” Gibson said. “The best part is that other people get something out of it.”

The poetry center offers free readings from featured writers. More information can be found at http://poetry.sfsu.edu/.