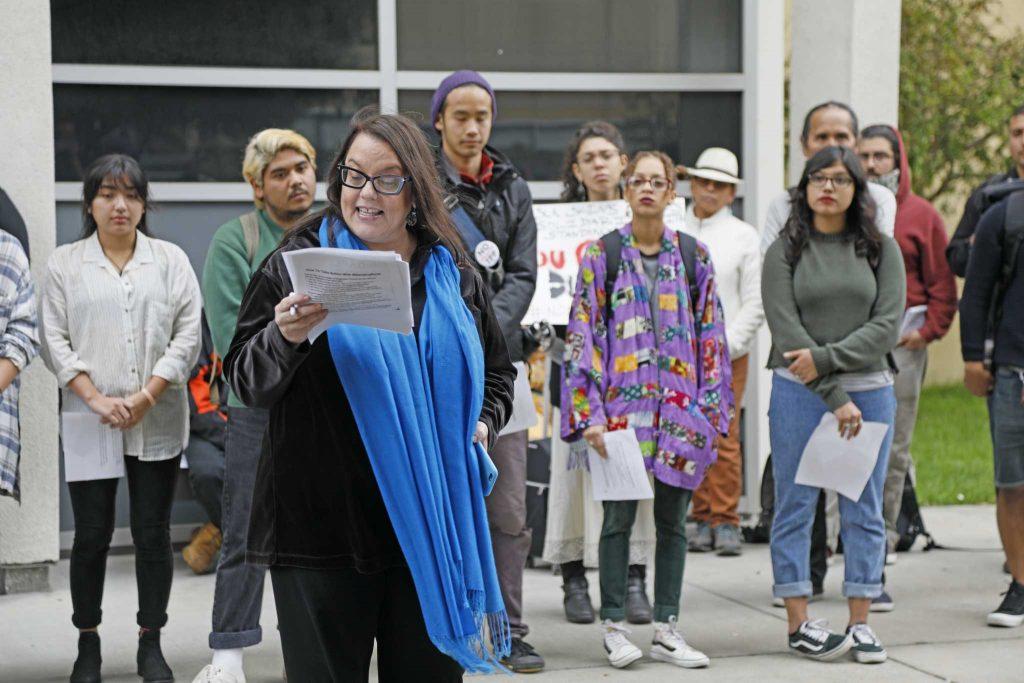 Joanne Barker, a member of the Lenape Nation and an American Indian studies professor begins the teach-in of the North Dakota Access Pipeline in front of the Ethnic Studies and Psychology buildings on Thursday, Sept. 15, 2016. Barker began with an introduction about the harm of polluted water resources and climate change. (Steven Ho/Xpress)

Students, faculty, and community members gathered for a solidarity teach-in, in support of the Standing Rock Sioux Tribe on Thursday.

The tribe has been protesting against the construction of the North Dakota pipeline for several months because it jeopardizes access to clean drinking water and encroaches on their sacred lands.

“We are Standing Rock. Everyone here is Standing Rock because this is happening here in California,” said April McGill, a 2009 American Indian studies graduate and member of the Pomo and Wappo tribes. Along with a number of other speakers, McGill spoke about the scarcity of the salmon population in the native culture and the damage that dwindling water resources will have on them both in California and North Dakota.

McGill’s travelled to North Dakota in support of their protest of the pipeline construction in support of her son’s identity as a member of the Standing Rock Sioux.

L. Frank of the Tongva tribe and an activist who called in to the teaching from the camp at the pipeline directly said there has been a lot of miscommunication with the media’s coverage of the protests.

“We don’t want violence of perceived violence to be what’s on the media,” Frank said.

Joanne Barker, a member of the Lenape Nation and an American Indian studies professor, helped to organize the event. She began the teach-in with an introduction about the harm of polluted water resources and climate change.

“I knew the media was distorting the events but to hear about the kids, the prayers, and all the activities was really moving” Barker said.

Barker said having people who have experienced the protest was something she was able to learn from the teaching.

Although the Obama Administration has temporarily put a halt on construction of the pipeline until it can complete more environmental assessments, the protests continue until there is a guarantee that there will not be any more building of the pipeline.

Amanda White Crane, an American Indian Studies alumni spoke about the solidarity felt between herself as a Northern Cheyenne and the Standing Rock Sioux. She felt there was a disconnect between where she grew up in Montana and the original land her people once lived in. But she found that there is a sense of companionship between all the tribes when they come together in support of each other.

“In that land that we bulldoze through are my ancestors too,” White Crane said.

White Crane said that people are now realizing the truth that Native Americans have known all this time.

“When we don’t take care of the earth, we don’t have any existence”