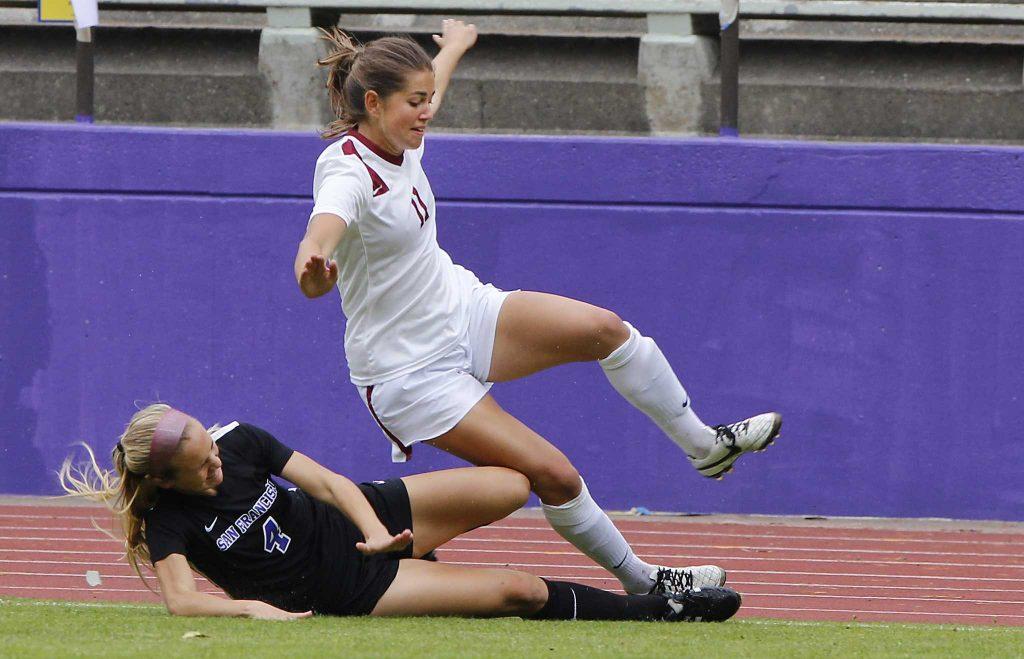 Her coach describes her as dynamic. Her teammates describe her as a leader. She describes herself as a hard worker.

Autumn Fox is a senior forward for the SF State women’s soccer team. Over the course of her four-and-a-half-year experience on campus, she has seen the program make some big changes and grow.

“It has definitely been an interesting transition from four years ago playing for Jack (Hyde) and Robin (Hart) and now for two years with (coaches) Tracy (Hamm) and Val (Henderson),” Fox said. “I feel I really learned a lot. I’ve been able to see the program grow and develop into something entirely new it’s been really cool and exciting.”

“Jack did a lot for the program and got us where we are now but it was nice to get fresh ideas,” Fox said.  “I’m excited to come back later to see how far the program grows.”

Now in her senior season, Fox improved her fitness by running all summer and playing in the Women’s Premier Soccer League. The WPSL is a 100-plus team national pro-am and is the largest women’s soccer league in the world, according to its website.  The league includes several Division I women’s athletes. Fox attributes a lot of her experience and preparation from playing in the league.

“I would go out to the track every day, then I would work on my composure with the ball,” Fox said. “I think that if I was to compare myself three years ago to now, my mindset has changed. I really have learned to not always go 100 mph but use my speed to my benefit and play smarter.”

Fox’s soccer journey began early, she first started playing soccer at the age of four, and she attributes her hard work ethic to the love of the sport.

“I think soccer is a beautiful game I love competing,” Fox said. “It is the most rewarding feeling to score a goal and win games.”

Fox’s work ethic is what her teammates and coach respect most about her and they also look to her as a voice of leadership and perspective.

“She’s such a great leader. She is a person everyone on the team knows they can go to if they ever need anything,” said senior midfielder Paige Yeider. “Not only is she vocal but she shows it on the field no one works harder than her. She is always giving it her all.”

Fox led SF State in total points last season with 10 and is off to a good start this season with three points in the team’s first four games.

“Autumn is a great leader she has such a positive attitude,” Hamm said. “She’s unstoppable. I think she prides herself on her work ethic and she should. She wants to win games and works really hard. She’s a great person.”

“I try to help my teammates by giving them perspective because I know it’s not easy for freshman to transition into college so I just try to give them confidence,” Fox said. “I tell them work hard and give it time because it won’t always work immediately.”

With this being Fox’s last collegiate season, she is preparing for life after soccer. She plans on taking time off to travel and see what life is like without soccer, then ultimately go to graduate school for sports performance psychology to work with athletes one day.
“I think giving myself an opportunity to explore other areas in life would be great,” Fox said. “Who knows I may coach one day.”