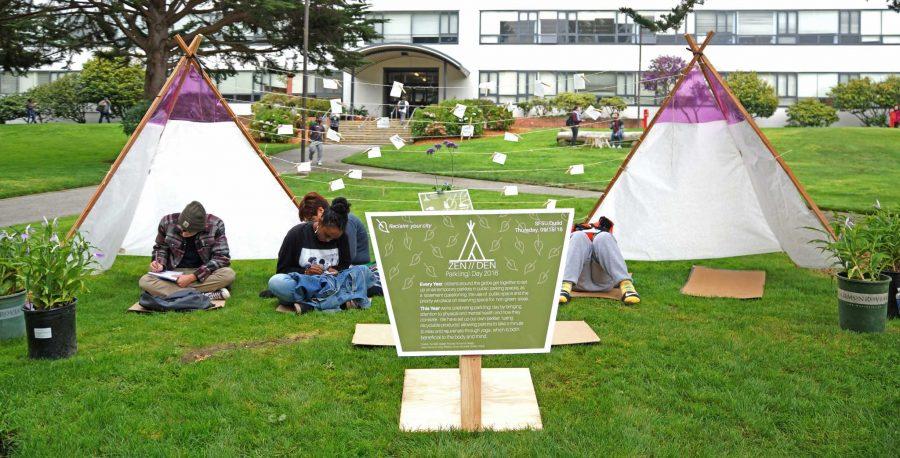 PARK(ing) Day is a worldwide annual event where artists, designers, architects, and many other volunteers transform metered parking spaces into temporary art installations and green space. With the help of Sustainable SF State, the University has been apart of this tradition since 2006, according to DAI 300 Design Process Professor Ricardo Gomes.

All recycled materials were used for each group because it was an important part of the PARK(ing) Day message. A primary goal of the event was to raise environmental awareness through multiple themes that were created by Sustainable SF State. Each group was assigned one theme and given the task to come up with a compelling way to get the message across.

One of these groups was Farm to Fork. Their station included cut-out pieces of fruit and vegetables for photo ops and a picnic area so people could sit and enjoy food from the Associated Students, Inc. Farmer’s Market. The main entertainment was Little Papa, a dancing yorkie dressed in a hotdog costume.

Another big hit of the day was the Zen Den in the quad. Originally scheduled until noon, the art installation stayed up a bit longer because of its popularity. This particular installation addressed physical and mental health.

“When people think of health, a lot of times they don’t include mental health and that’s what we wanted to focus on,” said Cody Peilatiro, group member of the Zen Den and visual communications design major.

The group provided a space for students and passersby to relax, listen to music, and do yoga. Rows of string where participants pinned up personal notes were held up by two teepees that the group made.

Other morning groups included The Bike is Right, who promoted bike culture and limiting the dependence on cars through their own version of the game show The Price is Right. The group convinced passers-by to join in on the fun with the promise of coffee and a sticker of Bob Barker as the Gator mascot. The Reclaiming Green Space group provided an outdoor area for people to sit and pinned where each participant was from on a large map.

By 2 p.m., the second section of the Design Process class began setting up their installations. These groups included Farm to Cup, Enviro Carnival and Enviro Twister. One installation had a student built teeter totter made from an old tire and a large wooden pallette.

Sustainable SF State was one of the many organizations that helped make PARK(ing) Day happen. Nick Kordesch, the sustainability specialist for SF State, said there’s a lot that is involved in preparing for the event.

“We spoke to the class and gave them background about parking day,” said Kordesch. “We try and teach them why we care about greener transportation and give examples of previous parking days for reference.”

The teaching is also a two-way street, as the students teach Kordesch and his colleagues a few things about art and design.

“It was amazing to see them brainstorm their ideas. It was like a design jam session,” Kordesch said.

The brainstorming session that he mentions is known as a Charrette. Professor Gomes and the architectural firm WRNS, who also is involved with the development of the Mashouf Wellness Center, help facilitate the students in the intensive process.

“The students come up with an idea and try to visualize and realize that idea in a very intense way,” said Gomes. “So essentially they had to come up with the idea and the solution within a two-hour time span.”
The brainstorming, planning and consuming preparation paid off for the students of DAI 300.

“Seeing the final outcome of everything we’ve worked on is what makes it fun,” said visual design student Melissa Herold, who was a part of the Reclaiming Green Space group. “That’s the best part.”