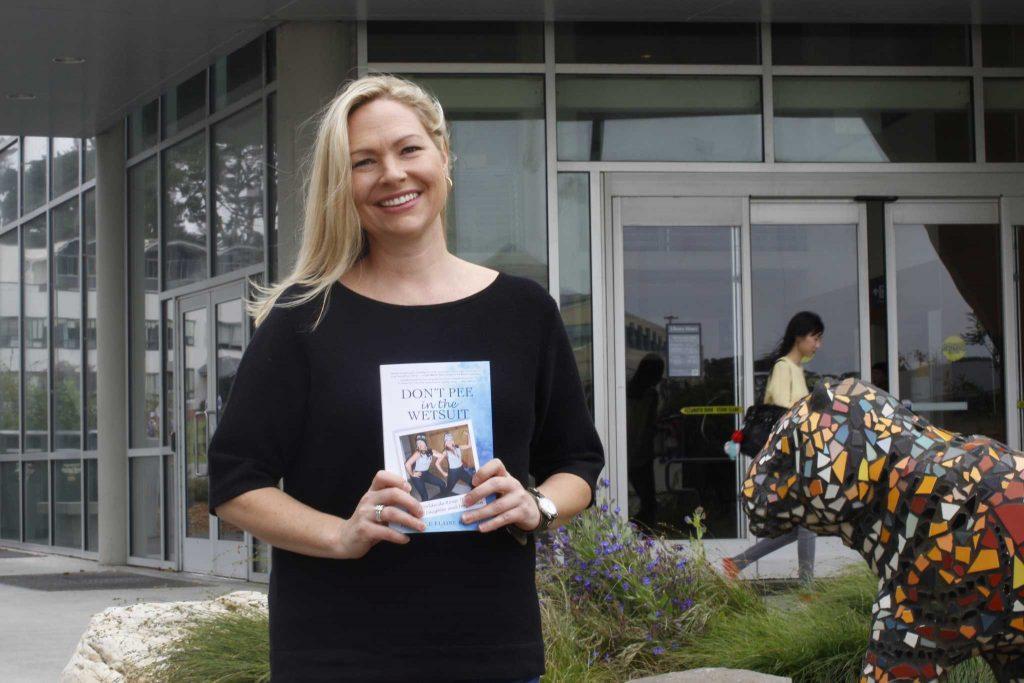 Author Michelle Kennedy poses with her book outside the library on Thursday, Sept. 8, 2016.

For Michelle Kennedy, a young reporter working for a Sacramento news station in 2000, covering death was part of the job. However, when she was sent out to cover a multi-car pileup on Interstate 5, she was shocked to discover that her father was one of the crash fatalities.

Out this sudden loss came the broadcast and electronic communication arts lecturer’s recently published book, “Don’t Pee in the Wetsuit: A Worldwide Romp Through Grief and Happiness.”

The nonfiction paperback explores the author’s struggle to cope with grief while traveling on a six-month journey around the world.  In late 2009, she left her job at Kron 4 and took a break from school at SF State to travel and deal with her father’s death. She started writing the book while her and her friend traveled throughout 11 different countries including Costa Rica, Ireland, Scotland, Spain, Portugal, Italy, Croatia, Australia, New Zealand, Indonesia and Thailand.

“My biggest inspiration to write this book was to feel better. I had all these feelings— a lot of anger and sadness and the most comfortable way for me to express those feelings is through writing. As I went through the process I started to feel better and it helped me face my emotions,” she said.

Kennedy, who published the book herself just before the start of the semester, said she finally felt ready to publish it after eight years of crafting her writing skill through writing groups, coaches and week-long seminars.

“I still look at it and think, ‘Oh I can add this here’ or ‘There is a mistake there.’ Perfectionism can limit you on when to publish, but I finally felt ready around six months ago,” Kennedy said.

While her target audience is women from ages 20-60, she said hopes it will help people of all ages and walks of life to deal with grief and mourning.

“Some people will look at this book and say, ‘I’d like to deal with grief on a six month trip, but I can’t do that.’ I think it is all about facing that grief in whatever way you can,” Kennedy said.

“We may never get over the death of a loved one, but we can learn how to live with that pain in a healthy way,” said Diane Harris, a psychology professor at SF State.

According to Kennedy, when she started to write she felt more “joy and clarity.” However it did seem initially scary knowing that the details of her life were to be published in a book.

“It was scary, because it does make you vulnerable having all of your guts and insecurities right on the page,” Kennedy said. “Having compassion for people who are dealing with grief is important. And I think that people just like to know that we’re not alone.”

Marty Gonzalez, a BECA professor, who interviewed Kennedy on Kron 4, praised Kennedy and her ability to write such a personal book.

“Michelle is a gifted writer who has the ability to touch on universal issues such as coping with the death of a loved one. It is rare that someone is willing to share her emotions and thoughts following one of the most traumatic experiences of her life,” Gonzalez said.

Her book wasn’t only about dealing with the death of a loved one, it also followed her experience of traveling across various countries. As Gonzalez puts it, she “gives the reader a front row seat as she travelled throughout 11 countries.”

“The book is a balance. I didn’t want want to have a book with all grief and I didn’t want to just have a travel book, so it was good to marry the two,” Kennedy said.

Kennedy will be doing a reading and book signing at the Avid Reader bookstore in Sacramento on Oct. 1.