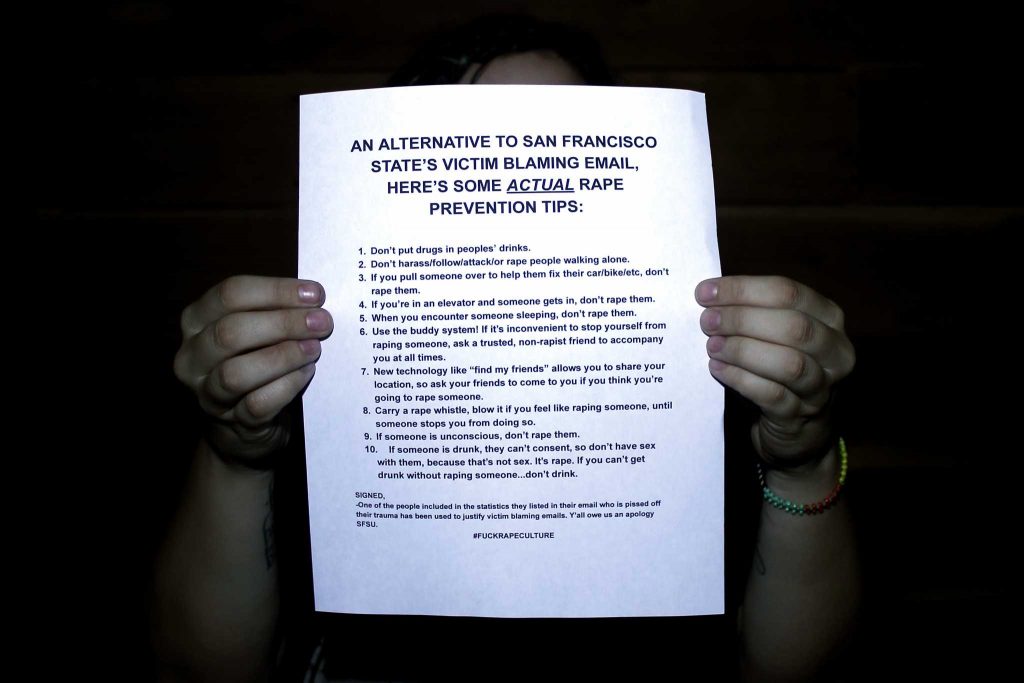 The author of the anonymous letter mocking SF State’s campus­wide email about Title IX efforts stands with their letter in their home in San Francisco on Monday, Sept. 19, 2016. The SF student explained their reasoning behind writing the letter in an interview with the Golden Gate Xpress.

In response to a campus-wide email sent out by Luoluo Hong, Title IX coordinator and vp of student affairs, a student wrote an open letter accusing SF State of victim blaming and perpetuating rape culture.

The author explained their intent in an interview with Xpress.

The student, who asked to remain anonymous, posted copies of the letter along hallways across campus with a heading that read “AN ALTERNATIVE TO SAN FRANCISCO STATE’S VICTIM BLAMING EMAIL, HERE’S SOME ACTUAL RAPE PREVENTION TIPS.”

“After I read (the email), I was sitting and fuming over it. I was trying to figure out a way to respond and be heard,” the student said. “I think that if they’re going to try to promote some kind of prevention tip, it should be what I wrote.”
Hong praised the student letter during a panel at Rights and Wrongs: A Constitution Day Conference during her presentation on the history of Title IX and how campuses are addressing sexual violence.

“What we welcome is the dialogue. I’ll be honest, I appreciate the engagement that created an opportunity for many dialogues that we’ve had in the last week because that student had the courage to post that flyer,” Hong said during the conference.

Hong said they have since edited the email and acknowledged  “we will never create the perfect email.”

The student explained that the email emphasized the consequences of excessive drinking, but did not stress the repercussions of drugging or raping others.

“The tips they gave don’t prevent rape, it just puts the fear of getting raped (in people),” said the student.

The student decided to participate in a campus-wide survey that was sent out to students regarding sexual violence on campus after they were sexually assaulted. The student said they fell under two categories presented in the email: “8.2 percent had experienced sexual touching without their consent” and “2.1 percent had experienced sexual penetration without their consent,” according to the statistics provided in Hong’s email.

“I remember thinking to myself, ‘if I take the survey, I can help somebody,’ and then we get the results and it’s used to justify rape prevention tips (which are) used to justify victim blaming and perpetuate rape culture,” the student said.

They emphasized that SF State needs to shift the conversation from victim blaming to educating students on sexual assault and consent training.

“And less of this shit: ‘at a bar or party, avoid leaving your drink unattended or accepting drinks from individuals you do not know… And remember that alcohol is the most commonly used ‘date rape’ drug!’” the student recited the tip from the Title IX email. “You could totally reword that so that the victim is not the one having to do something.”

However, the student said the email did a good job of providing support resources for students such as SAFE Place. SAFE Place is an on-campus resource center, located in student services for sexual violence prevention and crisis intervention for students.

Students and faculty have also commended the student for writing and posting the letter around campus.

“I think it’s terrific,” Deborah Cohler, a professor of Women and Gender’s Studies said. “I didn’t have the context of the original letter that the Title IX office sent out, but I appreciated the student response. I thought it was fantastic.”

Some letters have been taken down on campus, but the student was glad the letter reached people. The letter has been discussed in some of their friends’ classes. The student said they wish they could have reached as many people as the school email did.