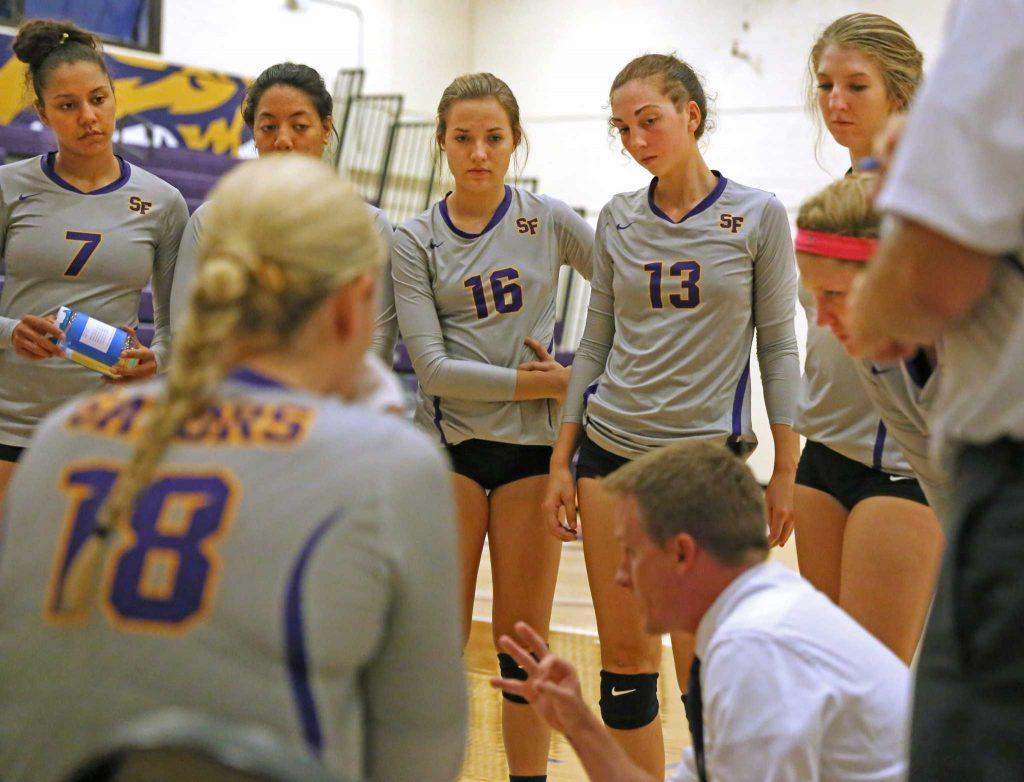 SF State Gators’ head coach Matt Hoffman talks with his team during their loss against Sonoma State University at the Swamp on Saturday, Sept. 17, 2016. The Gators fell to the Seawolves in three straight sets.

The SF State Gators women’s volleyball team showed significant improvement but couldn’t handle the Sonoma State Seawolves, unable to win a set for the third consecutive game. Their losing streak extended to five matches, and they haven’t notched a single victory at home.

According to head coach Matt Hoffman, despite the loss, he believes his team made improvements that can carry into upcoming games.

The game started off tight for both teams with each exchanging points in the first set. The Seawolves appeared to find their rhythm early and took advantage of the Gators’ defensive miscues to close the set 25-18.

As the game progressed, the Gators seemed to fight harder. The Gators battled from behind in the second set and kept it close without allowing the Seawolves extend their runs but lost 25-21.

The Gators’ strong play carried onto the third set. With the game tied at 14-14, the  momentum seemed to swing in SF State’s favor, but the Gators became stagnant. The Seawolves took advantage once again with an 11-4 run to close out the Gators 25-18 in the final set.

The maturation of Gators’ true freshman libero, Emily Johns, played a significant role in the team’s improvement against the Seawolves. Johns recorded a game and career-high 18 digs.

“The key was adjusting to the other team and making our adjustment based on what they were doing and that helps us with our success,” Johns said.

Outside hitter Haley Halpert also played a big role in the game tallying a game-high 12 kills on 29 attempted. Halpert said the team looks forward to correcting the mistakes made today that were key in the Gators’ loss.

“I think we didn’t adjust well to the serve,” Halpert said. “To better prepare for the next game, is for us to recognize those serves.”