Fight to end housing and food insecurity spreads across campus 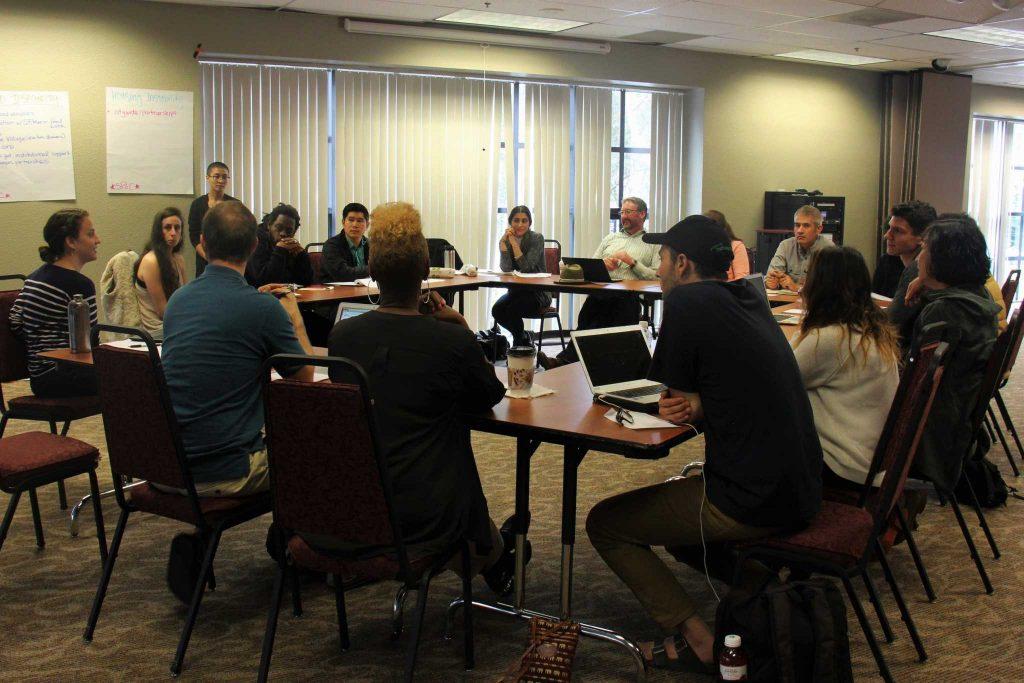 The Ad Hoc Advisory Work Group Responding to Food Insecurity and Homelessness at SF State’s co-chair, Aimee Williams (farthest left) leads a discussion at a meeting on Sept. 9 at the Tower’s Conference Center. Meeting attendees review data from the February 2016 CSU Chancellor’s report, participate in brainstorming sessions and discuss how future meetings should be structured.

A new group’s campaign to end housing and food insecurity at SF State has gained momentum in recent weeks thanks to growing support across campus.

What began in August as a collaboration between Health Promotion and Wellness, Residential Life, Associated Students, Inc. and the Dean’s Office has officially become The Ad Hoc Advisory Work Group Responding to Food Insecurity and Homelessness at SF State. The group has rapidly grown since its inception, as new partners continue to emerge from establishments all over campus including: City Eats; Student Resource Center; Department of Urban Studies and Planning; and the Public Health Organization of Graduate Students.

“I swear every week there’s another person who wants to get involved or another connection being made,” said Lead Health Educator Aimee Williams, who co-chairs the group with Director of Residential Life David Rourke. “Every week, even every few days it’s changing. It snowballed super fast, so I think we’re still trying to figure out what direction we are going to go in.”

“My preference and request to the work group was to focus on those strategies especially that are institutional, systemic in nature, so that the burden for reducing the impact of food insecurity and homelessness does not just fall on the students who are being impacted,” Hong said via email.

“You want to be able to provide services, but you don’t want students to feel ashamed for seeking help,” Montgomery said following the group’s latest meeting on Sept. 9. “We have to find a way to relieve that stigma and provide discrete services that students actually want to access.”

The group is taking a multipronged approach to addressing food insecurity with ideas for food pantries, a program for donating excess meal points to needy students and an app for locating leftover food from meetings or events on campus. The group is determined to find solutions tailored to the needs of the SF State community, Williams said.

“If you look at a lot of the different (California State Universities) they all kind of do something, but they do it in a different way,” Williams said. “There’s all these different models so we’re trying to figure out what would really work best for our students.”

She said instead of traditional food pantries, Cal Poly San Luis Obispo’s program allows students to pick out fresh fruits and vegetables, Fresno State’s is set up like a supermarket and San Jose State has shelves with perishable food items dispersed throughout campus.

A major catalyst for the group’s effort was the release of a CSU Chancellor’s report in February, which presented data from a CSU-wide survey on homelessness and food insecurity from the perspective of staff, faculty and administrators.

“Having the CSU Chancellor’s report really helped put (these issues) to the forefront of people’s minds,” Williams said. “It allowed us to say, ‘We have some data, this is an issue and now we really need to start addressing this.’”

CSU Long Beach professor Rashida Crutchfield, the principal investigator of the study, said that prior to the study’s publication many campuses did not highly prioritize these issues.

“This kind of study really is very rare,” according to Crutchfield, who said the study has helped spotlight areas where campuses are succeeding or falling short. “People are becoming more and more aware that issues of food and housing insecurity exist and as campuses are developing programs we need to know who is doing what.”

Later this fall Crutchfield will lead the study’s second phase, which will directly target students via a new CSU-wide survey and focus groups on ten campuses.

“If as many students as possible can participate that helps us understand what’s going on, which helps us better support the campaign and determine best strategies,” Crutchfield said.

Understanding the state of these issues on campus is a the first step in the process, according to Williams, who said the SF State group plans to gather their own data soon.

“We’re trying to get a sense of what’s going on,” Williams said. “There isn’t really a lot of robust data about our students on campus so we’re trying to figure out some of that information.”

In the upcoming months, the group plans to create a new survey and hold focus groups to solicit as much student input as possible, according to Williams, who said several professor have already begun offering their assistance.

“We‘re starting to bring this into the academic side, so potentially some classes can help create the research and use that as a practical learning application,” Williams said.

While a majority of the proposals are still in their infancy, students can expect two new services from the group very soon. This semester, SF State’s Farmer’s Market will begin accepting EBT and a new program will offer students guidance through the Calfresh enrollment process. Tentative dates have been set for each program’s launch and will be announced in the coming months.

“Some things are going to take a really long period of time so right now we’re just trying to identify really what are our potential short-term options, midterm options and long-term options,”  Williams said. According to Williams,the group has primarily focused on food insecurity due to the complicated nature of housing.

Williams asked that students be patient and recognize that finding solutions will take time.

“We can’t go from 0-60 immediately and what we end up with may not be perfect or the best on the first iteration, but we want to at least implement something so that we can start helping students and then refine it as we go along,” Williams said. “But I want students to know that I’m fighting and my co-chair is fighting and we’re working really hard to try and do this.”

The meetings, which are open to the public, are held every other Friday at 12 p.m. in the Tower’s Conference Center. The next meeting is scheduled for Sept. 23.