The Associated Students, Inc. Executive Board, consists of a selection of leaders from student government, with aims to encourage collaboration across the campus in addition to serving as a resource for student groups and organizations. New board members stressed the need to improve unification at SF State and said they welcome student input. To learn more about each board member, hover your cursor over the camera button in each photo. 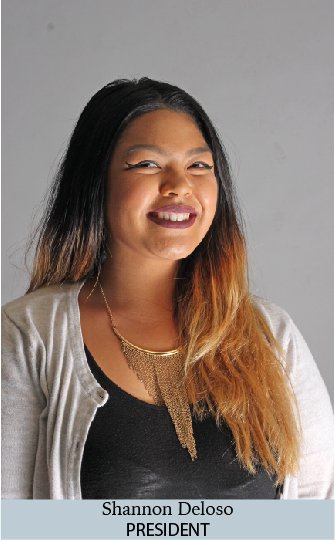 Shannon Deloso, president
Major: Asian American studies, with an emphasis on race and resistance and education
Year: Senior
Age: 22
Shannon Deloso, the new president of ASI, previously worked as the ethnic studies representative and was involved with Project Connect, one of the ASI programs that provides internship, career resources and aid.

“Being president was never in my mind, but from ethnic studies I really blossomed as a student leader and experiencing student activism really pushed me,” Deloso explained.

As president, Deloso’s highest priority is to tackle the universal problem of student-ASI disconnectedness that other members of the executive board have recognized and to increase and improve student involvement on campus.

According to Deloso, to try to increase student involvement on campus, ASI will be holding a monthly town hall meeting that will be open to all students and will help introduce the members of ASI, starting on Sept. 28.

“I made a personal goal that every moment in leadership, or some part of the experience, increases personal inter-student communication,” Deloso said.

The new president isn’t afraid of challenging herself and says she wants to be able to connect with all different types of students- ethnically, culturally and academically.

“I already have a close-knit community from where I’m from, but I love learning about people and helping to provide the tools they need,” Deloso said. 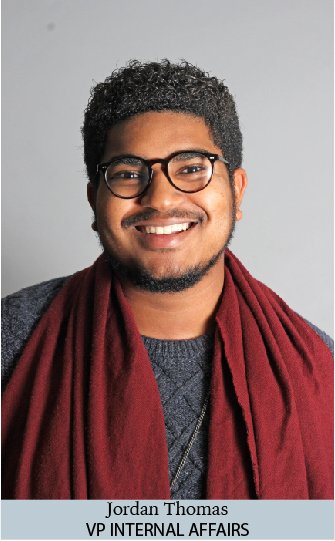 Thomas said when he first discovered ASI’s events and services, it helped him feel closer to the SF State community.

“I didn’t do much my first year and then I found services at ASI and felt more welcome and I did more,” he said.

Thomas explained that he wants to be able to help students connect to projects and programs that ASI offers, as well as create a stronger student body presence on campus with events and activities.

To help mitigate the sense of disconnectedness Thomas believes is present between ASI’s resources and SFSU students, Thomas said he would like to work more on the student life and engagement assembly.

The new structure of ASI now allows students to occupy higher positions within student government,  Thomas explained. This change is advantageous, according to Thomas who said it helped facilitate the recent creation of open, monthly town hall meetings and promotes improved collaboration with President Les Wong when conflicts arise.

“I want students to feel like they are part of something bigger, and I want to work for the betterment of the campus as a whole,” he said. 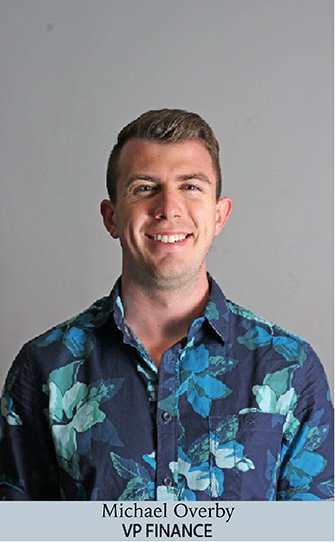 Michael Overby, vp finance
Major: Broadcast and electronic communication arts
Year: Senior
Age: 21
The biggest issue Vice President of Finance Michael Overby wants to take on this semester is eliminating the tiered increment funding model for student organizations and replacing it with a new funding method that is more sustainable for these organizations.

The current tiered model significantly limits student organizations’ ability to obtain funding, according to Overby who said funding levels for each organization depends on which tier the group fall under. Out of the 275 student organizations on campus, only those at the highest tier are able to apply for the largest funding request of $4,000.

“This is an issue, because 40 percent of the money that’s there for all 275 student organizations, is only going to 10 organizations on campus,” Overby said.

To help fix this issue, Overby would like to create a student ad hoc assembly for funding.  Overby said he and other board members have come up with legislation to change the current funding model, which is likely to be enacted.

Another issue Overby plans to address is making organization fundraising easier for students.

“There can be barriers for fundraising since it requires a lot of effort and manpower,” Overby said. “I want to be able to remove these barriers, which is another goal for me.” 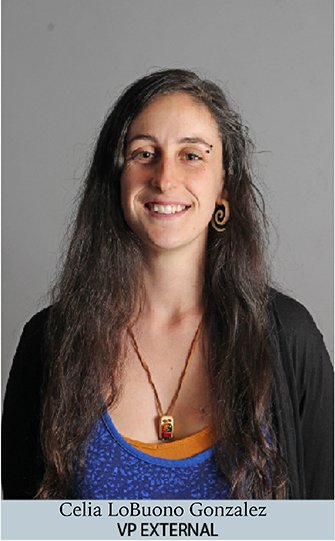 Celia LoBuono Gonzalez ,vp external
Major: Communications and geography
Year: Senior
Age: 23
Getting students to have a stronger voice in the community is a challenge Vice President of External Affairs Celia LoBuono Gonzalez is eager to tackle. Part of this challenge is making ASI and its programs more accessible for students and ensuring that students have resources that help them thrive and succeed.

“One way of encouraging an environment for student participation and success, is to create college assemblies, which could let students, faculty and administration ‘work collaboratively’ with each other,” Gonzalez said.

Part of  Gonzalez’s overarching goal for the semester is to establish a stronger student presence with local and state officials and legislature.

“Unfortunately, education can sometimes be treated like the middle child and not get enough attention,” Gonzalez said. “The more visible and united we are, the more we can change and work toward getting the success of students to be the number one priority in the state CSU.”

Gonzalez said creating a more unified and visible student body is one of her highest priorities this year. 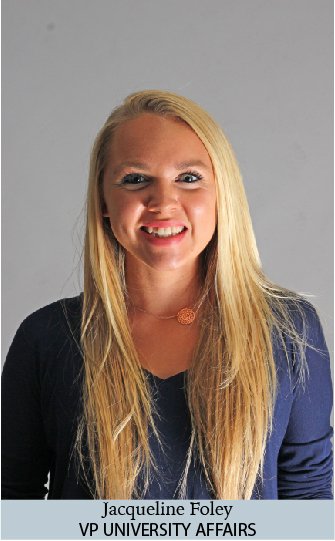 Jacqueline Foley, vp university affairs
Major: International relations
Year: Junior
Age: 21
Transitioning to the position of vice president was a big change for 21-year-old Jacqueline Foley, the new vice president of University Affairs, who is also the president of athletics. Foley said she is most excited about kick-starting the College Department Assembly, which will have a representative for each college here on campus.

“I’m very excited to be part of ASI and to work with the new assemblies,” according to Foley, who explained being a new member of ASI and getting involved in its new projects adds this sense of excitement for Foley.

Becoming the new VP for ASI also produces certain challenges, such as making sure that students and faculty in each department get the representation that they deserve, Foley explained.

Foley said feedback from students and faculty from each department consistently reflected a sense of not being fully represented.

Creating new government structures and communicating with everyone is a way Foley will try to mitigate this problem during her time as VP of University Affairs.

“I’m excited to get the ball rolling and find representatives for each college,” Foley said.

Another important goal of Foley’s is to create an open space where students can come and talk about issues that are most important to them. Foley loves talking to students from every walk of life and providing a support system, so she will be creating VP office hours, where people can drop in and chat with her.

Foley said she was inspired to set this goal for herself and ASI after witnessing the mass amounts of student protests last year.

“When I saw that we had a hunger strike, getting students voices to matter became important,” Foley said. “Creating a space where students have a place to put their issues on the table before it become a big issue and helping students is where my heart is.” 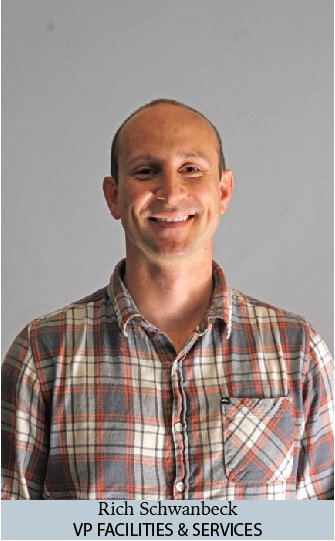 There are many long term goals for Schwanbeck, such as working through reconstructing the government to include college assemblies. However, he is most enthusiastic about getting more student involvement and engagement with ASI.

Schwanbeck said, “Having an increased effort to increase student engagement and to create a robust student culture,” is something he wants to work on for this semester and the coming year.

To help mitigate this, more committees that invite students to come and participate should be created, according to Schwanbeck.

However, Schwanbeck said the various college assemblies that are being created should help to “increase student engagement.”

“Hopefully, students will be enthusiastic about this. When students raise their voices in mass, then the administration listens,” Schwanbeck said of working to get students’ voices heard. 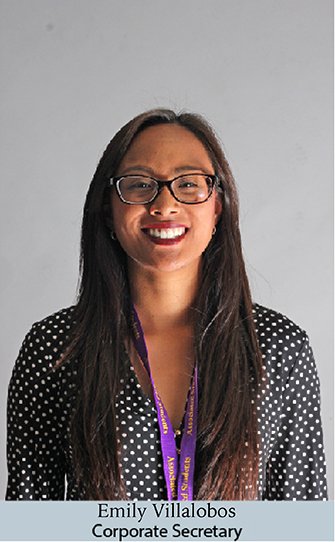 Emily Villalobos, corporate secretary
Major: Communicative disorders and minor in special education
Year: Senior
Age: 24
Starting her first semester at SF State as a transfer student, Corporate Secretary Emily Villalobos looks forward to getting to know all of her fellow executive board members this semester.

According to Villalobos, she has never been part of a student government before, but became interested in joining when she received an email that listed all of the open positions in ASI.

“I got an email about open positions and I was interested in the graduate representative. Then I saw that corporate secretary was open. It is a perfect fit for me since I love helping people,” Villalobos said.

Despite still settling into the new position, Villalobos said she has already set goals for herself.

“I love ASI so far, and it is a great organization, but as a board member I feel that we all need to come together and get to know each other since we’re all new,” Villalobos said.

Villalobos offered a variety of suggestions to help the board members become better acquainted.

Some of her ideas include, “having hangouts outside of meetings and getting together for a study hall and creating a meeting attendance policy.”