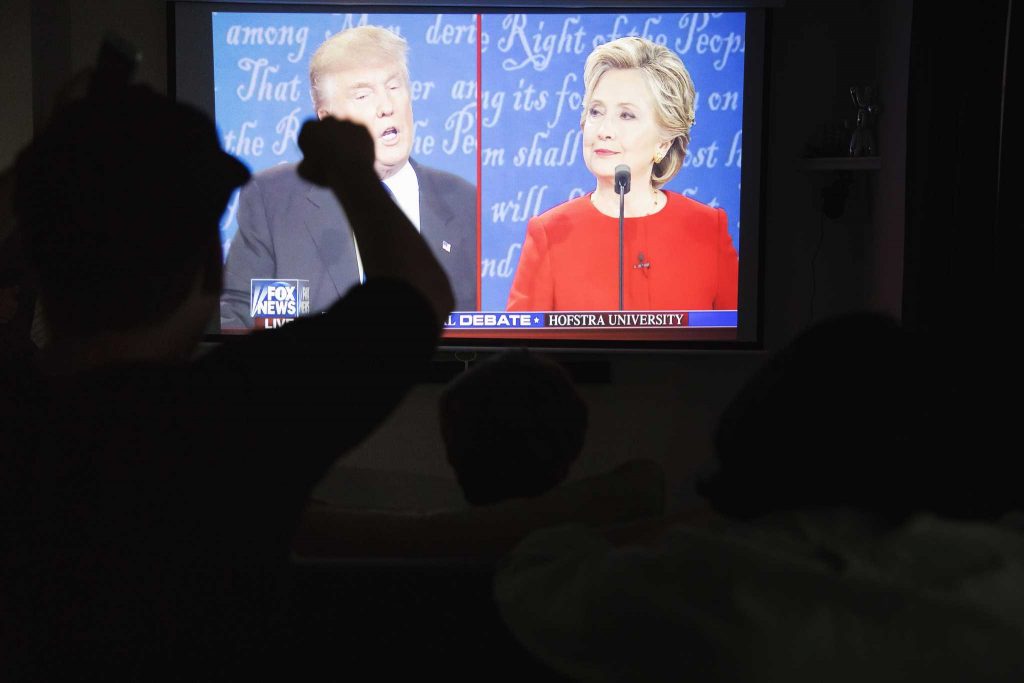 Members of SF State republican student union watch the first presidential debate between Donald Trump and Hillary Clinton in a house at Parkmerced on Monday, Sept. 26, 2016.

On a warm Monday evening, television screens flickered and heated discussions boomed as students both on and off campus watched the first presidential debate of the 2016 election.

In Parkmerced, the Republican Student Union, led by club president John Byerly, gathered to watch the debate at the home of their vice president Brian May.

“Clinton is sponsored by Wall Street,” Byerly said. “It’d be nice if she actually taxed the top one percent but she’s not going to. She’s just saying that for the votes.”

Across the city, a viewing event at Hi Tops, a bar on Market Street, was co-hosted by College Democrats of SF State and attracted a wide range of democratic activists and passionate Clinton supporters.

“Trump is categorically unfit to deliver any response on national security issues. He talked in circles the entire debate to avoid an actual factual and policy-based discussion,” said 20-year-old Jordan James-Harvill, political science major and president of the club.

Meanwhile, students at the City Eats Dining Center on campus watched the debate on the numerous screens in the center.

“With the question of race relations in America, I feel like Trump wasn’t really addressing the question and was instead addressing himself and his success. There is no context or background information to what he’s saying, “Batalla said.

While Batalla said he is still undecided on who he is going to vote for, he did have a strong opinion concerning Trump.

“He is kind of dumb and I predict that Hillary will win since she is just more knowledgeable,” Batalla said.

Freshman Chris Kwon looked up from his plate from time-to-time to glance at the pre-debate coverage said he mainly watched for entertainment value.

“I’ve never really been into politics, it’s just something in the back of my mind and I’m not sure if I’m going to vote. Going into the debate, I’m just not that positive about each candidate,” Kwon said.

Jacob Mata, an 18-year-old political science major, was excited to watch the debate but admitted the debate wasn’t going to sway his vote. Mata said that he was most excited to see whether Trump was going to going to be “mature.”

“It will be interesting to see how they go against each other,” Mata said. “I’ll probably vote for Hillary even though I don’t like her and I will be holding my nose while I do it.”

Not all students who watched Monday night’s debate are eligible to vote in the upcoming election, however it didn’t stop 17-year-old Rosa Cruz from cheering on her favorite candidate during the debate.

“I turn 18 after the election but I’m still rooting for Hillary, since the things that Trump says are unbelievable and bizarre,” Cruz said.

Monday night’s debate between the two candidates is the first in the presidential debate series. The next debate will be a town hall meeting and take place on Oct. 9 at Washington University in St. Louis, Mo. and will air on CNN at 6:00 p.m. Pacific time.