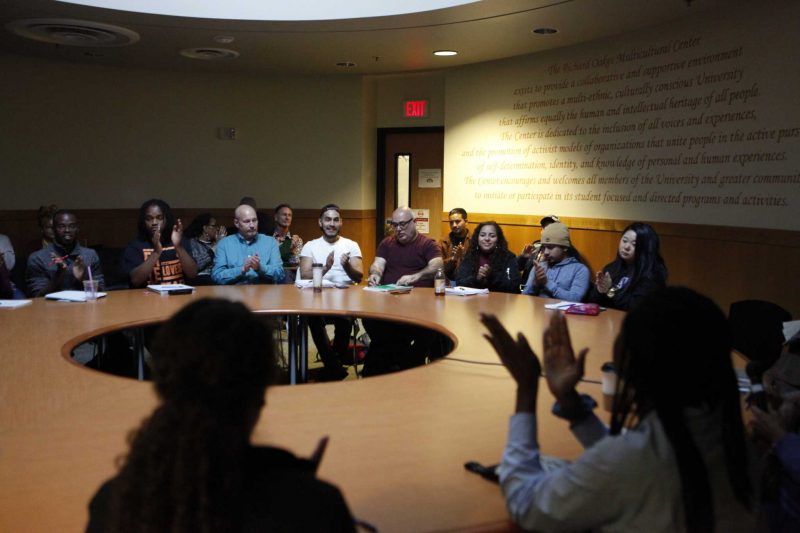 Students and faculty filled the Richard Oakes Multicultural Conference room on Thursday for a film screening that shared a personal look into Afro-Cuban history and culture.

Guest filmmaker, Gloria Rolando arrived from Havana to co-present her new film “A Dialogue with my Grandmother,” with Kym Morrison, assistant professor of history.

In the opening scenes of the short film, Rolando, whose voice-over narrates the film, says she believes when we write down history, we make room for family and loved ones.

Rolando makes room for her family history as the film recreates a conversation she had with her grandmother in 1993. Through the audiovisuals, which incorporate documentary and fiction, Rolando tells the personal history of her grandmother, Inocencia Leonarda Armas y Abreu. Abreu is the main character throughout the film, and although she is played by actors, her real voice can be heard in the conversation that is the central theme of the film.

The conversation is an intimate view of the relationship Rolando had with her grandmother and relates memories of Afro-Cuba’s history and culture. While providing an account of Rolando’s family history, the cassette recording between Rolando and her 90-year-old grandmother also evokes the tangible love and affection the two had for each other.

One of the many elements that portrayed the diversity and richness of Cuba in the film was the music. Son, Cuba’s official music, was present throughout the film. The choice of songs revealed aspects of traditional Cuban spirituality and contributed to the lively tone of the film.

“All these songs were created by people.” Rolando said. “They were sung in one way in one house and another way in another house. I didn’t have to pay rights for them because they belonged to people.”

The film often focuses on Abreu’s hands, a stylistic choice by Rolando meant to highlight the type of domestic labor that is often invisible, but requires much energy and dedication.

Abreu spoke to Rolando about a time when societies in Cuba were divided between races and of Rolando’s Congo-born grandfather and the traditions he brought from his country.

Following the screening, some of the audience responded with enthusiastic remarks about the film.

When asked by professor Morrison if recent growing autonomy in Cuba has facilitated her work, Rolando said it was still very hard because production in Cuba is based on funding and there are limited resources. Rolando said that free education allowed her and other Cubans to develop their craft and, despite the lack of resources, they maintain their artistic and cultural traditions.

Torina Craig, instructor and counselor at City College of San Francisco, asked where she could find more of Rolando’s work. Rolando replied that some of it can be found at afrocubaweb.com.

At the end of her exchange with the audience, Rolando recommended people engage in real conversations like she had with her grandmother.

“In the present, there is too much technology separating people. I don’t know how people fall in love,” Rolando said, eliciting laughter from the audience. “Get close to your elders. It is the biggest treasure you have in life.”