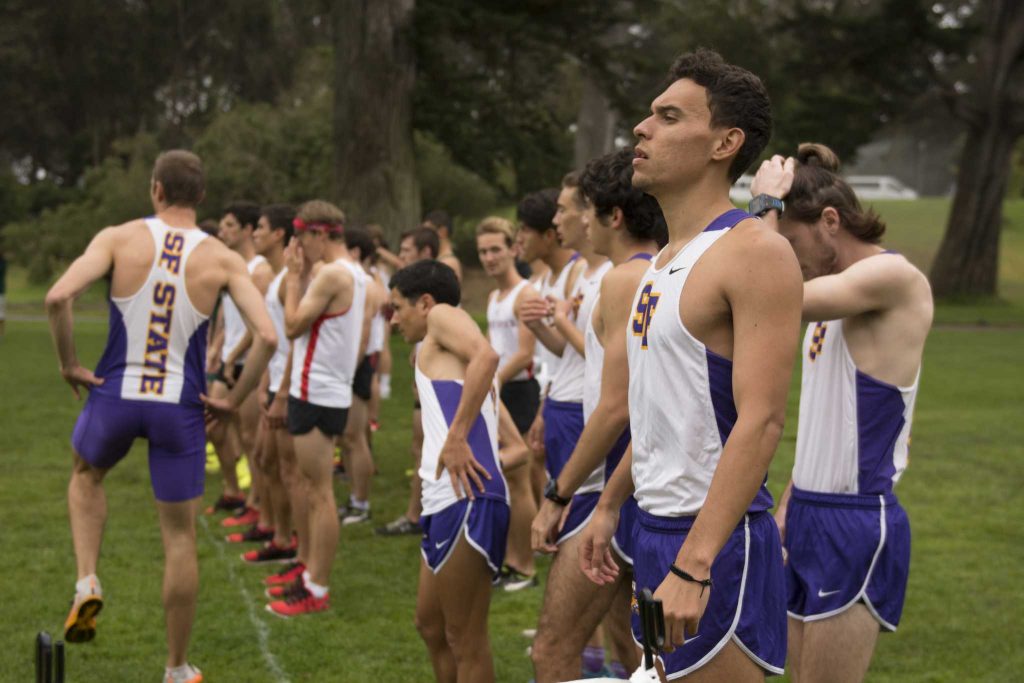 Growing up in the small Southern California city of Placentia, Benji Preciado started playing baseball at the age of seven. His love for the sport grew through his high school years at Valencia High School as he continued playing with hopes of extending his career to the collegiate level.

Preciado’s athletic dreams took an unexpected turn his freshman year of high school when his older brother convinced him to join the cross-country team. What originally began as a way of conditioning for baseball during off season, revealed itself to be an untapped talent.

Preciado ran throughout high school and despite childhood dreams of becoming the next Adrian Beltre, he could not deny his talent and future in running as he received recruitment offers from several colleges during his senior year.

He wasn’t initially recruited by SF State, but he decided to apply for the men’s cross country team on the SF State Gators athletics website. Preciado said that within an hour of filling out the application, he received a phone call from the SF State Athletic Department. They were interested in Preciado and wanted to see him run.

“Just watching him figure out how to emerge out of the pack and watching him run you could tell he was going to be a good runner down the line,” Lyons said.

The decision was certain for Lyons and SF State, but Preciado remained unsure. He had lived in Southern California with his family his whole life and was wary of the change.

The youngest of three children, Preciado said he looked up to his older brother and sister as parental figures and went to them for advice.

“My brother told me ‘if you want to leave, just go, it’s a once in a lifetime opportunity,” Preciado said. “So I decided to come, get away from home, be on my own and have an adventure.”

Preciado was redshirted his freshman year, so he only ran two races his first year on the team, a factor he said allowed him to acclimate himself to the change of scenery.

“I wanted to explore before the next year when I was going to be put in uniform,” Preciado said.  “I knew I had to buckle down and do business.”

Preciado made the most of the races he did run during his redshirt season, maintaining a place at the head of the pack and narrowly missing out on a nationals qualification by a couple seconds at the NCAA Regionals.

“Somebody stepped on his shoe at the beginning of the race, he ran the race with his shoe half off and he almost made it to nationals like that,” Lyons said in amazement.

Preciado said after his first season he analyzed his strengths and weaknesses in order to train for the next season. “I knew what I had to do to put myself with the top runners in the region,” Preciado said.

Preciado has done just that, continuously breaking his record times throughout the years, most recently running his personal best in the 10K this season with a time of 32:21.50., Preciado also ran his career best in the 8K at the end of his 2015 season, with a time of 24:35 during the CCAA Championships, coming scathingly close yet again to nationals at  the NCAA Division II West Regionals.

Preciado’s consistency and persistence to run harder and faster each season has lead to him recently being named California Collegiate Athletic Association Runner of the Week (Sept. 19 to 25).

“Whether it’s track or cross country, there is no question that he is one of the best distance runners in the history of the school,” said Lyons.

Aside from his tiring training schedule, Preciado is working to earn his Bachelors of Science in kinesiology, a rigorous major requiring a heavy workload and technically advanced courses.

Preciado said this last semester is mellow, but in previous semesters he would take up to 16 units while balancing running and maintaining a social life.

“Oh man, it was difficult,” Preciado said. “I would run, go to class, try to study as much as possible and then repeat.”

Preciado said for him, the key to keeping it all together through the stress and pressure was making sure he got at least eight hours of sleep every night.

“I wouldn’t study past 11 because I knew if I did I wouldn’t grasp what I was trying to learn,” Preciado said. “So I would just call it a night go to sleep and do it all again the next day.”

Preciado’s diligence in keeping his body healthy and rested helped him stay strong not only physically, but academically. Preciado made Honor Roll and Dean’s List both Fall 2014 and Spring 2015, as well as Athletic Director’s Honor Roll Spring 2016.

The ability to know what’s best for his health, mind and body is one of the characteristics fellow teammate and friend Kenny Trejo admires most in Preciado.

“A lot of times after we would have a hard workout, the next day a lot of the guys would want to keep going and pushing a little bit harder,” said Trejo. “But Benji kind of had this motto that he wanted to listen to his body and care about it in the long run.”

Lyons said Preciado has learned what works for him and has become an efficient runner as well as a smart trainer.

“Some runners will put 100 miles in for the week and I know that if I put in 100 miles that will harm my body and break me down,” Preciado said of his conservative training style.

Though Preciado has dedicated the past nine years of his life to running, he said his future in running is uncertain.

“I’m in a pickle right now,” Preciado said. “It’s between letting my body rest or just keep on going.”

Preciado said he wants to focus more on his future career goals, which include applying to chiropractic school in Southern California next month. If accepted, he will start in the spring of 2017 and with long hours and heavy workload required, he will have little to no time to continue running.

Either way, Preciado will head back home to Placentia after graduating in December, a decision he said his parents are quite happy about.

Preciado prides himself on being a family man and a self-proclaimed “mama’s boy”. He said his family means everything to him and they are very close.

“They’ve been very supportive of me,” Preciado said. “From me making the decision to leave to cross country, our dynamic I think is one of the best.”

Throughout his five years on the cross country team, Preciado’s teammates have become an extension of his family. He said he cherishes the memories that have been made and the comradery that has been built within his small group of teammates.

Trejo said some of his favorite memories of Preciado involve his motivation through his naturally competitive nature.

“I remember last season we were closing in on the last 200 meters and Benji tapped me on the waist and told me that if I don’t beat him during regionals I wouldn’t hear the last of it from him,” Trejo said as he laughed at the memory. “He wanted me to do my best and that kind of confidence is something I’ve always counted on Benji for.”

Trejo said he is certain that Preciado will excel in whatever he decides to do.

“Benji is one of the hardest workers in terms of going after his internships or going after his career,” Trejo said. “He’s always been very driven and very self-confident in his hard work and ethics and he is not someone who is going to settle, he’s going to keep going for more.”

Until then, Preciado said in the back of his mind his goal is to make it to NCAA Div. II nationals, but more importantly, he wants to enjoy his last semester as an SF Gator.