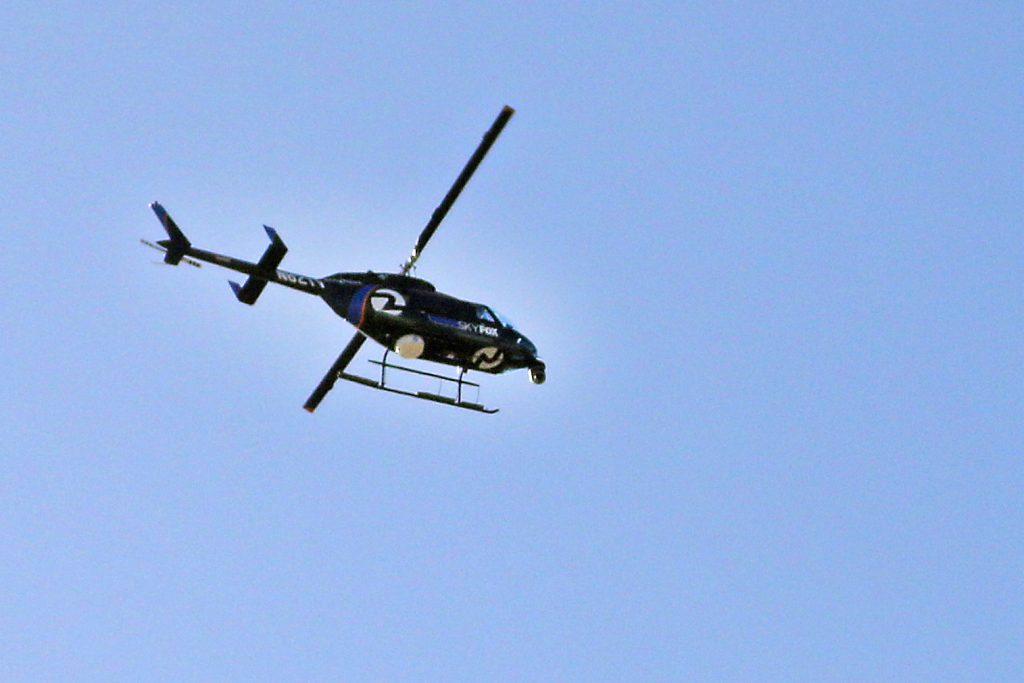 A SkyFOX helicopter hovers over Malcolm X Plaza for the pro-white group Identiy Evropa event titled No Sanction on Monday, Oct. 17, 2016. The group did not arrive after posting a Twitter post about their proposed gathering. (George Morin/Xpress)

A news helicopter hovered over Malcolm X Plaza today as students and faculty gathered for a planned rally by a European heritage advocacy organization, but the group unexpectedly changed the location of the protest.

Identity Evropa, an “organization dedicated to promoting interests of people of European heritage,” according to their Facebook page, retweeted a post from Red Ice Radio stating its plans to host a rally at SF State protesting against San Francisco’s status as a sanctuary city.

Red Ice is a media organization based in Sweden and the U.S. with the goal of “seeking an alternative to the mainstream, covering politics and social issues from a pro-European perspective,” according to its website.

According to the tweet, the event was scheduled to take place in Malcolm X Plaza, but it actually occurred at the Embarcadero after Red Ice began its live stream of the event at 3 p.m.

The exact reason for the change in location is unknown, but some speculated it could have been to mislead counter protesters.

“Based on observations, they used this as a decoy and then went downtown,” said Elizabeth Smith, associate vice president for marketing and strategic communications at SF State.

Nester Castillo, a Latino/Latina studies lecturer, said he brought his students out to watch the protest, hoping it would be an example of the current political milieu.

“As soon as I found out about it, I thought it was important to see the political climate as of right now,” Castillo said. “This exemplifies the rise of Trump and new nationalism.”

As of this time, Identity Evropa has not provided a comment on the cause of the location change or if it has plans for a future rally at SF State.